Shaheen and his wife Azlim .. the “dream team” behind the... 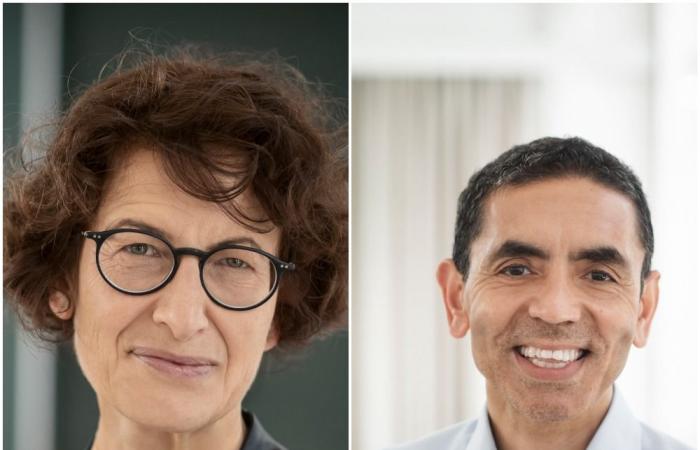 The Pfizer and Biontech vaccine was able to offer the world a boost of hope, after its results showed more than 90 percent effectiveness, but who is the “dream team” that managed to achieve this?

According to a report published by Reuters, this team includes Ugur Shaheen and his wife Azlim Toriichi, who have devoted all their lives to searching for ways to boost the immune system, especially against cancer.

Shaheen is the CEO and founder of the German biotech company Biontech, and his wife, Toriichi, is a co-worker and board member of the same company.

Shaheen, 55, is one of the 100 richest Germans who traces his origins to Turkey, as his father is a Turkish immigrant who worked at the Ford plant in Cologne.

The market value of the Nasdaq-listed company Biontech, which the couple co-founded, is about $ 21 billion, and it was only $ 5 billion a year ago.

Member of the board of venture capital firm Meg AG, Matthias Kromaire, which has supported Biontech since its inception in 2008, said that Shaheen “despite his accomplishments, has never changed from being modest and incredibly elegant.”

He added that Shaheen usually walks to business meetings, wearing jeans, and carrying a bike helmet and backpack.

Shaheen, the son of the Turkish immigrant, persistently pursued his childhood dream of studying medicine to become a doctor, and worked in teaching hospitals in Cologne and Hamburg, where he met Torici during his early academic career, and medical research and oncology became a common passion for them.

Toriçi, the daughter of a Turkish doctor who immigrated to Germany, had stated in a media interview that even on their wedding day, they both made time to work in the laboratory.

The couple began their career in medicine and more entrepreneurship in 2001, and founded the company “Ganymed Pharmaceuticals” to develop antibodies to fight cancer, but Shaheen was a professor at Mainz University, and he never gave up academic research and education.

After winning funding from Meg AG and Thomas Anders Stringman, Ganymede Pharmaceuticals was sold to Novartis in 2005, which it later sold to Astillas, Japan in 2016, for $ 1.4 billion.

In 2008, Shaheen, his wife and a team of scientists were busy establishing “Biontech”, to pursue research into finding immune system treatments for cancer.

Last January, after talking about the Corona virus began, Shaheen appointed 500 people in the “Biotank” company, to work and search for possible treatments and vaccines, and then entered into a partnership with Pfizer and the Chinese company Fosun in March.

Professor of oncology at Mainz University, Matthias Theobald, who has worked with Shaheen for 20 years, said, “His tendency to downplay contradicts an ambition and a turning point in medicine, through a major breakthrough in finding a Corona vaccine.”

“He is a very humble person. Appearances mean little to him,” he added.

These were the details of the news Shaheen and his wife Azlim .. the “dream team” behind the... for this day. We hope that we have succeeded by giving you the full details and information. To follow all our news, you can subscribe to the alerts system or to one of our different systems to provide you with all that is new.