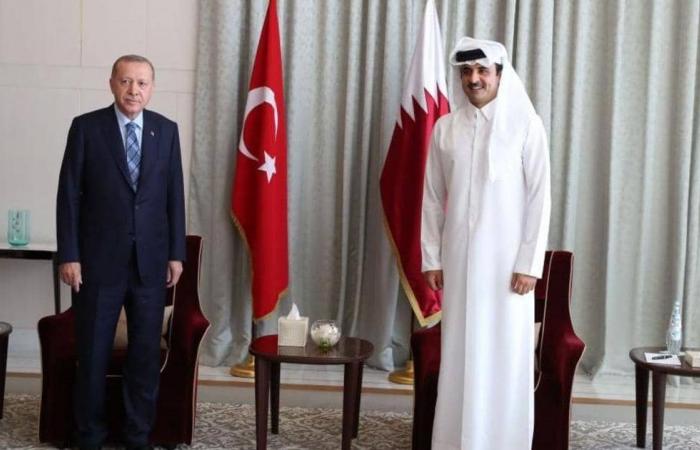 It is not about solid level of Political alliance Between the two sides, Turkey interfered in all these files, without any consultation or Qatari military, security or political participation, except for some symbolic contribution to that. Rather, the Qatari role shifts to be financial only, or more precisely as financing. It is a strategy Erdogan Intervention in foreign files has always lacked financial vitality, for two complex reasons: Turkey is not a country rich in resources, and most of the security services’ resources come from the army and defense ministry’s budget, and it cannot dispose of them outside the provisions that are approved.

The other thing is about structure Turkish political systemAll the forms of totalitarianism that Erdogan has been trying to impose for years did not entitle him to an absolute ruler over the country, as there is some opposition and an independent media, which he has not yet been able to obliterate, and therefore he cannot implement funding campaigns for armed militias, because that will be observed by these forces, And she will expose him because of that.

Qatar was the answer. Most sober reports say about funding sources.Turkish militiaAccording to the simplest calculations, the number of these militias in Syria, Libya and Azerbaijan reaches about 50 thousand, which means that their monthly cost exceeds $ 100 million, excluding arming, services and logistical needs.

There is a deep relationship between Qatar and Turkey since the arrival Justice and Development Party To power in 2002, the system of rule of the two countries was from that date a central part of the global system of the Brotherhood. But the security, military and financial partnership between them actually began since the beginning of the Arab revolutions, and the two parties’ desire to impose the agendas of militant groups in these countries.

This event coincided with two fundamental changes since that time. On one side, the Gulf countries have stepped up their rhetoric towards Diameter The Gulf group considers it an attack on Arab Gulf security, which led Qatar to believe that the Turkish military coverage might protect it from Arab political pressures. The other issue was a performance slump Turkish economyConsequently, popular resentment against President Erdoan escalated, who sought Qatari money to cover his poor economic performance.

Direct numbers say that there are more than 500 Turkish companies operating in Qatar, and that they have special concessions granted by the Qatari government, especially in the fields of contracting, whose financial volumes in the Qatari market reach $ 18.5 billion. Well the size Turkish exports It is growing annually by 10% since 2015.

But the most important of those details relates to the Qatari financial coverage of the value Turkish Lira Which has been deteriorating without stopping for 5 years until now, and has reached its lowest price in its history on the ninth of October 2020, when one dollar was equal to 7.94 Turkish lira. The figures announced by Qatar in the summer of 2018, said that the coverage amounted to 15 billion dollars, and one year earlier, the Turkish government claimed that Qatar had provided 600 million dollars to Turkey through the sovereign wealth fund. The other issue is related to financing tens of thousands of fighters / mercenaries in various countries, their salaries, needs, armaments, and their living costs.

Observers who follow the overlapping security and economic relations point out that the intertwined and complex networks of the business world between the two parties could be a cover for the informal and unannounced funding that Qatar provides to armed groups linked to Turkey. The statements made by the head of the Turkish Independent Business and Industrialists Association, Abd al-Rahman Akan, in which he said that his country controls nearly two-thirds of Qatar’s imports (3 billion out of 5 billion), are not realistic, because the size of the Qatari needs of Turkish market Much smaller, which may mean that part of that money is going to cover other things.

There are countless examples of Qatari financial participation in the activities of the “Turkish militias”, as Rajab Solio wrote, in a lengthy article in Middleeasteye, stressing that the Libyan model is the most clear example of this: “The establishment of a tripartite coordination center in MisurataBetween Turkey and Qatar andGovernment of National Accord He indicates that Qatar will now formally assist the Tripoli government to bolster its defenses against its rival in Benghazi، Libyan National Army, Despite rumors about Qatar funding several Turkish efforts abroad – including the publication of Syrian mercenaries Turkey trained in the country – Doha has always taken a back seat. “

However, this financial / security partnership and Qatar’s acceptance of the role of the financier alone would not have happened had it not been for the ideological convergence between the two parties, as the US FDD indicated in an extensive report published by Ikan Admir: “Turkey and Qatar are brothers. Fully in arms, both countries share an affinity for political Islam that shapes their regional engagement, underpinned by shared ideological commitments. Turkish-Qatari cooperation To a variety of sectors, including defense, banking, media and energy, and is likely to increase as their partnership deepens. “

But the writer returns to warn about this partnership and the sharing of roles between the two parties: “The Turkish-Qatari axis represents a challenge to the United States and its partners, because Ankara AndDoha Not only are they pursuing legitimate forms of cooperation, they are also pursuing joint ventures in illicit financing, support for militant militants abroad, promoting extremist ideologies, and harboring Terrorists Associated with them, as Hamas andAl-Qaeda“.

This is happening in unexpected places in the world, as Ali Rajab wrote a lengthy article in The Reference, in which he expressed the ability of this partnership to overthrow all regional and marginal regions, even: “Washington’s policy in the Horn of Africa has not led to the elimination of terrorist groups. Because of Turkey and Qatar’s support for extremist organizations, former leaders of the Youth movement The presidency of the Somali National Intelligence and Security Service, while the director of the agency, Fahd Yassin, is known as the Qatari man in Mogadishu along with his deputy. Thus, the terrorists were able to infiltrate the National Security Agency and the national security services in general in Somalia and the entire Horn of Africa.

These were the details of the news Qatari financial coverage of Turkey’s militias for this day. We hope that we have succeeded by giving you the full details and information. To follow all our news, you can subscribe to the alerts system or to one of our different systems to provide you with all that is new.