The United Arab Emirates sets a record in the face of... 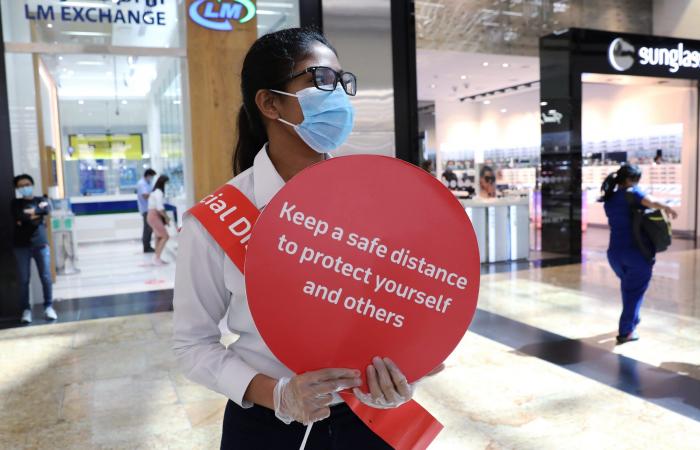 The Israeli and Emirati foreign ministers met for the first time, Tuesday, in the German capital Berlin, which constitutes a major step on the road to their new relations, especially when they visited the symbolic Nazi Holocaust monument.

Israeli Foreign Minister Gabi Ashkenazi and his Emirati counterpart, Sheikh Abdullah bin Zayed Al Nahyan, exchanged greetings by touching the elbow, as part of measures to limit the outbreak of the new Corona virus, during their first meeting after their two countries signed an agreement to normalize relations with US mediation in mid-September.

The two ministers, accompanied by their host, German Foreign Minister Heiko Maas, toured the site of the vast monument, which includes more than 2,700 concrete blocks spread over an area equivalent to three football fields. The monument honors the memory of the killing of 6 million Jews at the hands of the Nazi regime of Adolf Hitler.

Ashkenazi said the visit was particularly moving for him “as a representative (of Israel) and as a former general and son of a Holocaust survivor … The three of us stood silently together as we remembered the victims.

Bahrain and the UAE signed a peace agreement with Israel decades after Egypt signed in 1979 and Jordan in 1994.

Sheikh Abdullah and Ashkenazi exchanged a few words while visiting the Underground Monument Museum and signing the visitors’ book.

“This will never be repeated,” Sheikh Abdullah wrote, adding that “the site expresses the values ​​of coexistence and forgiveness … on which my country was built.”

Ashkenazi looked at his message to the future, saying that the meeting “symbolizes the beginning of a new era and a covenant of peace between peoples.”

“Our joint signature in the memorial book is a cry and a common cry: to remember and not forget, to be strong and to promise not to be repeated.”

Maas said it was “a great honor for the Israeli and Emirati foreign ministers to choose Berlin as the venue for their historic first meeting.”

“The most important characteristic of diplomacy is confidence, and I personally thank my colleague for having placed this trust in Germany,” he added.

After their talks at the German Foreign Ministry, the foreign ministers of the UAE and Israel expressed their readiness to begin cooperation in areas including technological development and security.

Ashkenazi said issues including establishing embassies or establishing air links were raised during the talks.

Maas described the Israeli-Emirati agreement as “the first good news in the Middle East for a long time.”

But he urged the parties to move forward and for the region to seize this momentum to establish a lasting peace between Israel and the Palestinians.

“We must seize this opportunity,” said Maas, whose country currently holds the presidency of the European Union, expressing the Union’s readiness to help.

Ashkenazi called on the Palestinians to return to the negotiating table. “The longer the negotiations are postponed, the longer we leave behind us a more difficult reality for future generations,” he said.

These were the details of the news The United Arab Emirates sets a record in the face of... for this day. We hope that we have succeeded by giving you the full details and information. To follow all our news, you can subscribe to the alerts system or to one of our different systems to provide you with all that is new.