“TAQA” and “Emirates Electricity” announce the issuance of the first green... 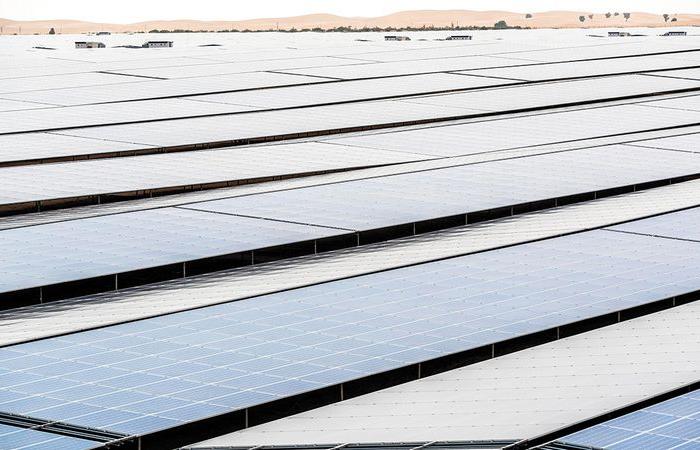 The Abu Dhabi National Energy Company “TAQA” and the Emirates Water and Electricity Company announced the successful pricing of green bonds with a total value of 700 million dollars (2.6 billion dirhams) issued by the Sweihan Photovoltaic Company.

These bonds, TAQA’s first attempt in the field of green financing, aim to refinance the existing debt facilities of Sweihan Photovoltaic Energy, the company launched to construct, own and operate the Noor Abu Dhabi plant, the largest single-site solar power plant in the world. .

These bonds were issued at a coupon rate of 3.265%, and it matures in July 2049, while it is expected to receive a credit rating of (BBB+) and (Baa1) from “Standard & Poor’s” and “Moody’s” respectively, at a time when it witnessed an oversubscription of 1.8 times to local investors. And regional and international applicants who submitted subscription applications totaling $1.26 million.

After Sweihan PV offered its green bond framework, the bond was approved under International Capital Markets Association standards, ensuring that the project meets the requirements of the Green Bond Principles. Proceeds from these bonds will be used exclusively to refinance loans arranged in 2017 for the construction, operation and maintenance of the Noor Abu Dhabi plant.

He added, “These bonds have attracted the interest of international investors and investors interested in corporate and environmental and social governance, which enhances confidence in TAQA and its track record of accomplishments.”

For his part, Othman Al Ali, CEO of Emirates Water and Electricity Company, said that the issuance of green bonds for the Noor Abu Dhabi plant is a pioneering initiative that confirms our commitment to implementing innovative and sustainable solutions in energy production and water desalination.

He continued: “(Noor Abu Dhabi) is one of the main pillars for the development of the solar energy sector in the Emirate of Abu Dhabi, and the first project among many world-leading projects in the UAE, which drives change in the energy sector and contributes to reducing the carbon footprint.” Reaching investors’ markets through the issuance of these green bonds is a major step in financing this change and supporting the sustainability goals in the UAE.

In the same context, the CEO of Sweihan Photovoltaic Energy Company, Abdullah Salem Al Kiyumi, said that the “Noor Abu Dhabi” plant contributed to setting benchmarks for the UAE’s ambitions to build a green economy. He added: “The first issuance of long-term green bonds in Abu Dhabi to refinance the project demonstrates our ability to provide renewable energy competitively and reliably, and is a testament to our commitment to achieving economic growth and sustainable development in the Emirate of Abu Dhabi.”

In addition to the Noor Abu Dhabi plant, TAQA is continuing the construction work of the Al Dhafra solar photovoltaic plant, which, upon completion, will surpass the Noor Abu Dhabi plant, becoming the largest solar power plant in one location in the world. This project set records in terms of the lowest competitive tariff for solar energy at a cost of 1.32 US cents/kWh (4.85 Emirati fils/kWh) when the financing deal was completed. The plant is approximately twice the size of the Noor Abu Dhabi plant, and will provide clean energy to more than 160,000 households using more than four million dual-sided solar panels.

Noor Abu Dhabi is currently the largest solar power plant in one location in the world. It has recently completed three years of successful commercial operations, with a production capacity of 1.2 gigawatts, and provides clean solar energy to more than 90,000 families in the Emirate of Abu Dhabi. While contributing to reducing carbon dioxide emissions by one million metric tons annually. TAQA owns 60% of Noor Abu Dhabi, while Marubeni and Gencosol own the remaining 40%.

These were the details of the news “TAQA” and “Emirates Electricity” announce the issuance of the first green... for this day. We hope that we have succeeded by giving you the full details and information. To follow all our news, you can subscribe to the alerts system or to one of our different systems to provide you with all that is new.