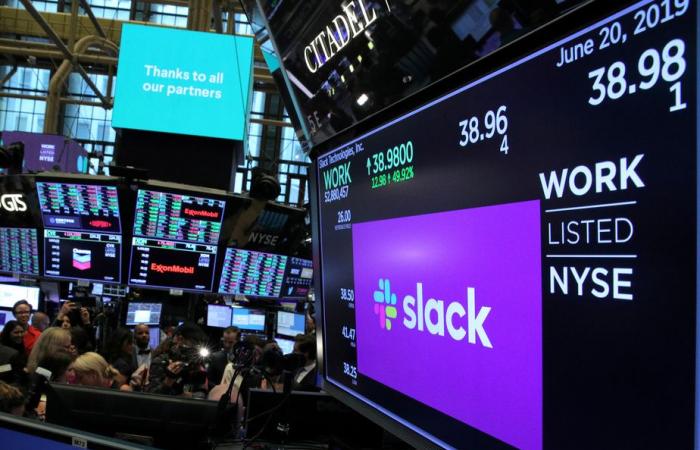 (San Francisco) Salesforce, the customer relationship technology specialist, bought Slack for nearly $ 28 billion, an acquisition that puts it in a better position to compete with Microsoft, but will undoubtedly not exempt it from further investments if he wants to overshadow the IT giant.

This is the largest buyout in the history of the group founded in 1999. The transaction, in cash and shares, values ​​corporate messaging at $ 27.7 billion, according to a statement released Tuesday.

“We’re made for each other,” said Marc Benioff, CEO and Founder of Salesforce. “Together, we will shape the future of business software and transform the way we work in the all-digital world.”

Marc Benioff has made his company a benchmark in management software for businesses, and also a landmark of San Francisco, the Salesforce Tower being the tallest skyscraper in the city at the gateway to Silicon Valley.

The businessman, who bought the famous American magazine Time in 2018, is also known for his vision – which has become commonplace – of the platform as a subscription service.

“I’ve watched Slack grow for six years. To be honest, they remind me of another great company: Salesforce! “, He told during a conference to analysts Tuesday. “I can see them through the window, they’re right next door, we say hi with Stewart” Butterfield, Slack’s boss.

Slack offers a platform with tools to collaborate online on projects with colleagues. The company listed since June 2019 has benefited from the boom in teleworking.

Salesforce plans to integrate Slack technology into its own software, which is used by sales and marketing teams at many large companies around the world.

This buyout is above all the way to stay in the race against Microsoft, which dominates with Amazon the global cloud (remote computing) and whose digital services for companies (the Azure cloud, Office 365 tools and Teams messaging ) are also on the rise thanks to the pandemic.

“Despite tough competition from Microsoft, Slack is clearly a success,” noted analyst Dan Ives of Wedbush. “If Salesforce wants to expand beyond its gold mine of corporate sales and marketing departments, it’s now or never. This is a real wake-up call for Microsoft ”.

Salesforce largely dominates the customer relationship management software market. But Microsoft has beaten the pawn by buying the professional network LinkedIn and sharing the office sector with Google (Outlook versus Gmail, for example).

The group has experienced strong growth in recent years, recently reinforced by health measures and confinements, which have accelerated the digital transition of companies. Salesforce, which is worth nearly $ 220 billion, overtook IBM in market capitalization in late 2018, and Oracle in June.

He has just achieved a “record” quarter, according to his emphatic boss, with 5.4 billion in turnover from August to October (+ 20% over one year), for 1.1 billion in net profit. “No other software company is growing at this speed,” Marc Benioff repeated.

And it’s not over, according to analyst Patrick Moorhead. “Salesforce is now looking to compete with Microsoft on new ground, that of online collaboration. It’s not going to be easy and it might require additional investments in video and individual productivity ”.

“I don’t think Microsoft customers are going to abandon Teams and replace it with Slack. Or they would have done it when Micorsoft was more vulnerable, ”he added.

In July, Slack filed an unfair competition complaint with the European Commission against Microsoft, accusing it of forcing the hands of users of its Office tools by forcing them to use Teams messaging.

“With COVID-19, the market has taken Teams to record levels while Slack has suffered from its lack of videoconferencing,” retorted a spokesperson for the group in Seattle.

Slack saw its revenue grow 49% year on year for the months of May, June and July to $ 216 million, and significantly reduced its losses to just $ 68 million.

These were the details of the news IT giant Salesforce buys Slack for $ 27.7 billion for this day. We hope that we have succeeded by giving you the full details and information. To follow all our news, you can subscribe to the alerts system or to one of our different systems to provide you with all that is new.