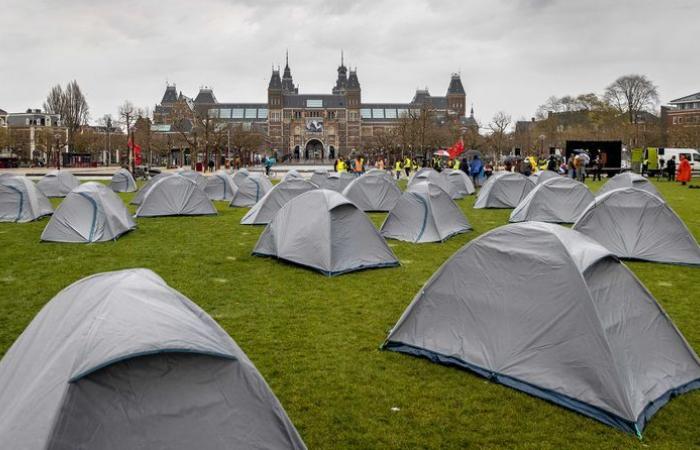 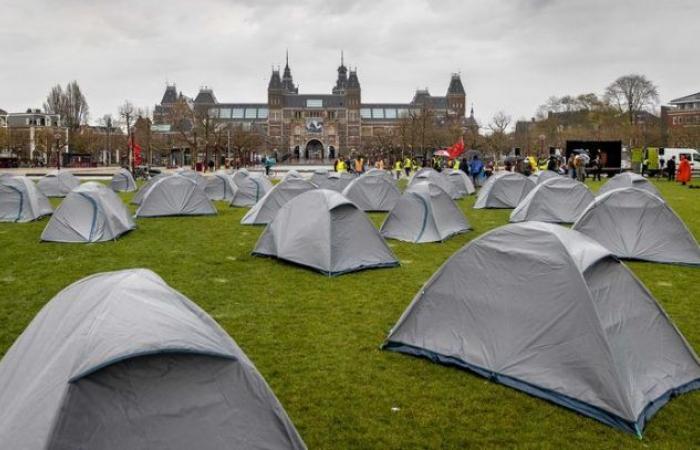 The activists want to call on the government to adjust Dutch and European asylum and migration policies, for example by allowing more refugees to enter EU countries.

Despite the rain, a symbolic tent camp has been set up on the lawn, consisting of about thirty small gray tents. A dozen people are also on the move in Utrecht and Groningen.

The protest action lasts no less than 24 hours, until Monday afternoon at 1:00 PM. “A tent camp with which we reflect on the terrible situation in which the refugees in Greece and in many other places in Europe are trapped. We say no to the ‘new’ European migration pact ”, say organizations behind the protests, including #SOSMoria.

There are also demonstrations in Haarlem and Harlingen, as in the rest of Europe. Various speakers will also perform at the Grote Markt in Groningen and the Neude in Utrecht.

The activists will wear face masks and say to keep 1.5 meters away at all times. They also urge people not to come in large groups. The demonstration in Amsterdam will be broadcast via a live stream. The tents used by the protesters during the action will be donated afterwards as part of emergency aid to refugees in Calais, France. According to the organizations, there is a great need for tents there, because refugee people often sleep on the street there.

In the new migration and asylum pact, the European Commission stipulated that EU countries are not obliged to accept asylum seekers from other countries. The organizations behind the tent demonstrations, such as #SOSMoria, think that the pact is too focused on the return of asylum seekers and strengthened border security. That would not offer a solution “to the humanitarian crisis and it would encourage the emergence of more camps such as Moria.”

The Moria refugee camp on the Greek island of Lesbos burned down almost two months ago, leaving some 12,000 people homeless. A large part of them are now staying in a new camp, which according to the organizations is ‘even worse than the old camp’.

These were the details of the news Symbolic tent camp on Museumplein for adjustment of migration policy for this day. We hope that we have succeeded by giving you the full details and information. To follow all our news, you can subscribe to the alerts system or to one of our different systems to provide you with all that is new.