With 4 billion dirhams … the stock market opens its weekly... 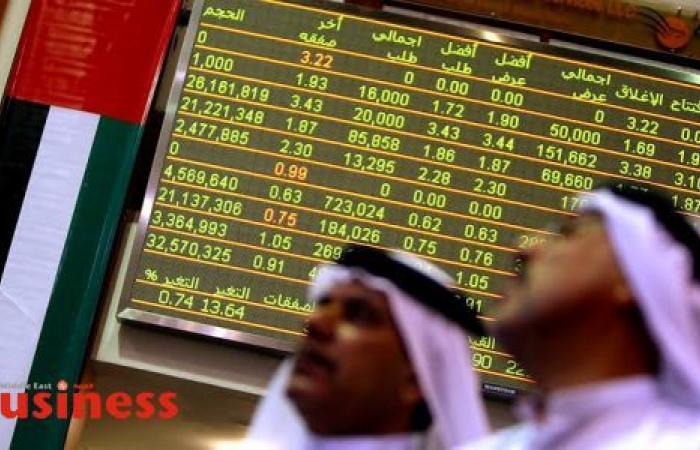 Positivity dominated the local money market transactions at the beginning of the first day of the week in the Abu Dhabi and Dubai financial markets, and the market value of the traded companies’ shares won about 4 billion dirhams at the end of the session.

The Dubai Financial Market had started its dealings at a limited height during the first half of the session, but the rise in the pace of some real estate and banking stocks contributed to the increase in the rate of improvement after that.

With the increase in the pace of improvement, the general index of the Dubai Financial Market closed at the level of 2,181 points, an increase of approximately 1%, which paves the way for overcoming a new barrier in the coming days according to the data of technical analysis .. As for the Abu Dhabi Securities Exchange, the index closed at 4706 points with a slight decrease that did not exceed its percentage. 0.25%.

The share of Emaar Properties, which rose to 2.66 dirhams, was at the forefront of the shares that led the activity in the market in active trading, whose value exceeded 44 million dirhams. Emaar Development’s share rose to 2.30 dirhams, and Union Properties rose to 26 fils.

Dubai Islamic Bank shares achieved good gains at the beginning of the week, reaching the level of 4.11 dirhams, in addition to Tabreed, the closed share at 2.65 dirhams.

In the capital market, Aldar’s shares continued to rise to 2.67 dirhams, along with Abu Dhabi Commercial Bank, which closed at 5.85 dirhams, and Abu Dhabi Energy, at 1.67 dirhams.

On the level of liquidity, the value of the concluded deals reached approximately 420 million dirhams, while the number of traded shares reached 174 million shares, executed through 4,028 transactions.

These were the details of the news With 4 billion dirhams … the stock market opens its weekly... for this day. We hope that we have succeeded by giving you the full details and information. To follow all our news, you can subscribe to the alerts system or to one of our different systems to provide you with all that is new.