A new collapse of the Yemeni riyal after the failure of... 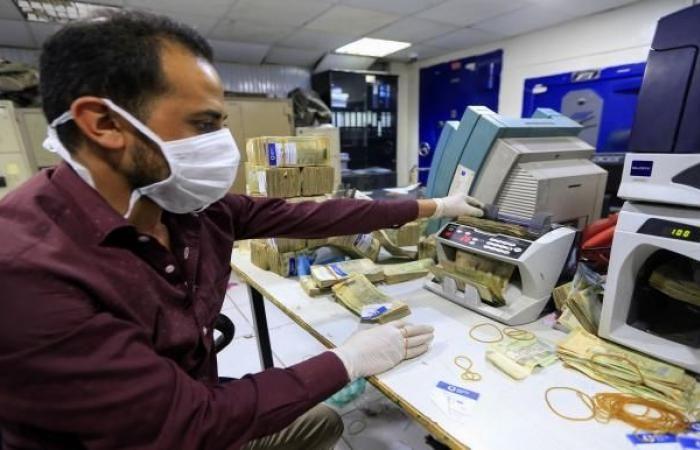 The limited treatments undertaken by the Central Bank of Yemen failed to curb the deterioration of the local currency against foreign currencies, as the riyal resumed its decline after days of relative recovery, amid fears of a greater decline during the coming weeks of this year.
Since the beginning of this year, the Yemeni riyal has lost 26 percent of its value, especially in the governorates under the internationally recognized government, in the south of the country, which has exacerbated the troubled economic situation, the rise in commodity prices, and the increase in the number of people totally dependent on food aid and relief materials provided by international organizations .
Bankers told Al-Araby Al-Jadeed that the exchange rates, today, Saturday, recorded 845 riyals against one dollar in the governorates of Aden and Taiz, after it had witnessed a relatively improvement at the end of last September by recording 770 riyals against one dollar.
In the capital, Sanaa, which is experiencing a severe liquidity crisis, exchange rates are still fixed at 610 riyals against one dollar, due to the halt of importing oil derivatives from the Hodeidah port, which is controlled by the Houthis, as the fuel trade acquires more than 70 percent of foreign currencies on the black market.

The United Nations Office for the Coordination of Humanitarian Affairs expressed its fear of a greater collapse in the coming period, and said in a recent report, a copy of which was received by Al-Arabi Al-Jadeed, that the level of risk of another depreciation of the Yemeni riyal in the coming months is high, as a result of the inability to predict the sources of foreign currency. And foreign currency reserve levels.
The record price collapse of the Yemeni currency, as well as the fuel crisis that has suffocated the Houthis for months, led to an increase in the prices of imported and locally produced food commodities, as well as agricultural products.
A source in the Ministry of Industry in the legitimate government confirmed to Al-Arabi Al-Jadeed that commodity prices rose during the past weeks from September and October to 40 and 80 percent than they were 3 months ago, while vegetables were witnessing a 100 percent increase.
The new collapse comes days after the Central Bank of Yemen announced in Aden a package of treatments for exchange rates, on top of which is forcing importers of oil derivatives to exchange only through the bank at a preferential price in order to curb the speculation process on the black market. The Central Bank has also stopped unauthorized internal money transfer networks and started establishing a unified transfer network that is subject to its full control, and it has also prevented the transfer of foreign currency from the recognized government areas to the Houthi areas.

These were the details of the news A new collapse of the Yemeni riyal after the failure of... for this day. We hope that we have succeeded by giving you the full details and information. To follow all our news, you can subscribe to the alerts system or to one of our different systems to provide you with all that is new.