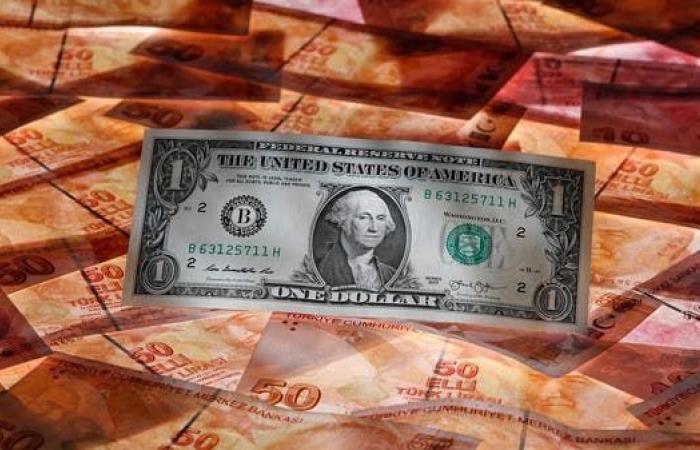 The Turkish lira recorded its worst weekly performance in nearly 21 years last week, erasing all the slight gains it had achieved, amidst a state of panic investors swept over about the Turkish central fixing interest rates despite the economic difficulties the country is going through in the midst of the Corona pandemic and geopolitical tensions that weigh on the economy. Turkish.

The drop recorded last week is the ninth weekly decline in the Turkish currency, which has approached an important psychological barrier at levels of 8 liras per dollar, confirming market fears that the Turkish central bank’s move will not live up to the difficulties facing the economy, which is about 700 billion dollars, according to what you mentioned. Bloomberg Agency.

After an unexpected interest rate hike at last September’s meeting, expectations were for a shift in the bank’s monetary policies to pull the economy out of its stumbling block, which did not happen as the bank unexpectedly kept interest rates at last Thursday’s meeting, causing a new wave of asset sale. Denominated in Turkish Lira.

“The bank is not yet intent on having … Years of policy mistakes have caused large losses in reserves and put pressure on the currency … the decision the bank has also made demonstrates that the authorities are unwilling to cut,” a fixed income analyst at Aberdeen Asset Management in London told the agency. Credit rates, which is necessary to restore balance to the market again. ”

A research note issued by Barclays said that the Turkish central bank should have continued the policy of raising interest as the only option to stop the currency bleeding, which may not remain sufficient to support the lira, but it is a step that must be taken immediately.

On October 22, the Turkish Central Bank confirmed interest rates after raising them at the last meeting by about 150 basis points to levels of 11.5%, a step that failed to pull the pound out of the sharp decline against the dollar as it approached recording levels of 8 lira per dollar, a record level that has not been recorded. From before.

The wave of decline in the lira reminds us of what happened in the year 1999, which is one of the worst years for the Turkish economy ever, when the government was dissolved and early elections were called, in addition to two earthquakes that killed thousands of Turks, which led in total to the severe economic crisis that has occurred. The economy passed by in the year 2001.

The low interest rates caused foreign investors’ reluctance to leave Turkish assets and put more pressure on the Turkish currency at a time when the country faces the risk of ending US sanctions against it due to its political positions and conflicts in the Eastern Mediterranean, matters that have caused the depletion of foreign reserves by the Central Bank to defend the lean currency. .

Foreign investors sold Turkish assets in the stock and bond markets by about $ 13.5 billion this year, which is the worst wave of foreigners ’exodus from Turkish investment tools since at least 2005, while there are no signs of a halt on the horizon.

These were the details of the news The worst week for the Turkish currency since 1999 … what... for this day. We hope that we have succeeded by giving you the full details and information. To follow all our news, you can subscribe to the alerts system or to one of our different systems to provide you with all that is new.