Global “gold” prices between the dollar’s flames and the hope of... 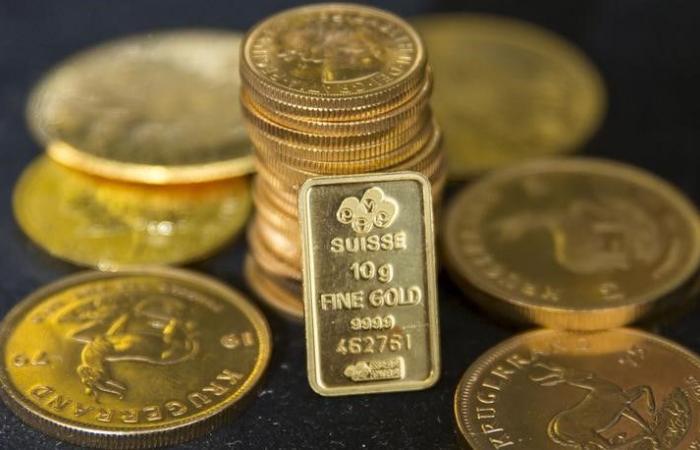 As is the norm between them, they do not meet in the same direction, the dollar rose and gold fell, as there is no kiss for investor money to those that provide the highest gains.

It rose against a basket of major currencies during trading today, Tuesday, amid anticipation of the US stimulus package data, and waiting for inflation data in the United States.

During the same period, the benchmark that measures the currency’s performance against the 6 major currencies rose 0.12% to 93.18.

On the other hand, the yellow metal retreated to 1926 dollars an ounce, losing $ 2.7 after earlier losses exceeding 4 dollars.

Compared to the GDP, the budget deficit is 15.2%, the highest level since 1945. In addition, 2020 is the fifth year in a row of increasing budget deficits.

In the environment of increasing public debt, the dollar finds itself under downward pressure, which supports gold prices in return. As public debt increases, the Democrats prefer smaller stimulus packages. But pressure is now mounting to pass the stimulus package, and economists believe that without the stimulus package, the pace of the economic recovery will slow. And this vision agrees with the Chairman of the Federal Reserve, Jerome Powell, who stressed last week that the financial package must be approved.

Also, the economic data is not as strongly encouraging as it was at the beginning of the recovery path. The unemployment rate is now lower, but last month failed to reach Wall Street expectations, while jobless claims remain high. Most importantly, the indications do not demonstrate a smooth and speedy recovery.

What does this mean for gold?

Markets were optimistic about adopting the stimulus package, after the White House proposal to provide $ 1.8 trillion, but on Saturday, the Republican and Democratic parties announced their rejection of that package.

However, the package is very important, because it increases the public debt, and at the same time it will pay the Federal Reserve to employ government debt funds, which increases the bank’s general budget, and all this is in the interest of.

However, be aware that there are factors that stand in the way of gold, such as the European Central Bank’s concerns about the state of the European economy more than before. Despite the welcome of the new influx of liquidity, the central bank may adopt some measures that weaken the euro and gold against the dollar.

There is a risk in distributing the Coronavirus vaccine, and its ability to increase the risk appetite of investors, and reduce the demand for gold.

In the black gold “oil” market, which suffered both during the past months, investors await OPEC’s expectations regarding supply and demand developments.

And after sharp losses yesterday’s session after the reduction of the risks of the severity of Hurricane Delta and the strike by the workers of oil companies.

And the International Energy Agency had previously expected a decline in global energy demand by about 5% this year.

The agency said that the new Corona Covid 19 virus will shape the future of energy.

The benchmark crude futures price for December delivery increased 0.8% to $ 42.06 a barrel.

These were the details of the news Global “gold” prices between the dollar’s flames and the hope of... for this day. We hope that we have succeeded by giving you the full details and information. To follow all our news, you can subscribe to the alerts system or to one of our different systems to provide you with all that is new.