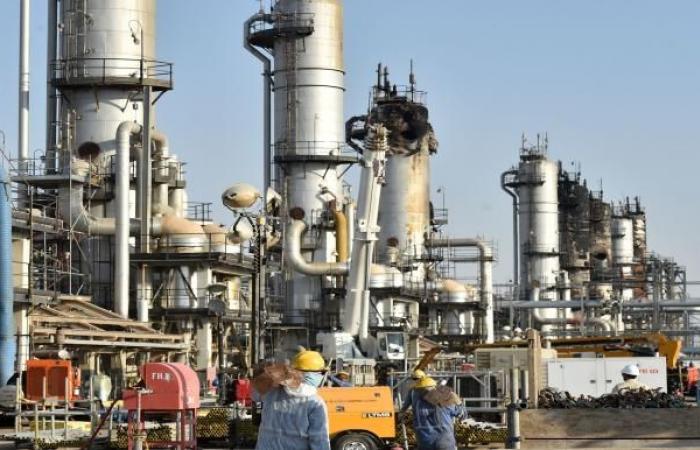 The slump in demand for crude oil during the coronavirus pandemic has prompted oil companies to consider the possibility that the fossil fuel market may have peaked and that the time has come for a new global energy shift.
However, oil industry sources and analysts told Reuters that Saudi Aramco intends to increase its production capacity so that it can pump as much as possible from the kingdom’s huge reserves when demand recovers before oil loses its value by shifting to clean sources of energy.
The sources said that Aramco believes that it can reduce prices from its competitors and continue to profit even when prices are low, depriving competitors of profit, because the Kingdom owns about 20 percent of global proven reserves, and production costs amount to only four dollars per barrel.

Officials and sources said that Riyadh is now planning to implement what appeared to be a threat in March during the oil price war with Russia to increase production capacity from 12 million barrels per day to 13 million.
Aramco’s approach stands in stark contrast to its Western competitors such as BP and Shell, which intend to restrict spending on oil production so that they can invest in renewable energy and clean energy in preparation for a world that lives with low carbon emissions.
The sources added that the state-run oil giant is amending, with this new focus on oil, ambitious expansion plans in upstream activities (refining and marketing) and is now aiming to seize assets in existing projects in major markets such as India and China instead of building giant, expensive factories from the start. .
“We expect oil demand to continue to grow in the long term, driven by population increases and economic growth. Fuels and petrochemicals will support demand growth … Predicting an imminent peak in oil demand is simply inconsistent with the reality of oil consumption,” Aramco said in a statement.

Take the money
Sources familiar with the policy-making process in the Kingdom say that the possibility that crude oil has reached its peak makes Saudi Arabia, the largest oil exporter in the world, to exploit its reserves from it more urgent, as long as it can generate the necessary money to finance Saudi economic reforms.
Saudi Crown Prince Mohammed bin Salman is trying to create new industries to reduce the kingdom’s dependence on oil, through the Kingdom’s ambitious 2030 vision to diversify economic resources, but bin Salman needs, for the plan to succeed, to great financial liquidity, and Aramco’s oil sales are the main source of revenue in front of him.
One of the sources said, “The crown prince said that he will work on diversification, but he did not say that he will eliminate the oil industry. As long as it is possible to achieve more income from it, why not?
He added, “Let us agree that, in light of the global economic situation, full diversification will not be achieved by 2030. Giving a gigantic economy like Saudi Arabia completely free of dependence on oil requires at least another 50 years. So as long as oil is with us, we will extract more money from it if this is possible.” .

Low cost
Sources familiar with the kingdom’s thinking in the field of oil said that Aramco’s plan to increase production capacity to 13 million barrels per day is central to its strategy, as it wants to be ready to seize a greater share of the market when demand recovers.
Sources and analysts say that Saudi Arabia also needs to prepare for the expected ambiguity surrounding oil prices after the Covid-19 epidemic to ensure the continuation of spending and economic reforms plans without being greatly affected by the oil price at 40 or 60 dollars a barrel.
The prevailing thinking in Saudi Arabia is that as long as oil prices are expected to remain low and may hover around 50 to 60 dollars a barrel for years, oil prices are supposed to be supported by the closure of fields in regions, such as the United States, where the cost of oil production is high.
The sources said that passing through peak oil demand may also lead to a new price war and an end to the efforts of the Organization of the Petroleum Exporting Countries (OPEC) and its allies to limit supplies, so Riyadh wants to arm and prepare for battle.
All oil producers will face a similar need to monetize their reserves and energy investments before they lose value. Unlike Saudi Arabia, the economy of OPEC members such as Venezuela, Iraq and Iran will be heavily dependent on oil and gas.

Downstream sector review
Another key aspect of Aramco’s strategy is a review of the new administrative organization for institutional development that the company established last August of the company’s costly plans to acquire assets in the downstream sector, i.e., refining and distribution.

Aramco had made big bets on petrochemicals and oil refining as a way to mitigate the impact of a slowdown in oil demand growth.
However, the sources said that in an industry that may be on the cusp of a long-term recession, Aramco is now looking to buy assets that investors want to dispose of rather than setting up projects from scratch.
The sources said that Aramco, for example, has postponed plans to build a refining and petrochemical complex with an investment of 10 billion dollars with the Chinese giant Norinco for defense industries in China.

The sources added that the Saudi company is interested in investing in another project in China, where it will buy a stake in the Zhejiang refinery and petrochemical complex south of Shanghai and get its hands on an oil storage facility.
Officials at Zhejiang Petroleum and Petrochemical Corporation were not immediately available for comment.
Aramco is also keen to invest in India and is in talks with the Indian company Reliance Industries to buy a 20 percent stake in its oil and chemical activity, but negotiations dragged on over the price of the deal.

These were the details of the news Egypt News | Latest News / Aramco is violating market... for this day. We hope that we have succeeded by giving you the full details and information. To follow all our news, you can subscribe to the alerts system or to one of our different systems to provide you with all that is new.