Worst outbreak of locust in Kenya is far from over 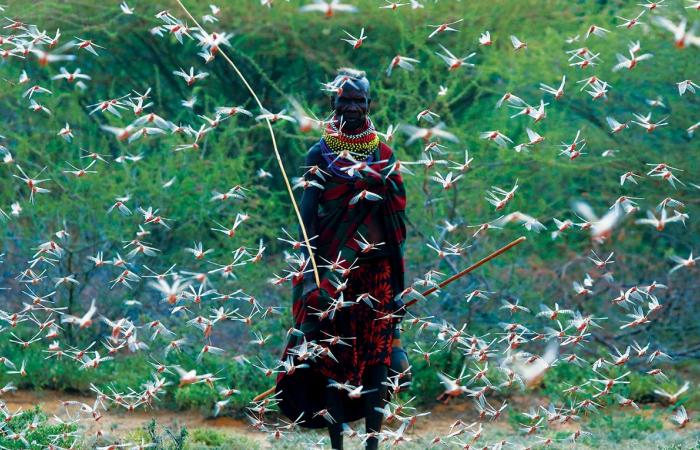 Maaz Sheikh has had a good lockdown.

The founder and CEO of Starzplay, the Middle East’s leading entertainment streaming channel, saw his business soar as curfews, social distancing and travel restrictions left people with little to do apart from slump in front of a TV and binge watch for hours on end.

“I think when the whole situation was unfolding, we were trying to think which way is up and which was down, both on a personal level and also as a company — what it means for our subscribers. It was nerve-wracking in the beginning,” Maaz Sheikh told Arab News.

In the region, it was Starzplay subscribers chose to watch, rather than Netflix or other streaming services, in English and in Arabic.

“What we benefited from, of course, was all the people staying home, but one of the things that worked in our favor was that we are an organization based and headquartered here, and we were able to adapt and localize our services much faster than anyone else,” he said.

“In Saudi Arabia, you can sign up for Starzplay via STC, Mobily or any of the other services. You can sign up with your mobile phone number. Netflix came to this region with a very US-centric mindset, thinking that everyone had a credit card and that having a credit card is a norm in the world. In fact, the reality is different, especially in Saudi. Not everyone has a credit card,” he added.

“So, through one bill where you pay your landline and your broadband, you can also have access to Starzplay on the same bill. You can just download onto your smart TV,” he added.

Starzplay has been in business for five years, and while it is probably not as well known as Netflix, it has been making big inroads into the region, especially Saudi Arabia.

The Kingdom accounts for 40 percent of total revenue, while almost half of all consumption in the Middle East and North Africa region comes from Saudi viewers.

And what have they been watching during the long weeks of lockdown?

Saudis on average watched more than 18 hours of Starzplay in May, compared with less than 12 a year before.

“The beauty is that everyone has a mobile phone. We were there in the market with the right product, the right content, but also the right distribution so the masses can actually sign up for our service. It really benefited us.

“It was not just that we were a streaming service. The whole category benefited from the lockdown, but we were the only one in the market that had this kind of distribution and payment arrangements. We were the only one available to the masses,” Sheikh said.

It is not just the distribution platform that is different from Netflix. Starzplay takes a distinct stance on content, too, as Sheikh explained.

“Our industry is evolving in a simple and predictable way. What is happening is that the more Netflix has gone into its own originals, the more studios see them as a competitor. So studios have been pulling their content away from Netflix.

“Until now, with what comes out of Hollywood and the UK, 95 percent of English-language content was produced by seven or eight studios. In the UK it’s the likes of the BBC and ITV, while in the US it’s Warner, Disney, Sony, Showtime, CBS, all the major studios,” he said.

“So, the way the industry is evolving is that if you want Netflix originals, you go to Netflix, if you want anything else you go to Starzplay,” he said.

Sheikh reeled off an impressive list of top shows on his platform. “Big Bang Theory,” “Billions,” “Grey’s Anatomy” and “Britannia” are among them, while younger viewers soak up “The Flash,” “Supergirl” and other DC titles made by Warner Studios.

Starzplay has also made its first foray into original content, tailored for a Middle East audience, with the series “Baghdad Central.”

“Data is the new oil, they say, and ‘Baghdad Central’ was the result of our experience over five years of consumption history, with billions and billions of minutes consumed. So based on what people were consuming in our key markets and with those insights, we produced our first original,” Sheikh said.

“Baghdad Central” was launched in March with a big name Hollywood actor — Corey Stoll from the award-winning series “House of Cards” — as well as top British and Arab actors.

“We wanted to bring a show to the region that combined the best of the three. It was shot in Morocco in partnership with UK and US producers,” he explained.

That kind of content has pulled in the viewers during lockdown. The figures show Starzplay hit a peak of 6.5 million daily minutes of consumption in Saudi Arabia in the middle of April, compared with about 2 million before the pandemic lockdowns.

Existing viewers are also watching more. The average Saudi spent 28 minutes daily in front of a Starzplay show before the lockdown. That more than doubled to one hour as movement outside the home was restricted.

He is reluctant to forecast how many of these consumers will stay with Starzplay as the lockdowns are eased around the world and the region.

“I’m expecting some churn, so it’s tough to predict what the base will look like later in the year. We saw tremendous growth, but as the lockdown eases I think we’ll see some churn on those subscribers,” he said.

But even as the lockdown are eased significantly in the region, consumers are not going back to pre-pandemic levels. There is likely to be a permanent shift in demand for Starzplay in the “new normal” environment.

“Unlike Netflix, one of the challenges we had in the region is that the brand awareness and content awareness of our service was comparatively low. One of the things that has happened is that because of increasing demand and awareness, people got to find out about Starzplay. People experienced that and connected the content to our brand.

“That is going to be an enduring and lasting benefit for our company. You cannot unlearn it. I’m expecting some churn in high sign-ups and reduced consumption volumes, but the lasting benefit we’re hoping for is the brand awareness and content awareness that was created,” he said.

That kind of growth is likely to accelerate Starzplay’s evolution from a privately funded startup to a listed public company. It has raised $125 million over its five years, from some pretty impressive investors, including US media giant Lionsgate, the big financial firm State Street Global Advisers, and Nordic investment firm SEQ, which backed Starzplay from the beginning.

With profitability just around the corner, Sheikh does not see the need for further funding, especially as investment sources have dried up during the uncertainty of the pandemic period.

“During COVID times, when consumption and new subscribers were going through the roof, the flip side was that we realized that capital markets were going to be out for 2020. Lucky for us, we are well capitalized, and we are not in a situation where we need to use funds. This is not a good time to be out there raising money,” he said.

“The goal is to serve our customers and also create shareholder value. There are multiple ways of doing that. One is that you generate cash and shareholders benefit from cash dividends. That’s the traditional model. The more high-growth model that is more applicable to companies like us is shareholders push for more growth and expansion to increase the enterprise value of the company,” he said.

Sheikh has set his medium-term sights on a public listing. “In the long run the goal is to continue to grow the business, and in the next three to five years to get into a position where we can list the company on the London Stock Exchange.

“We haven’t absolutely decided that, as it’s so far out. I’d say what we’re looking to do is list ourselves, and if not in London, then other markets, local or London. That’s the ambition, to look to IPO on London or other markets. We’re not there yet. We’re still two to three years away from a decision, but that’s our ambition,” he said.

These were the details of the news Worst outbreak of locust in Kenya is far from over for this day. We hope that we have succeeded by giving you the full details and information. To follow all our news, you can subscribe to the alerts system or to one of our different systems to provide you with all that is new.