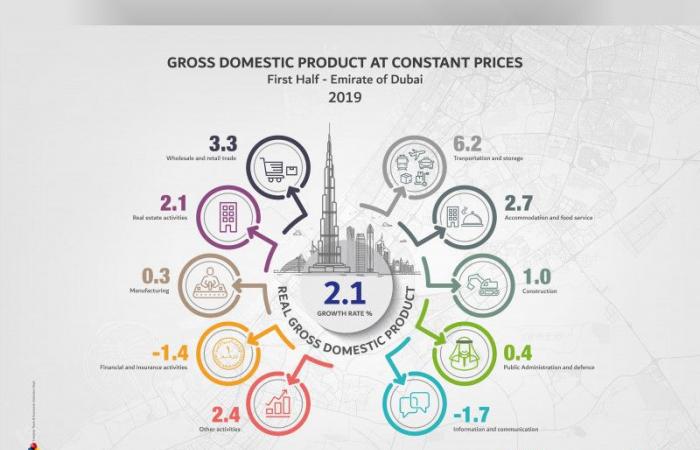 You are now following the details of the Dubai economy grows 2.1 pc in H1 2019 news and now we leave you with the details

Mohamed Nass - Dubai - Dubai's economy grew 2.1 percent YoY in H1-2019, with the emirate's GDP reaching AED208.2 bn at constant prices in the first six months of 2019, according to data published by the Dubai Statistics Centre, DSC.

Arif Al Muhairi, Executive Director of the DSC, said that the flexibility of Dubai’s economy and its business structure helped the emirate maintain its economic growth, despite the slowdown of the regional and global economy.

He also said that the wholesale and retail sector supported the overall growth of the local economy thanks to Dubai’s strong infrastructure as it helped boost its re-export business and trade with countries both in the region and around the world. Al Muhairi further said that the trade sector posted a real growth of 3.3% backed by higher external trade, and higher re-exports which grew by 3 percent to reach AED210 bn in the first half of 2019.

The wholesale and retail sector, which contributes 25.5 percent to Dubai’s GDP, grew 3.3 percent YoY, while external trade grew by 17.7 percent to AED76 bn.

The transport and storage sector grew by 6.2 percent. The sector plays a vital role in Dubai’s economy since it is highly related to all other economic sectors.

Activity in the hospitality and restaurant sector, which contributed 5.1 percent to GDP, grew 2.7 percent. Total visitors to Dubai in the first half of 2019 reached 8.4 million, a 3.2 percent growth compared to the same period in 2018, according to data from the Department of Tourism and Commerce Marketing.

Real estate activity also grew by 2.1 percent in the first half of 2019 compared to the same period in 2018 and contributed nearly 7.4 percent to the total GDP.

Meanwhile, agriculture, electricity, gas, water, waste management, information and communication activities, as well as financial and insurance activity, declined by 1.4 percent. YoY. Al Muhairi said that these sectors contributed 17 percent to the total GDP. The decline had a slight impact on overall growth.

These were the details of the news Dubai economy grows 2.1 pc in H1 2019 for this day. We hope that we have succeeded by giving you the full details and information. To follow all our news, you can subscribe to the alerts system or to one of our different systems to provide you with all that is new.