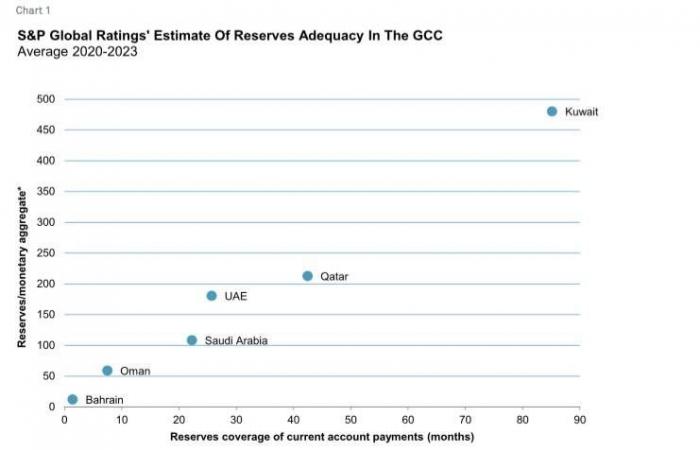 Hind Al Soulia - Riyadh - DUBAI — When oil prices fall sharply, investors often question the sustainability of exchange rate arrangements in Gulf Cooperation Council (GCC) countries. The countries' exchange rate pegs against the US dollar — or in the case of Kuwait to an undisclosed currency basket believed to be dominated by the US dollar — are longstanding and have lent the GCC monetary policy credibility over the decades.

Yes, we believe so. We view all GCC sovereigns as having sufficient access to foreign currency assets, or external financial support, to meet pressures on their exchange rates.

Rules of thumb for estimating "reserves adequacy" include reserves coverage of imports, monetary aggregates, and short-term debt. To assess the capacity of GCC sovereigns to defend their currencies and therefore for their exchange rate pegs to remain in place, we have used relatively conservative measures. We look at reserve coverage of total current account payments and the reserve coverage of broad money, M2, rather than the monetary base M0 (see chart 1).

For the purpose of this article, we define reserves as gross central bank reserves plus our estimates of government liquid external assets. We expect that GCC sovereigns would use their liquid external assets to support their economies in times of financial distress, including in defense of their currency pegs.

For example, when several Arab countries imposed a boycott on Qatar, outflows of nonresident funding from Qatari banks totaled $22 billion (14% of GDP) in 2017. However, an injection of $43 billion (27% of GDP) by the government and its related entities — mostly the Qatar Investment Authority — more than compensated for the outflows.

Two distinct groups emerge from our analysis of reserves adequacy. Kuwait shows clear strength in terms of the availability of reserves to cover the monetary base and current account payments over the next four years. Qatar, the United Arab Emirates (UAE), and Saudi Arabia also show significant strength.

In the second tier, we have Bahrain and Oman, sovereigns that have a lower level of government external liquid assets. One common assumption is that three months' coverage of imports is adequate to protect against external shocks. Of the GCC sovereigns, Bahrain has lower reserves adequacy than its peers, which we estimate at one month's coverage of current account payments in 2020-2023 (a more conservative measure than imports).

We do not view Bahrain, on its own, as having sufficient foreign currency resources to meet potential pressures on its exchange rate. However, we expect the Bahraini peg to remain in place because we continue to factor further GCC financial support to Bahrain should financial pressures mount, on the exchange rate peg, or otherwise.

Bahrain is currently benefiting from a $10 billion financial support package pledged by Kuwait, Saudi Arabia, and the UAE in October 2018. This amounts to about 5% of GDP in annual concessional lending over the four years to 2022.

Importantly, in terms of reducing pressures on GCC exchange rate pegs, we expect oil prices to recover in 2021, with Brent averaging $50 during the year, up from $30 in 2020 (see "S&P Global Ratings Cuts WTI And Brent Crude Oil Price Assumptions Amid Continued Near-Term Pressure," published March 19, 2020, on RatingsDirect).

This will provide a key support to the economies and foreign reserves positions of GCC central banks. The longer oil prices remain low, the higher the likelihood that pressure would increase on GCC exchange rate pegs. However, for most of the GCC countries, our oil price assumption for 2021 is below the IMF's respective fiscal breakeven oil price.

This suggests that fiscal pressures will not be completely alleviated in the region, particularly with regard to Bahrain and Oman (see table 1). Under the same framework, external pressures should be more muted across the GCC, with only Bahrain and Oman's IMF external breakeven oil price above our assumption of $50.

In the worst-case scenario, perhaps due to oil prices remaining lower for longer, pressures could result in a forced devaluation of the currencies of lower-rated sovereigns such as Bahrain or Oman.

This could be, for instance, if they were to experience a significant drain on their international reserves to maintain the status quo and external financial support was not forthcoming. However, this scenario is not our base-case expectation.

Why would higher-rated GCC sovereigns support lower-rated ones to defend their pegs?

We see two main reasons: to prevent financial contagion and promote their foreign policy interests. We believe that should the currencies of lower-rated Bahrain and Oman come under significant pressure, higher-rated sovereigns would provide financial support to prevent contagion to their own financial markets.

Another aspect of their support may be to advance their foreign policy interests in the region. Our report "How Middle Eastern And African Sovereigns Benefit From Gulf Financial Support," published Nov. 27, 2018, shows how GCC governments have significant regional aid programs, which, like the aid provided by other governments around the world, they can use as a foreign policy tool as well as a way of providing humanitarian or financial aid.

GCC financial support increasingly takes the form of deposits in central banks and other forms of conditional concessional funding, while budgetary grants, the most fungible form of aid, are becoming less prevalent.

Which GCC sovereigns would provide financial support to Oman?

The answer will likely depend on several factors including the extent of financial stress in Oman and regional political considerations. Bahrain and Oman were pledged $10 billion each in project funding by the other GCC sovereigns in 2011.

In Oman's case, however, we understand that disbursements were largely only realized from Kuwait. Oman's neutral foreign policy stance potentially affects the propensity of its neighbors to provide it with financial support.

However, we believe that either in their own self-interest — to prevent financial contagion — or to advance their own foreign policy agendas, one or several GCC sovereigns would provide financial support to Oman in the case of financial distress (see "How Oman Could Weather Tough Funding Conditions Ahead," published May 11, 2020).

We note the extremely high level of external liquid assets available for use by sovereigns in the region should they deem it politically expedient (see "Government Liquid Assets And Sovereign Ratings: Size Matters," published Aug. 27, 2018).

Indeed, Oman itself has a relatively strong balance sheet despite rapidly rising government debt in recent years, reducing the likelihood that it will require near-term external financial support. We estimate Oman's government liquid assets at just over 60% of GDP in 2020, albeit falling relatively sharply to a still high level of 47% in 2023 (see "Oman," published April 18, 2020).

Are the GCC pegged exchange rate regimes supportive of sovereign ratings in the region?

In our view, yes, they are. However, there is necessarily a trade-off against the benefits of more flexible exchange rate regimes. Fixed exchange rates have worked well for the GCC through various oil price peaks and troughs. This reflects the reality that energy production (a dollarized industry) makes up a sizable share of gross value added in the region.

Given the dollar-based nature of their economies, the pegs have provided a nominal anchor for inflation, supporting monetary policy credibility by outsourcing it to the US Federal Reserve. However, adopting US monetary policy can also bring challenges because at times interest rate settings may not be supportive of nonoil output growth in the GCC.

Moreover, economic theory suggests that a flexible exchange rate allows a currency to act as a shock absorber during balance-of-payments crises and increases monetary policy flexibility, via the interest rate channel.

A floating exchange rate can provide a shock absorber for small open economies facing external shocks, by boosting exports and supporting domestic demand and output. However, in our view, these effects are likely to be relatively muted for the GCC because, in many cases, their nonhydrocarbon export base is small, limiting the benefits of a more competitive exchange rate.

Even the GCC economies with a more diversified export base, such as Bahrain and the UAE, import most consumer, intermediary, capital goods, and labor. The negative impact on import costs of a devaluation or depreciation of the exchange rate is likely to more than offset any positive impact on nonhydrocarbon exports, while the side effects of overvalued exchange rates (were oil prices to remain at current levels indefinitely) appear to us to be manageable.

We believe that the inflationary pressures and social costs of a devaluation could increase domestic political pressures, an outcome that GCC governments would want to avoid. We note, however, that a currency devaluation would increase the local currency value of US dollar-priced oil- and gas-related revenues.

This would improve government fiscal balances as long as governments are able to contain their spending, which may not be so easy given the inflationary aspects of such a devaluation. — S&P Global Ratings

These were the details of the news Why GCC pegged exchange rate regimes will remain in place for this day. We hope that we have succeeded by giving you the full details and information. To follow all our news, you can subscribe to the alerts system or to one of our different systems to provide you with all that is new. 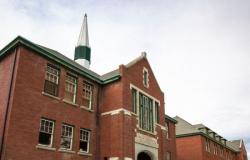 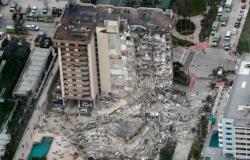 Dozens unaccounted for after high-rise collapses in Florida