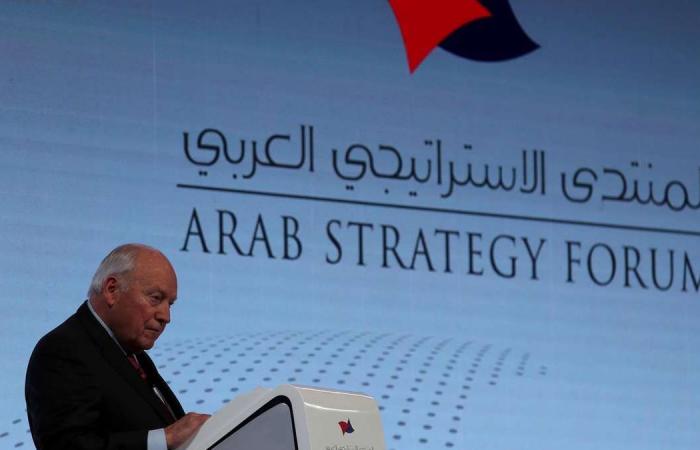 Hind Al Soulia - Riyadh - The United States' withdrawal from much of the Middle East has caused alarm among America's allies, a former US vice president has said.

Dick Cheney, 78, told an audience that a departure from "sound traditions" of US foreign policy had emboldened regimes in the region, including Iran.

The career politician, who wielded significant influence in foreign policy while serving under George W Bush, spoke out at the Arab Strategy Forum in Dubai.

He warned Iran, Syria and Russia had all emerged stronger from Washington's reduced role in the Middle East, including a withdrawal of troops from northern Syria.

“When I look around the region today and watch for any departure from American policy from the sound traditions I have described, frankly I’m concerned and have been for some years,” said Mr Cheney, who was US secretary of defence for nearly four years.

“Iran is the prime case in point. We know what the Mullahs in Tehran want. The nuclear deal made five years ago was unwise in the extreme.

“It offered no concrete assurances for US or regional security. It rewarded the Mullahs for 35 years of bad faith and a regime that bullies its people.

“It has only worked in our favour when Donald Trump declared the agreement null and void.”

The annual Arab Strategy Forum on Monday began with the discussion of a report entitled ‘The World in 2030: Trends, Transitions, Challenges and Opportunities’.

The paper was released by the forum in partnership with the Future World Foundation, an independent non-profit organisation which aims to advance human development.

It also predicted heightened security tensions in the Middle East, ramped up by geopolitical and sectarian affiliations.

It forecast that the Quds Force, a unit in Iran's Revolutionary Guard mandated to carry out intelligence operations abroad, would continue to shake the stability of the region through cyberattacks.

“Tehran continues adding to its military capability and its stock of ballistic missile, subsiding terrorists spreading trouble and violence,” said Mr Cheney, who was the 46th vice president of America from 2001 to 2009.

“If anyone is against American influence in the region, it is the regime in Tehran.

“Russia is always on stand-by. It is how Russian troops swept in to northern Syria and it is still an unfolding story.

“No one will remember the American withdrawal as our finest hour. It was a surprise to many of us.

“There are two courses of action available trust and self-restraint, and trust in ourselves and our allies with complex responsibilities.

“None of us have any illusion of the cost and effort to meet those responsibilities or to face the many challenges we have to protect our friends here, that includes any policy of disengagement.”

These were the details of the news Former US vice president Dick Cheney criticises America's withdrawal from Syria for this day. We hope that we have succeeded by giving you the full details and information. To follow all our news, you can subscribe to the alerts system or to one of our different systems to provide you with all that is new.