Hello and welcome to the details of VIDEO: Chinese diplomat Li Zhaoxing brings Gulf Today with him on stage at Arab Strategy Forum and now with the details


China’s ex-Foreign Minister and Ambassador to the United Nations Li Zhaoxing brought a copy of Gulf Today with him on stage at the Arab Strategy Forum in Dubai.

The Chinese diplomat and politician read a few articles and praised the paper in front of His Highness Sheikh Mohammed Bin Rashid Al Maktoum, Vice President and Prime Minister of the UAE and Ruler of Dubai, and all the dignitaries at the event.

Zhaoxing was speaking at the forum on ‘The Global Order 2030: China and the United States,’ along with panelist former US Vice President Dick Cheney. They discussed the place of the US in the future world order, the vision and motives of China's foreign policy over the next 10 years, and the roles of the two superpowers in the Arab region over the next decade.

The 12th edition of the annual Arab Strategy Forum is held under the patronage of Sheikh Mohammed Bin Rashid.

Within the context of current socio-political tensions, conflicts and issues, the Forum will analyse their likely consequences to forecast what the world will look like by 2030 with the aim of charting a roadmap for today’s and tomorrow’s leaders in their preparations to achieve lasting stability, peace and harmony. The agenda reaffirms Dubai’s position as a pioneer in convening the globe’s prominent decision makers to engage in meaningful dialogues that will shape the world that future generations inhabit.The forum will also release three reports offering insights into the future: ‘The World in 2030 – Trends, Transformations, Opportunities and Challenges’, ‘11 Questions for the Next Decade’, and ‘Mosque & State: How Arabs See the Next 10 Years’.

These were the details of the news VIDEO: Chinese diplomat Li Zhaoxing brings Gulf Today with him on stage at Arab Strategy Forum for this day. We hope that we have succeeded by giving you the full details and information. To follow all our news, you can subscribe to the alerts system or to one of our different systems to provide you with all that is new. 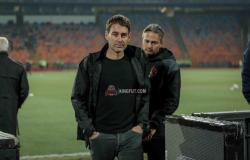