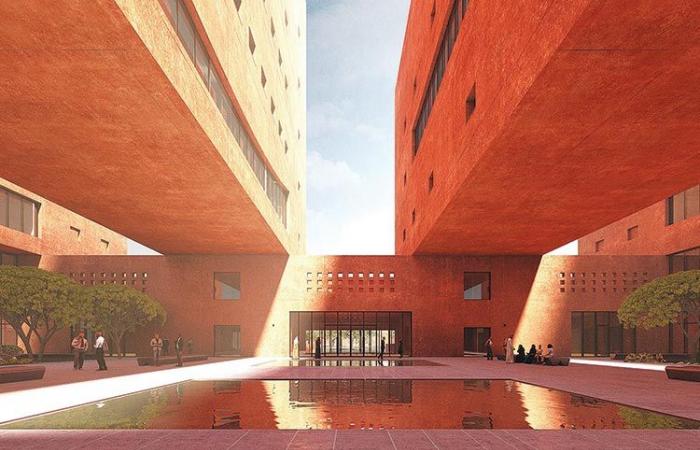 Nevin Al Sukari - Abu Dhabi - The Africa Institute is dedicated to the essential study and documentation of Africa and its people, its consciousness, its past and culture.

A much deeper appreciation and more insightful learning-cum-experience on Africa rises from Sharjah come 2023 as a highly-specialised inter-disciplinary academic and research centre is set for expansion and refurbishment next year.

“The basic goal for us is really the training of a new generation of Africans or African scholars who are critical, who are up-to-date on the nature and theory of African studies and the African Diaspora study. We will start accepting (post-graduate students) by the Fall of 2023. We will be announcing soon the list of prominent faculty members,” said The Africa Institute director Dr. Salah Hassan.

Al Qasimi said: “We selected David Adjaye to create the first purpose-built home for this vital institution because of his experience in designing buildings that foster learning, collaboration, and community building.”

“We started working together in 2017 so that the vision for The Africa Institute and the building that supports its critical mission would be developed hand-in-hand. David’s ability to create such a beautiful sequence of diverse spaces and welcoming sense of place will make The Africa Institute a nexus for knowledge-building and learning that will serve people in the region and our partners across Africa and around the world for generations to come,” she also said.

Adjaye, noted for artistically crafting his architectural acumen with the general ambience of his masterpieces, said: “I am deeply humbled for the opportunity to design The Africa Institute in Sharjah, a project which introduces an entirely new type of thinking and mission into the global academic arena.”

The Africa Institute which shall also be a repository of the arts, was inaugurated on Sept. 25, 2018 by His Highness Dr. Sheikh Sultan Bin Mohammed Al Qasimi, Member of the UAE Supreme Council and Ruler of Sharjah. That was 42 years after the emirate hosted the historic Dec. 14 to 18, 1976 “African-Arab Symposium” at The Africa Hall, attended by 45 internationally-recognised scholars and aficionados on African and Arab culture and affairs. The purpose was for better understanding and closer cooperation.

At the recent virtual press briefing, Hassan who also serves as Cornell University (New York, USA)-Department of Africana Studies and Research Centre-Africa and African Diaspora Art History and Visual Culture Arts & Sciences professor, hailed Adjaye’s on-boarding, describing his work as “an architectural monument and minaret for the future of African Diaspora scholars across the world.”

Hassan explained the significance of The African Institute and why it is but right that this incubator of interest on the second largest continent in the world by land area, is situated in the “Cultural Capital of the UAE,” recognised by the United Nations Education, Scientific and Cultural Organisation as the “World Book Capital” in 2019.

He said: “The conception of The African Institute is based on the premise that African Studies is a global enterprise. Rather than narrowly defined by geography or territorial boundaries, Africa is a global presence starting from the early times; if we start with the first human workings through the Arabian Peninsula crossing the sea, populating the whole world, which archeological and other studies have proven. It has also been through diaspora, whether it has been voluntary or involuntary, whether through slavery or other means of migration, (that) Africa has a global presence. Not only as communities of migrants but, as an intellectual and cultural (source) that have actually shaped Europe and the West and other parts of the world; as they shaped Africa through colonialism or capitalism and other factors that demonstrated this.”

Hassan pointed out two reasons why Sharjah is “uniquely positioned” as the domicile of The Africa Institute. First was the landmark 1976 summit that definitely manifested the “interest on Africa.” Second was the fact that the emirate is in itself host to “different types of population or a mixed population.”

Citing the demographics of Sharjah and its valuable connect to the institute, Hassan continued: “The linkages with Africa either be through migration or the whole movement of population across the Indian Ocean, that is why one of the major assets of (the centre) will be exploring the lesser known (facts and aspects) of the Indian Ocean and Africa and into the Arabian Peninsula than the cross-Atlantic which is very well-known. The Africa Institute will be dedicated to the essential study and documentation of Africa and its people, its consciousness, its past and culture.”

Aside from the post-graduate programmes, people from all over the world may also enrol for “diplomas on African languages,” Humanities and Social Sciences. Other areas of interest offered will be the “Black or African Intellectual Traditions” while the usual “Country-In-Focus” shall be continuing.

These were the details of the news Africa Institute ‘a nexus for knowledge building’ for this day. We hope that we have succeeded by giving you the full details and information. To follow all our news, you can subscribe to the alerts system or to one of our different systems to provide you with all that is new.