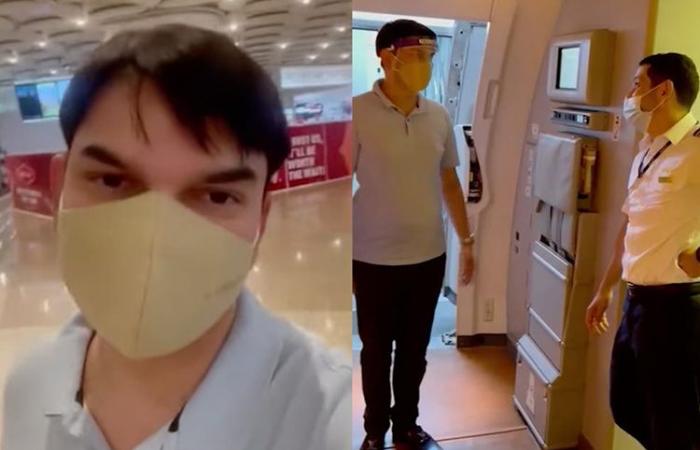 A Dubai resident says he had a “money-can’t-buy experience” after it turned out that he was the only passenger on a recent Emirates flight from India as the deadly second wave of COVID-19 continues to hit air travel.


Bhavesh Javeri boarded the 360-seater Boeing 777 from Mumbai, capital of the Indian state of Maharashtra, to Dubai on May 19 and recorded his experience in a video that has now gone viral.


“The rare opportunity of being the only passenger on EK501 to Dubai from Mumbai. Felt like I was chartering Boeing 777-300 which could carry up to 360 passengers just for myself,” he wrote.


The UAE has currently imposed travel restrictions on people coming from India in the wake of the second wave of Covid-19. Only some categories, including UAE citizens, diplomatic missions, and those holding golden residency, are exempted from these restrictions.


In the video he shared on Facebook, he says: “I am normally not the person who takes videos, but today I felt special because I think I am the only passenger on the Emirates flight to Dubai from Bombay.”


He goes on to show the near-empty Mumbai airport in the video before entering the aircraft. Javeri was cheered and welcomed with an applause by the crew as he boarded the flight.


The flight’s captain told him that he usually does a big public announcement, but he was going to give it directly because Javeri was the only passenger.


Javeri told the pilot: “I am honoured to be the only passenger. I am so happy and excited.” The pilot also offered to give him a tour of the plane.


"I normally book a business class ticket, but I thought, why not book an economy seat, the flight would have only a few passengers,” he told local media.


Javeri said he was initially denied entry into the Mumbai airport because his ticket did not have a date. He called up Emirates and that’s when he first heard that he was the only passenger on board and the crew was waiting for him.

He said he had “flown a charter flight from Dubai to Mumbai last June with nine passengers on a 14-seater aircraft, but it was nowhere close to this money-can't-buy experience,” according to The Times of India.

In the video, Javeri also shows the personalised announcements in the flight. When the flight landed in Dubai, the crew announced: “Javeri, welcome to Dubai international airport.”

These were the details of the news Only passenger on 360-seater Mumbai to Dubai Emirates flight describes ‘money-can’t-buy experience’ for this day. We hope that we have succeeded by giving you the full details and information. To follow all our news, you can subscribe to the alerts system or to one of our different systems to provide you with all that is new.