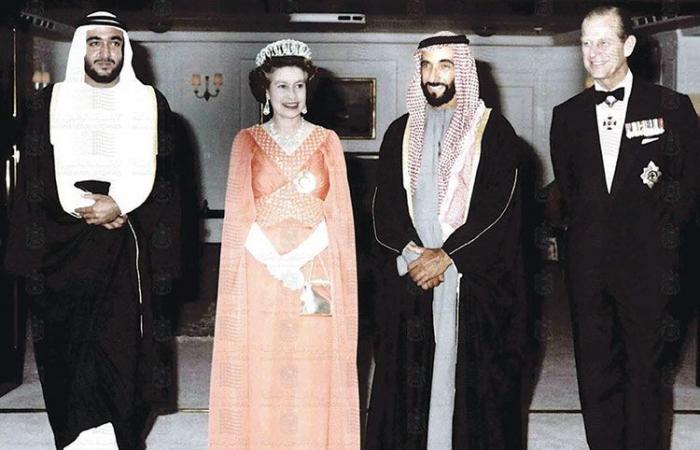 As the United Kingdom and its friends across the world are still mourning the death of Prince Philip, Duke of Edinburgh, the UAE still cherishes his presence on some historic occasions of the country.

The Royal Family is officially in mourning until Friday. The Prince died at the age of 99 on 9th April 2021 in Windsor Castle and his funeral was held on 17th April.

Prince Philip was present at the inauguration of Jebel Ali Port on 25th February, 1979.

In a picture in the collection of the UAE’s National Archives, Prince Philip is seen sitting on the dais while Queen Elizabeth II is delivering a speech on the occasion, in the presence of the late Ruler of Dubai, Sheikh Rashid Bin Saeed Al Maktoum, and Sheikh Hamdan Bin Rashid Al Maktoum.

The port, which is currently operated by DP World, has become the largest in the Middle East and the flagship facility of DP World’s portfolio of over 80 marine and inland terminals across six continents.

Jebel Ali Port is a gateway hub that enables trade across the region and beyond. It is a vital link in the global trade network, connecting eastern and western markets with North Africa, the Middle East and South Asia.

The Prince was accompanying the Queen on her first official visit to the UAE, as part of the 1979 Royal Gulf tour that started in Kuwait on 12th February and ended in Muscat, Oman, on 2nd March.

Other National Archive pictures show the Royals and Sheikhs at a dinner on board the Royal Yacht Britannia on 24th February 1979.

The Royals were hosted by the late Sheikh Zayed Bin Sultan Al Nahyan, the then President of the UAE; and current President His Highness Sheikh Khalifa Bin Zayed Al Nahyan, who was then Abu Dhabi Crown Prince.

The Royals toured Abu Dhabi, including a visit to the Corniche Hospital and the Al Khubairat British School.

The Royals visited the new Dubai Municipality building in Deira and as it was Sunday, they went to the Holy Trinity Church in Bur Dubai for a church service. The next morning, the Queen formally inaugurated Jebel Ali Port in the presence of Prince Philip. The next day, the Royals went to Dubai city and opened a desalination plant before leaving for Oman.

The Queen and Prince Philip had a second visit to the UAE in November 2010.

UAE HAS BEEN A MEMBER OF THE CAC SINCE 1972: Underlining the importance of safe and quality food globally amidst the situation caused by the COVID-19 pandemic, 300 experts from 50 countries have begun discussions on how to ensure food safety and quality.

The discussions, hosted by the Government of India and held virtually are under the rubric of the fifth session of the Codex Committee on Spices and Culinary Herbs (CCSCH) and the Codex Alimentarius Commission (CAC), inter-governmental bodies established jointly by the UN Food and Agriculture Organisation (FAO) and the World Health Organisation.

India is the host country for these bodies and the Spices Board of India functions as the Secretariat for organising their sessions. The UAE has been a member of the CAC since 1972. All other GCC states are also members of the CAC.

Inaugurating the current session, Rita Teaotia, Chairperson of the Food Safety and Standards Authority of India (FSSAI), cautioned against the growing risk of unscrupulous and intentional adulteration of spices through substitution because of their high value.

“Economically motivated adulteration is a major malpractice and we need to be extremely vigilant, particularly in the regulatory space. It is important that we have harmonised Codex standards for spices in global trade and this is a work that needs the highest priority for spices and culinary herbs that are being traded across the world.”

The present session, which will run till 29th April, will consider quality standards for dried and dehydrated ginger, cloves and saffron There are also three proposals for similar work to start on cardamom and turmeric. All these are used in Arabic cuisine and cuisines popular in the Gulf.

These were the details of the news UAE cherishes Prince Philip’s presence on historic occasions for this day. We hope that we have succeeded by giving you the full details and information. To follow all our news, you can subscribe to the alerts system or to one of our different systems to provide you with all that is new.