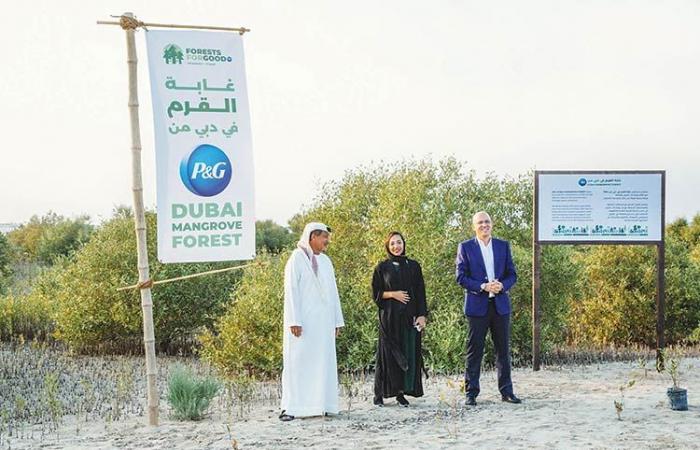 The total land area of mangrove forests in the UAE — those emerald lush along the beaches and waterways that offer surprises because of hanging, crawling and flapping animals that may also give visitors a peek-a-boo — is set to expand with the “birth” of another area bearing these salt-tolerant shrubs at the Abu Dhabi-Dubai border.

The new 500,000-square metre mangrove forest, nestled within the 2,000-hectare Jebel Ali Wildlife Sanctuary at the coastlines of Ghantoot in Abu Dhabi and Jebel Ali in Dubai is called the Dubai Mangrove Forest.

This was officially launched at sundown and before the Iftar on Monday by partners US consumer goods conglomerate Procter and Gamble (P&G), the Emirates Marine Environmental Group (EMEG) and HongKong-based forest blockchain technology innovator EcoMatcher. EMEG is a 25-year-old Dubai-based non-profit organisation under the patronage of Sheikha Manal Bint Mohammed Bin Rashid Al Maktoum, President of the Dubai Women’s Establishment. Ecomatcher, uses among others, a traceability platform that permits individuals involved in tree planting or in reforestations view progress of their respective trees.

The project is a component of the P&G #ForestsForGood campaign that includes reforestation and long-term protection of forests, biodiversity, and the rights and welfare of local and indigenous peoples.

The choice of the EMEG-managed Jebel Ali Wildlife Sanctuary as the new mangrove forest site is significant since the safe haven for over 300 species that include water birds, green turtle, the endangered hawksbill turtle and eagle ray, and lizards, is among the protected areas across the country and in the List of Ramsar Wetlands of International Importance.

Total land area of mangrove forests so far in the UAE is approximately 4,000 hectares, more than half of it in the capital. Their importance to life and environment — nesting for biodiversity, sustainable sources of livelihood and basic needs, maintenance of water quality, coastal defence, carbon storage — is among the legacy of the late His Highness Sheikh Zayed Bin Sultan Al Nahyan, Founding President of the UAE and Ruler of Abu Dhabi. These played a major role at the 49th anniversary of the nation on Dec. 2, 2020 having been chosen as the iconic symbol of the UAE heritage and culture.

EMEG president Maj. Ali Al Suwaidi said on Monday: “We are delighted to be announcing this unique initiative together with P&G and EcoMatcher. Nature alone can help us solve up to one-third of climate change. The aim of the Dubai Mangrove Forest is to help balance out Dubai’s cosmopolitan impact in agreement with (the) ‘Dubai 2040 Urban Master Plan, which aims to expand green spaces focused on enhancing the population’s well-being. Dubai Mangrove Forest will not only be used for foresting but also for animal rescue and species preservation.”

P&G Middle East/East & West Africa/General Export Markets chief executive officer Omar Channawi expressed gratefulness to “Major Ali, EMEG and EcoMaster” whose support for “our first Forest as part of P&G #ForestForGood Programme is something we hope will flourish around the world. (We) have undertaken a large number of initiatives to help protect, improve and restore nature around the world. Regionally, this campaign is focused on helping bring nature back to life, and we felt it particularly significant for the regeneration to take place in the desert.”

P&G intends to plant new mangroves on the entire sanctuary and also adopt the four to five-year-old mangroves to maximise the future carbon sequestration and offsetting potential.

These were the details of the news Expanse of mangrove forests expands majestically in UAE for this day. We hope that we have succeeded by giving you the full details and information. To follow all our news, you can subscribe to the alerts system or to one of our different systems to provide you with all that is new.