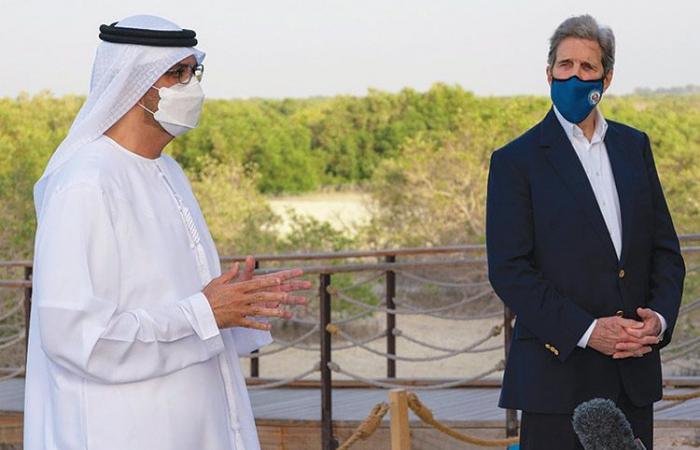 US Special Presidential Envoy for Climate, John Kerry, on Saturday visited a number of the United Arab Emirates’ (UAE’s) major strategic projects supporting the country’s efforts in the field of clean energy, limiting the consequences of climate change, and promoting sustainable development at the local and global levels.

Kerry took a helicopter tour over the world’s largest single-site solar project, Noor Abu Dhabi, with Dr Sultan Ahmed Al Jaber, the UAE’s Special Envoy for Climate Change and Minister of Industry and Advanced Technology. Kerry went to the headquarters of the International Renewable Energy Agency (IRENA) as well as MASDAR, a critical contributor to the UAE’s 400% expansion of its renewable energy portfolio over the last ten years. He also visited Mohamed Bin Zayed University of Artificial Intelligence (MBZUAI), the world’s first university with curricula devoted to driving sustainability solutions through innovations in artificial intelligence.

The day’s activities included a tour of other key solar installations, including Shams 1, one of the largest concentrated solar power plants in the world, where Kerry was briefed on the upcoming 2 GW Al Dhafra Solar Project, which recently set a new record for the lowest solar power tariff at 1.35 cents/kWh.

The US Special Envoy for Climate concluded the day with a visit to Abu Dhabi’s Jubail Mangrove Park. Mangroves, native to the UAE, have the triple benefit of preventing coastal erosion, encouraging biodiversity, and capturing more carbon per hectare than rainforests.

With millions of mangroves already planted across its coastal areas, the UAE has committed through its second Nationally Determined Contribution, to planting an additional 30 million by the year 2030. During the tour, Kerry met with a number of senior climate stakeholders in the UAE who outlined the major role the country plays in supporting clean energy projects to address the impact of climate change and mitigate its negative effects on ecosystems and various economic sectors. The UAE plays a pioneering role on climate action at the regional and international levels.

At a media brifing in the Jubail Mangrove Park, Abu Dhabi, Dr Al Jaber said: “The world is watching for concerted action on climate in 2021. Kerry’s visit showcases the UAE’s continued commitment to progressive climate action, which the UAE has always viewed as an opportunity to grow and diversify our economy, especially in light of these difficult times and of global efforts to reduce and mitigate the negative impacts of the pandemic on societies.”

Kerry is visiting Abu Dhabi to attend the first Regional Climate Dialogue, jointly hosted on 4 April by the UAE and the US. The Dialogue will bring together senior climate action representatives from the GCC, the MENA region as well as the UK.

Dr Al Jaber added: “I’m delighted that Kerry has joined us for an important climate dialogue with regional partners that will accelerate global progress toward climate goals. Over the past 15 years, the UAE has made bold commitments on climate change, domestically and internationally, and has demonstrated its ability to act on them. Looking ahead, we look forward to further building on this progress to turn political commitments into new practical solutions with long term economic benefits for the UAE, the MENA region and the world.”

From his part, John Kerry expressed delight at his visit to the UAE, noting it’s part of the efforts to make United National Climate Change Conference of the Parties (COP26) in Glasgow a success and “address the climate crisis with the seriousness it demand.”

“I’m delighted to have seen the largest solar field in the world’s largest single-site solar project, Noor Abu Dhabi. I also listened to Dr AL Jaber about the UAE’s plan to lead the world in terms of technology as well as in mitigation of emissions. It’s remarkable to find UAE trying to lead many other nations in the search of new technology to address the global climate challenge and in transitioning to the new economy while facing this crisis.

These were the details of the news UAE limits consequences of climate change remarkably for this day. We hope that we have succeeded by giving you the full details and information. To follow all our news, you can subscribe to the alerts system or to one of our different systems to provide you with all that is new.