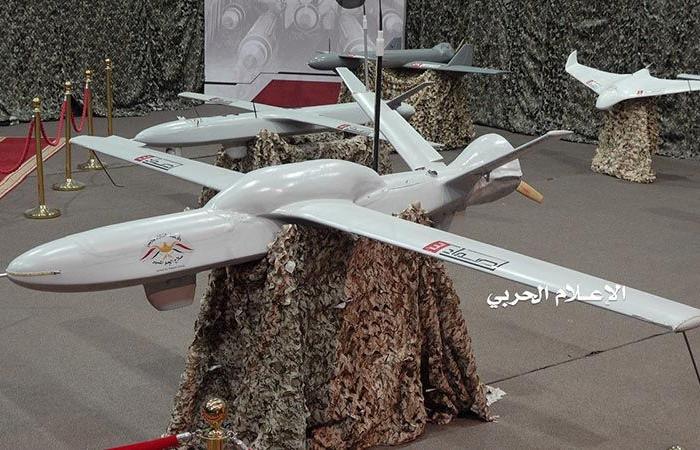 Nevin Al Sukari - Abu Dhabi - Drone aircraft are put on display at an exhibition at an unidentified location in Yemen. Reuters

The UAE has strongly denounced the Iranian-backed terrorist Houthi militias for attempting to target civilians and civilian structures in Saudi Arabia with explosive drones today before they were intercepted by the Coalition Forces.


In a statement by the Ministry of Foreign Affairs and International Cooperation (MoFAIC) on Sunday, the UAE affirmed that these systematic terrorist attacks by the Houthi group reflect its blatant disregard for the international community and all international laws and norms.

Earlier during the day, the Saudi-led coalition engaged in Yemen said that it destroyed 10 armed drones launched by the Iran-aligned Houthi movement, including at least five fired towards Saudi Arabia, state television channels reported.

The UAE Ministry also urged the international community to take an immediate and decisive stance to stop these repeated acts, which threaten security and stability in the Kingdom, stressing that the continued threat of these attacks in recent days is a grave escalation that represents new evidence of these militias' attempts to undermine security and stability in the region.


MoFAIC reaffirmed its full solidarity with the Kingdom over these terrorist attacks and reiterated its stance against all threats to the Kingdom's security, stability, and the safety of its citizens and residents.


The statement emphasised that "the security of the United Arab Emirates and the Kingdom of Saudi Arabia are indivisible, and that any threat facing the Kingdom is considered by the Emirates a threat to its security and stability."


The coalition did not specify locations in the kingdom but said the drones were aimed at "civilian sites." On Saturday, the coalition said it intercepted seven drones over 24 hours launched towards Khamis Mushait and one towards Jazan, both in southern Saudi Arabia.

The television channels cited the coalition as saying the escalation in Houthi attacks was a result of the coalition's "victories" in Marib and because of the Houthi's "hostile interpretation" of a decision by the new US administration in February to revoke terrorist designations on the group.

These were the details of the news UAE strongly condemns Houthi bomb-laden drone attacks on Saudi Arabia for this day. We hope that we have succeeded by giving you the full details and information. To follow all our news, you can subscribe to the alerts system or to one of our different systems to provide you with all that is new.