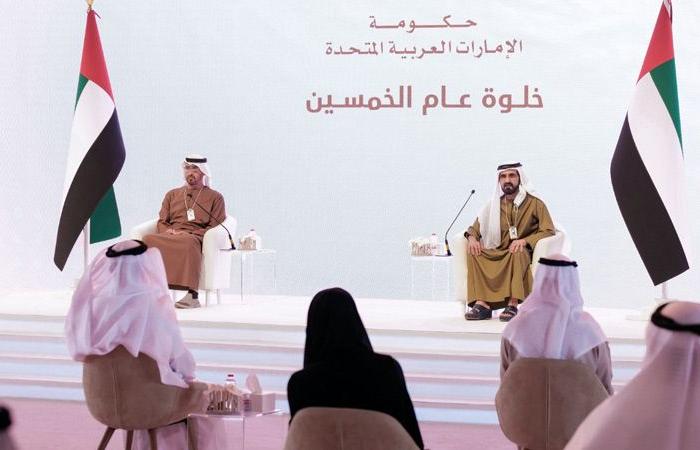 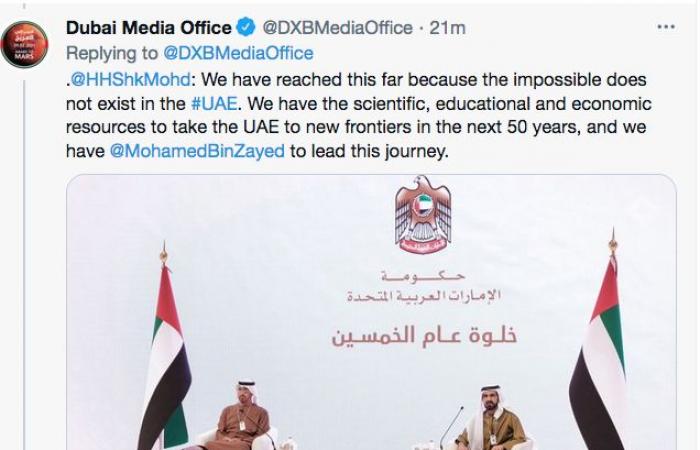 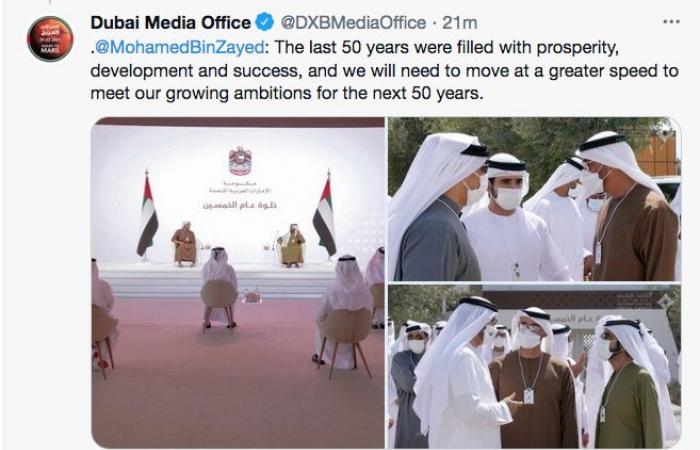 Hello and welcome to the details of Sheikh Mohammed, Mohamed Bin Zayed approve new National Agenda, strategic projects for next 50 years and now with the details 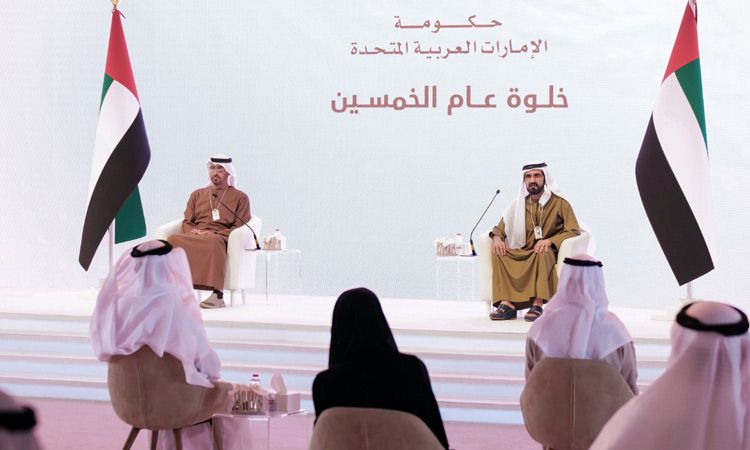 The 2021 ministerial retreat concluded on Wednesday with a new edition of the National Agenda and strategic projects to boost the country’s competitiveness and speed up development in the next 50 years.


The two-day retreat, chaired by His Highness Sheikh Mohammed Bin Rashid Al Maktoum, Vice President and Prime Minister of UAE and Ruler of Dubai, and His Highness Sheikh Mohamed Bin Zayed Al Nahyan, Crown Prince of Abu Dhabi and Deputy Supreme Commander of the UAE Armed Forces, brought together ministers, government officials and dignitaries to lay out a strategic framework for the development vision for the country’s next phase. 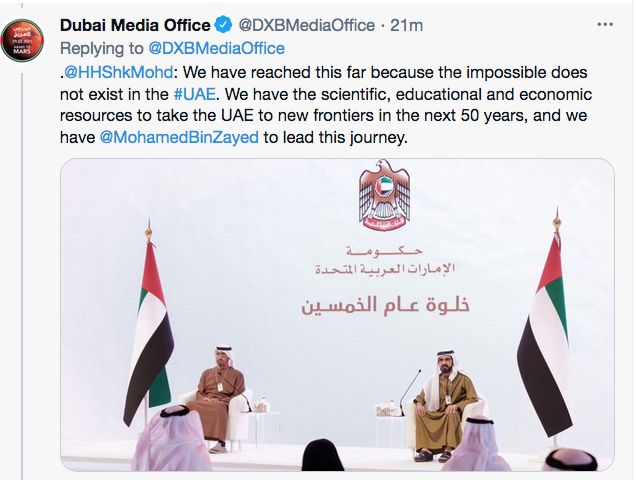 Sheikh Mohammed said since its formation, the UAE has presented a unique success story in all sectors, thanks to the futuristic vision and noble principles established by the founding leaders.


He noted, "Over the past 50 years, we started from the desert of our land to the desert of Mars. Our dreams will be even bigger for the next 50 years."


Sheikh Mohammed said the UAE presented an exceptional development model to the world that placed the human capital at the centre of all its development and economic plans.

He stressed that the UAE is committed to providing all the necessary elements to sustain the excellence and development that have long distinguished the country.

"We have reached this far because the impossible does not exist in the UAE. We have the scientific, educational and economic resources to take the UAE to new frontiers in the next 50 years, and we have Mohamed Bin Zayed to lead this journey."


He said the UAE has become a land of opportunities, home to a stable economy, advanced infrastructure, and agile and business-friendly legislative framework that attract entrepreneurs, investors and young talents.

The diverse society of the UAE that lives in coexistence, tolerance and peace in a lifestyle that places the human wellbeing as a priority, he noted, is the most celebrated achievement that makes the UAE home to all residents and citizens.


"Mohamed Bin Zayed’s participation in the retreat lays out a new and clear 50-year vision for the UAE." 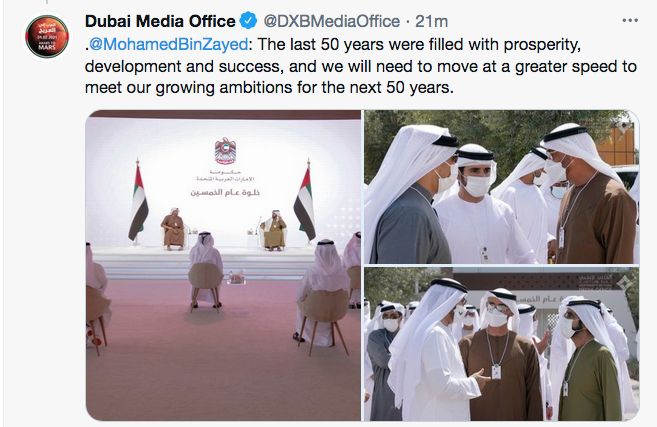 Sheikh Mohamed Bin Zayed said the UAE looks to the future, while proudly holding on to the memory of the founding leaders and working hard to sustain and advance the solid foundation they laid for the country.


He said, "The UAE has reached where it is today, thanks to the values of tolerance and coexistence that the founding leaders Sheikh Zayed and Sheikh Rashid established from the beginning of our journey.

The last 50 years were filled with prosperity, development and success, and we will need to move at a greater speed to meet our growing ambitions for the next 50 years."


He noted that the high motivation and energy of all participants in the retreat reflects the determination of the people of the UAE to succeed in all sectors of life.


Sheikh Mohamed Bin Zayed stressed that the UAE government has the necessary capabilities, talents and resources to draw the roadmap of the next 50 years.


"Our government teams in the next phase will only welcome people who will exert 10 times more efforts and energy to achieve greater successes. Our vision is to make the UAE an attractive destination for talents, ideas and investment."


During the retreat, Sheikh Mohamed Bin Zayed emphasised the trust and confidence in the federal government teams to continue shaping smart and flexible strategies that adapt to the rapidly-changing world.


He said, "We will preserve Mohammed Bin Rashid’s principle of always being number one. Our aim is to compete internationally."


Sheikh Mohamed Bin Zayed noted that the UAE has been at the forefront of development. "Thanks to the relentless efforts of government teams, the UAE has established itself as a leading model in innovative leadership thinking," he said and added, that through implementing innovation as a government culture, the UAE today adopts a futuristic vision to meet the aspirations of the people.


As part of the ministerial retreat 2021, UAE leaders approved a new edition of the National Agenda as a framework that shapes the work models and performance of the federal government and ministries. Strategic projects, under a new governance framework, will be launched with aims to boost competitiveness of the country’s vital sectors over the next phase.


The new agenda reflects the government’s long-term objectives to sustain economic stability across all sectors.


The agenda represents the government’s new strategic direction to boost the concept of "Balanced Development" through developing programmes and plans aimed at establishing sustainable development across the country’s social and economic sectors. It also involves developing an advanced work plan to adopt new technologies that boost the UAE’s status in the global digital transformation.


The two-day retreat presented a national brainstorming session that brought together government ministers and officials to lay out a strategic framework for the development vision for the country’s next 50 years. The retreat aimed to draw plans and initiatives that boost the country’s competitiveness across various sectors.


Ministers, government officials and dignitaries got together in interactive panels and discussions to develop ideas and suggestions to shape the future of the country’s vital sectors including economy, health, trade, education, community development and media. They reviewed growth opportunities and plans that increase government efficiency.


Participants addressed future development vision to achieve competitive leaps in the country’s vital sectors and reviewed new mechanisms to expand federal and local projects. Supporting work teams and applying the best global practices aim to create a shift in government work to make the UAE one of the most agile and adaptive nations. Economic policies and projects are underway to boost the national economy, and an integrated system will be developed to unify efforts of federal and local entities.

These were the details of the news Sheikh Mohammed, Mohamed Bin Zayed approve new National Agenda, strategic projects for next 50 years for this day. We hope that we have succeeded by giving you the full details and information. To follow all our news, you can subscribe to the alerts system or to one of our different systems to provide you with all that is new.