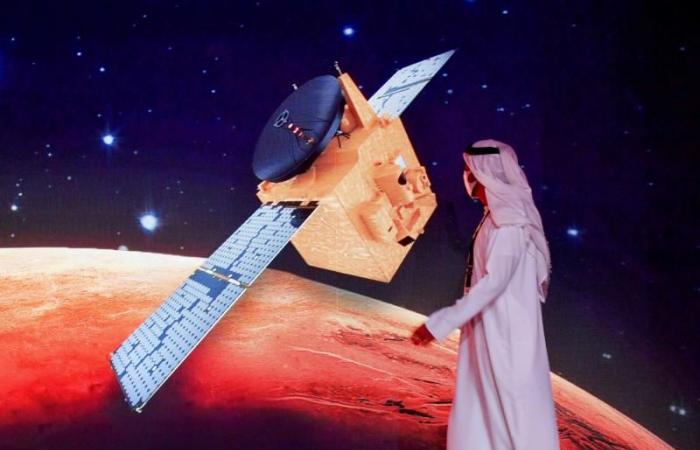 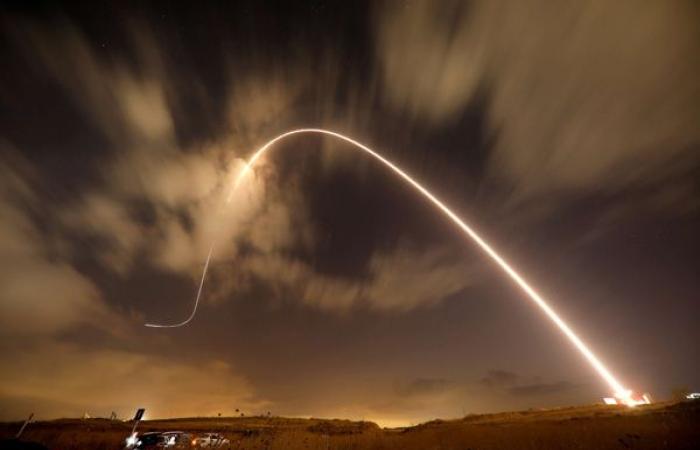 Hind Al Soulia - Riyadh - Countries of the region are scrambling to position themselves geopolitically on the global level through the space race.

An Emirati walks past a screen displaying the “Hope” Mars probe at the Mohammed Bin Rashid Space Centre in Dubai on July 19, 2020. (AFP)

LONDON--The Middle East is readying to enter at a reduced scale its space version of the Cold War, with successive announcements of space projects and missile development programmes. The Emirati space probe orbiting Mars and reconnaissance drones endlessly whizzing over the region’s skies are but the latest manifestations of this new regional landscape.

A few days after the entry of the Emirati Al-Amal (Hope) probe into orbit over the Red Planet, followed by the US Perseverance rover mission and China’s Tianwen-1 spacecraft, Turkish President Recep Tayyip Erdogan was quick to announce his country’s plans to send an unmanned spacecraft to the moon by 2023.

On Tuesday, the head of the Turkish Space Agency talked about training 10,000 space scientists within a decade so as to turn Turkey into an advanced country in the field space sciences.

The Iranians say that their missile projects are already at advanced stages. They have announced more than once the sending into space of experimental satellites as well as a spacecraft manned by a laboratory animal, in an implicit response to earlier Israeli space projects which changed from space exploration projects to plans for long-range missile defence systems to counter any possible Iranian attacks.

The space race in the Middle East reenacts, albeit at a smaller scale, the race that began in the fifties of the last century between the United States and the Soviet Union and then turned in the eighties into what was to become known as “Star Wars.”

All the parties concerned want to be part of this space race, through which they want to secure important geopolitical positions on Earth.

The years 2019 and 2020 were two pivotal years in the region as more countries felt the urge to quickly enter the race.

A turning point was probably the targeted attack, launched by the Houthis but with Iranians not very far behind, against the facilities of Abqaiq, Saudi Arabia, where they managed to score a hit at one of the most vital installations of the world using cruise missiles and drones.

It was not long before the Turkish drones, which were delivered to Libya, were able to turn the balance of war in favour of the Government of National Accord (GNA) as these drones cut off the logistical supply lines of the attacking Libyan National Army (LNA) led by Field Marshal Khalifa Haftar. Then, they managed to destroy a large number of the LNA’s vehicles, forcing the Haftar-led army to withdraw from the vicinity of the capital and retreat to a defensive position in Sirte.

The Turks subsequently settled the battles of Nagorny Karabakh in favour of their allies with relative ease by targeting Armenian defences and personnel, destroying entire tank regiments and armoured battalions.

Experts say that mastery of space technology is the key to dominating the skies in the region’s future battles.

This trend is based on the dual use of these technologies as a repeat of what happened during the Cold War, when satellite technologies intended for communication and television broadcasting were a welcome offshoot of espionage technology advances and satellites being put on orbit.
But the most important dimension in this race is human investment, a dimension described by the head of the Turkish Space Agency, Serdar Huseyin Yildirim, as the decisive element “in achieving the goals of the national space programme.”

Concerned countries seek to dedicate great human and material assets to the training of new generations of scientists and engineers who can contribute to the development of space programmes. This is the case of the UAE, which has announced a plan to establish a university for space sciences.

Perhaps the other pertinent aspect of the space race in the region is the mastery of technologies capable of countering missile and drone attacks.
Space detection and guidance technology provides a dual opportunity to develop systems for monitoring, tracking and destroying cruise missiles and small drones.

States interested in such systems and weapons have declared their intent to develop anti-missile missiles capable of hitting slow-moving targets or targets flying at low altitudes to avoid radar detection and sophisticated defences such as the Patriot missile system.

Halkin, a regional company specialising in the production and supply of precision-guided missiles, unveiled on Tuesday at the IDEX defence exhibition being held in Abu Dhabi the Sky Knight system, the first anti-missile system against artillery and mortar shells that is designed and manufactured in the UAE.

A tour of the IDEX exhibition reveals the growing importance of drones in modern warfare. Their prototypes occupy large areas of exhibition grounds as the difference between space and traditional warfare technologies rapidly fades away.

Iran is expanding its missile capabilities with expanding sizes, ranges and types. It recently conducted exercises in which it paraded its various missile systems and offensive drones. Its leaders make no secret of their intent to make the whole Middle East region vulnerable to their retaliatory attacks if Israel strikes at their nuclear or missile projects.

For its part, Israel is promoting the “Iron Dome” counter-technology that it developed after the 2006 war with Hezbollah in Lebanon, and has since improved its performance in repelling Katyusha rockets fired from Gaza.

The United States, in turn, announced that it is working with the Israelis to develop defence systems that are derived from the “Iron Dome” model and that it wants to expand the scope of research in this regard. This project comes after the Americans realised the danger constituted by drones in infiltrating and evading defence systems intended to counter ballistic missiles flying at high altitudes.

These were the details of the news The Middle East edition of ‘Star Wars’ takes shape for this day. We hope that we have succeeded by giving you the full details and information. To follow all our news, you can subscribe to the alerts system or to one of our different systems to provide you with all that is new.