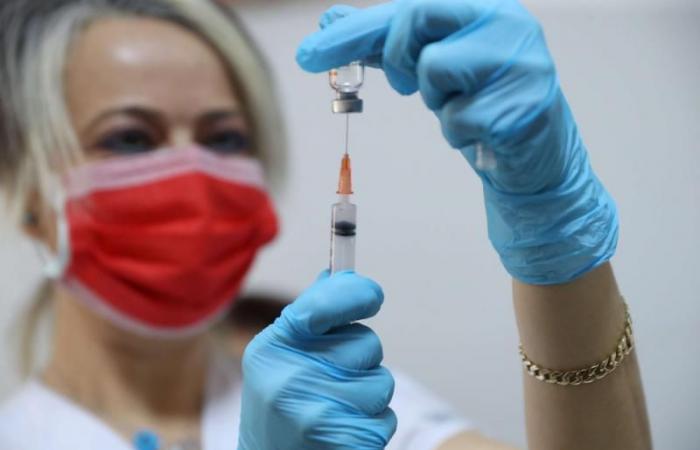 A nurse prepares an injection of the Chinese made Covid-19 vaccine Sinovac at the Sabiha Uzun Maternal Child Health Centre in Ankara, January 15. (AFP)

ANKARA--Countries of the Middle East are ramping up immunisation drives against COVID-19 infection, in vaccination campaigns totally or partially based on Chinese vaccines.

Jordan is pushing ahead with its vast vaccination campaign after having approved China’s Sinopharm vaccine for emergency use and  giving the green light to the US-German Pfizer-BioNTech vaccine.

Jordan’s King Abdullah II received a Covid-19 vaccine jab on Thursday, a day after the country launched its inoculation campaign.

Abdullah II was vaccinated alongside his son and Crown Prince Hussein and his uncle Prince Hassan, the royal palace said in Twitter posts accompanied by pictures of them getting a shot in the arm.

Jordan kicked off its Covid-19 vaccinations on Wednesday with injections for healthcare workers, people with chronic illnesses and those over the age of 60.

The government has said it hopes to vaccinate a quarter of the country’s 10 million inhabitants, and the jab would be given free of charge to Jordanians and foreign residents.

In a small sign of hope, Jordan’s Prime Minister Bisher al-Khasawneh said Wednesday that restrictions including a Friday curfew would be gradually eased from this week and that schools would reopen from February, following a fall in infection rates in recent weeks.

“The government will work to reopen different sectors in a careful way that protects citizens and the national economy,” Khasawneh told lawmakers.

The government says its priority is to give the vaccines — which are free for Jordanians and foreign residents — to about a quarter of the country’s 10 million inhabitants.

Ankara launched the nationwide programme on Thursday, vaccinating health workers first, and inoculated more than 285,000 people on the first day. As of 1601 GMT, the total was 600,040.

The government has credited its nationwide distribution of the vaccines earlier this week, as well as its digitised health records and hospital services for the rapid operation.

Some 3.23 million people have been inoculated in Britain and, according to the Our World in Data website, 2.16 million in Israel.

In Russia, the RDIF sovereign wealth fund said on Wednesday 1.5 million Russians had been inoculated with the Sputnik V vaccine.

Indonesia, which is also using the Sinovac shot, has inoculated 15,301 people over the past two days, a senior health ministry official there said.

Worldwide trials of the shot made by Sinovac Biotech Ltd , called CoronaVac, have shown wide-ranging efficacy rates, leading to some criticism.

Turkish President Tayyip Erdogan called on Turks to ignore the criticism levelled at the Sinovac vaccine. He received his first dose of the vaccine on Thursday and urged other politicians to endorse the programme.

Turkey has reported more than 2.3 million COVID-19 infections and 23,000 deaths since March.

Bahraini ministry of health  has announced that a January shipment of the Pfizer-BioNTech vaccine to the Gulf state will not arrive on time but second doses of the jab already scheduled will not be affected.

Bahrain offers its citizens free of charge either the Pfizer-BioNTech vaccine or one manufactured by Chinese state-backed pharmaceutical giant Sinopharm.

Bahrain has the third highest rate of vaccinations per capita in the world so far, according to the Our World in Data website, which is run by an Oxford University research programme.

“The delay … will not affect citizens and residents receiving the second dose of the vaccine over the upcoming period, according to current scheduled dates and the availability of the needed quantity for them,” the health ministry said in a statement carried by state news agency BNA.

The UAE has approved the vaccine developed by Sinopharm’s China National Pharmaceutical Group and has made it available to the general public. Dubai emirate is inoculating people with the vaccine produced by Pfizer and BioNTec.

The UAE is participating in Phase III trials for the Sinopharm vaccine and for Russia’s Sputnik V shot.

A number of Gulf states including Saudi Arabia, Qatar, Oman and the emirate of Dubai have also purchased the Pfizer jabs.

US pharmaceutical firm Pfizer this week said there would be a temporary impact on shipments in late January to early February caused by changes to manufacturing processes to boost production.

These were the details of the news Middle East countries push Chinese vaccine campaigns for this day. We hope that we have succeeded by giving you the full details and information. To follow all our news, you can subscribe to the alerts system or to one of our different systems to provide you with all that is new.