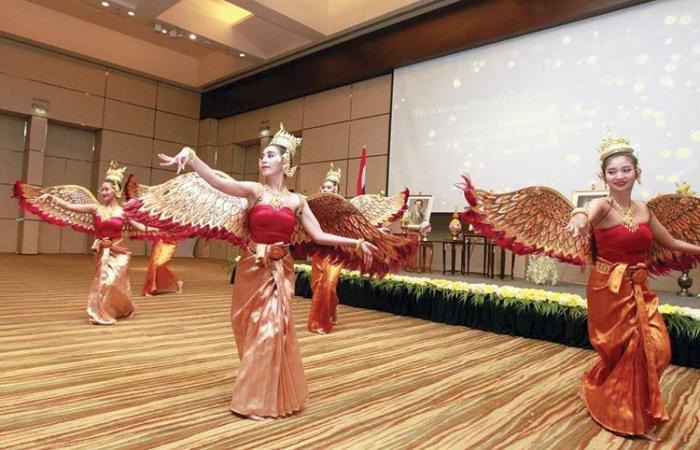 Hello and welcome to the details of VIDEO: Burj Khalifa lit up with Thai flag colours to mark Thailand’s National Day and now with the details

Nevin Al Sukari - Abu Dhabi - The Thai traditional dance depicts the movements of the Kinnaris, the half-bird, half-woman creatures of the Himavanta Forest based on Hindu mythology. John Varughese/Gulf Today

The Royal Thai Consulate General in Dubai hosted on Thursday a reception in celebration of Thailand’s National Day and Father’s Day, co-observed with the 92nd Birth Anniversary of the late King Bhumibol Adulyadej The Great.

Chief guest at the buffet dinner held at Park Hyatt in Dubai was UAE Minister of Community Development Hessa Bin Essa Buhumaid who received upon her arrival from Madame Angkana Sirivat, wife of Consul General to Dubai and the Northern Emirates Chairat Sirivat, a Phuang Malai garland, indigenous to the Southeast Asian kingdom.

In full attendance were the other Team Thailand in the UAE members composed of Thai Trade Centre (Dubai), Tourism Authority of Thailand (Dubai), and Thai Airways International (Dubai).

At 7.45pm, Burj Khalifa was lit with the red-white-blue national flag of Thailand.

In his speech, Consul General Sirivat traced the diplomatic relations between the UAE and Thailand having birthed on Dec.12, 1975.

“Since 1975, we have witnessed the strengthening of relations and enhanced cooperation between the two countries. The UAE is Thailand’s number one trading partner in the Middle East. The bilateral trade value at the end of the third quarter of 2019 has flourished to more than $8,000 million. In addition, the UAE has been the largest import source of crude oil for Thailand since 2000. In terms of people-to-people contacts, Thailand has been among the top destinations for UAE visitors. This year, we have already welcomed more than 120,000 tourists from the UAE while the UAE has become increasingly popular among the Thai tourists and received approximately 40,000 Thai visitors.” Six thousand Thais live across the seven emirates employed in the airline, construction and spa sectors, according to reliable sources from the Association of Southeast Asian Nations (Asean) Cultural Day last Sept. 19 in Dubai.

On behalf of Bangkok and the “People of Thailand,” Sirivat congratulated “the Government and the People of the UAE on the 48th Anniversary of the Spirit of the Union, and the Year of Tolerance, under the guidance of His Highness Sheikh Khalifa Bin Zayed Al Nahyan.” He expressed gratitude to the “UAE Government for the cooperation extended to (him) and the members of Team Thailand in performing (their) diplomatic and consular duties.” Sirivat segued to the presentation of the Thailand Pavilion at the “Expo2020 Dubai” pointing out similarities between the thrust and policies of the UAE and Thailand for a better future through transformative pursuits anchored on innovation, science and technology.

On a plot of 3,606 square meters in the Mobility Sector of the “Expo2020 Dubai” site, the “Mobility for the Future” themed-pavilion mirrors Bangkok’s government policy known as “Thailand 4.0” whose four objectives are prosperity, security and sustainability for all—by way of a more improved heavy industrial economy, driven by innovation and technology (the Internet of Things), research & development, and creativity; without abandoning the nation’s traditional charm (inter-generational values).

Just as Madame Sirivat presented a Phuang Malai garland to Minister Buhumaid on Thursday evening, the expected 1.7 million pavilion visitors would be knowing the significance of the lei and flowers to the Thais by way of an iconic display at the frontage. Over 500 woven artificial DokRak—a Southeast Asian shrub otherwise known as Crown Flower (either in white and burgundy or purplish/lavender) because of the crown-like appearance at its centre that holds either slender-pointed or roundish petals—will form the upper façade.

The colour of gold will play significantly in the pavilion as Thailand is within the Suvarnabhumi Peninsula, the “Land of Gold” in Southeast Asia.

Sirivat echoed the big role of sustainability in any undertaking a country is into when he mentioned Thailand’s 2019 chairmanship of the 10-member Asean whose aim is to achieve “Advancing Partnership for Sustainability.” “Thailand attaches great importance to sustainable development as it is the concept that has been known and practised in Thailand for decades, through His Majesty the late King’s Sufficiency Economy Philosophy, our home-grown approach to sustainable development which we have been sharing with the (Asean) region and the world.”

These were the details of the news VIDEO: Burj Khalifa lit up with Thai flag colours to mark Thailand’s National Day for this day. We hope that we have succeeded by giving you the full details and information. To follow all our news, you can subscribe to the alerts system or to one of our different systems to provide you with all that is new.