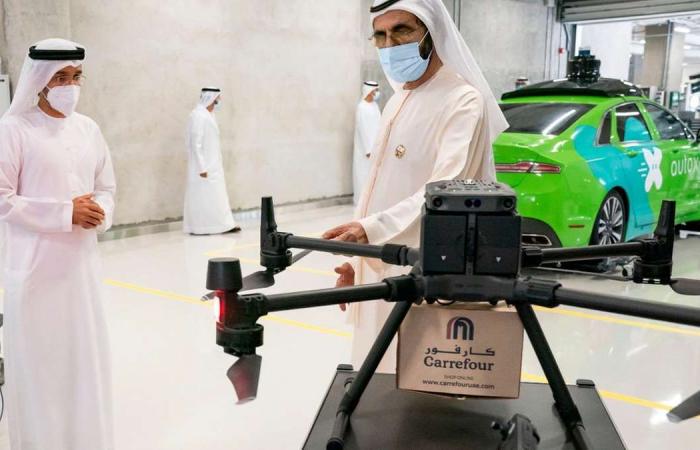 The Vice President and Ruler of Dubai inspected self-driving devices, industrial respirators and state-of-the-art drones during a tour of Dubai Future Laboratories on Monday.

The ambitious plans for the hubs of ingenuity – with a focus on aviation, energy, blockchain and entrepreneurship – were unveiled by Sheikh Mohammed last October.

He said at the time that the new labs, overseen by Dubai Future Foundation with input from major companies such as Emirates Airline, would grow to become an important centre for technological advancement.

"Our end goal is to make these labs a hub for launching future-oriented innovations that will eventually upgrade our business and service sectors," he said.

Sheikh Mohammed witnessed those bright plans taking shape during a visit alongside his son, Sheikh Hamdan bin Mohammed, the Crown Prince of Dubai.

Sheikh Mohammed said the UAE had placed its faith in a knowledge-based future led by scientific and technical expertise.

He said the UAE has taken a crucial first step in its ongoing journey to cement its place as a leading player on the global stage.

Harnessing Emirati talent will be at the forefront of a national effort in which there will be no boundaries to success.

"The start of the rain is a droplet and the thousand-mile journey starts with a step," said Sheikh Mohammed.

"What I have seen today is a flooding rain and thousands of miles our youth have crossed in new technological applications.

The Aviation Future Lab is supported by leading aviation companies, including Emirates and Airbus, and will support scientific research and engineering projects.

The lab will help to develop solutions to major challenges facing the industry, such as reducing carbon emissions.

The Blockchain Future Lab will harness rapidly developing technology such as artificial intelligence, provide new ideas and helping to turn them into a reality.

Dubai Electricity and Water Authority will be heavily involved in the Energy Future Lab, which will have a sharp focus on renewable energy and improving digital services.

The Entrepreneurship Future Lab, with a variety of meeting and conference rooms, will provide a platform for start-up businesses and ambitious entrepreneurs operating in the technology sector, helping them to obtain business licences more easily.

These were the details of the news Sheikh Mohammed bin Rashid tours Dubai Future Labs for this day. We hope that we have succeeded by giving you the full details and information. To follow all our news, you can subscribe to the alerts system or to one of our different systems to provide you with all that is new.