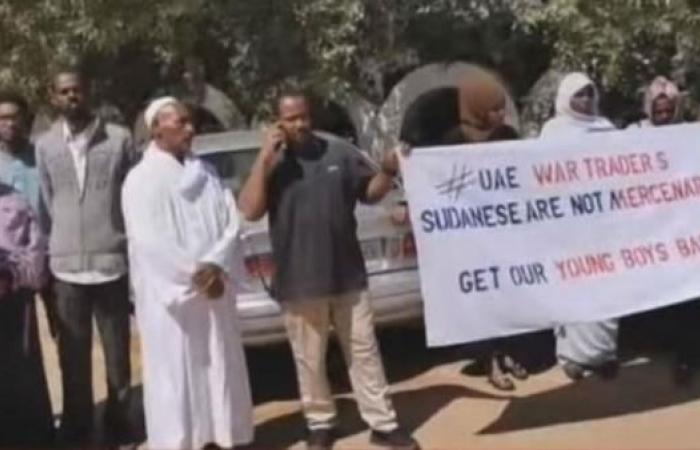 Thank you for reading the news about 'No mercenaries': Sudanese protest UAE's devious Yemen war recruitment and now with the details

Aden - Yasmine El Tohamy - Dozens of Sudanese gathered outside the UAE embassy in Khartoum on Sunday, to protest what they say is a calculated campaign by Abu Dhabi to lure citizens to fight in the deadly conflict.

Dozens of Sudanese citizens protested in front of the UAE embassy, and held up signs, which said: "No to mercenaries", "No to fraud", and "No to deception", Anadolu reported.

The demonstration came after a Sudanese man called on the country's transitional government to intervene after his brother was allegedly lured to the UAE and forced into a military training camp, local media reported.

The accusations, which have gone viral on Sudanese social media, have highlighted the controversial role of Sudanese militiamen in Yemen and Libya.

Abdullah Al-Tayeb Yusuf told Al-Jazeera Mubasher that his brother travelled to the UAE after responding to a job advertisement for security guards in the country in October last year.

Upon his arrival in the country, however, Yusuf's brother was allegedly forced into a military training camp alongside around 150 others.

"My brother told me that he was trained in the UAE to handle heavy weapons, and he was given the option to either go to Yemen or Libya after they offered him a large sum of money," Yusuf said.

Sudanese digital media platform Wakeep later shared images of what it said were samples of contracts offered to nationals to work as security guards in the UAE by the Black Shield security company.

The documents, which could not be independently verified, appear to have been stamped by the Emirati embassy in Khartoum.

After being lured to the UAE on false pretenses, the Sudanese migrants have their phones confiscated before being sent to the Al-Ghayathi training camp, Wakeep claimed.

Abu Dhabi has been accused of breaking a United Nations arms embargo on Libya to support rogue General Khalifa Haftar.

A confidential UN report unveiled in October last year alleged the presence of a thousand Sudanese militiamen in the eastern Libyan city of Benghazi.

According to the report, the Sudanese paramilitaries were sent in July in order to protect oil infrastructure there while the main bulk of Haftar's forces continued their assault on the capital Tripoli.

Sudan has denied the presence of its forces in the conflict, but a December report by The Guardian alleged the growing presence of Sudanese mercernaries fighting for both warring parties, putting the figure present as at least 3,000.

Leaked documents published by Al-Jazeera last year showed the UAE had gained permission from Khartoum to use Sudan's airspace and ports for the transportation of hundreds of mercenaries fighting in both Libya and Yemen.

The UAE is a key actor in Yemen, where Abu Dhabi first intervened in 2015 as part of the Saudi-led coalition backing the government of resident Abedrabbo Mansour Hadi.

Last year, cracks in the Saudi-Emirati alliance showed as the UAE-backed separatist Southern Transitional Council turned on Hadi and seized Aden, leading to weeks of infighting before a truce.

These were the details of the news 'No mercenaries': Sudanese protest UAE's devious Yemen war recruitment for this day. We hope that we have succeeded by giving you the full details and information. To follow all our news, you can subscribe to the alerts system or to one of our different systems to provide you with all that is new.