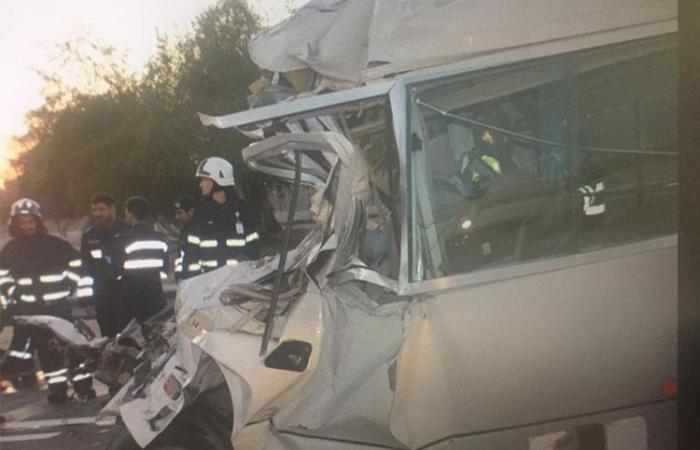 Hello and welcome to the details of VIDEO: 6 die, 19 others injured in Abu Dhabi road accident and now with the details

Nevin Al Sukari - Abu Dhabi - Rescuers at the site of the accident in Abu Dhabi.

19 others were also injured in the crash when a passenger bus rammed into the truck on Al Raha Beach Street.

Lieutenant Colonel Mohammed Abdul Rahim Al Hosani, Head of the Traffic Department, stated that the command and control center of the Operations Department in the Central Operations Sector in Abu Dhabi Police received an information, indicating the occurrence of a collision between a truck and a bus.

The Abu Dhabi Police team rushed to the site of the accident.

He pointed out that the swift by different in providing treatment and quickly transferring the other s to hospitals were laudable.

He pointed out that field measures were taken to secure the road and clear it.

The road was diverted from Sheikh Zayed Bridge towards Al Maqta Bridge, and the road was returned to its normal state.

In turn, Abu Dhabi Police revealed through surveillance cameras in cooperation with the Follow-up and Control Center - Abu Dhabi that the main cause of the accident was the result of a reckless behavior of a driver who was driving at a slow speed in front of the truck which confused other drivers.

This led the truck to stop in the middle

of the road to avoid ramming into the vehicle.

Abu Dhabi police have urged residents to drive cautious and adhere to the traffic rules to avoid such accidents.

These were the details of the news VIDEO: 6 die, 19 others injured in Abu Dhabi road accident for this day. We hope that we have succeeded by giving you the full details and information. To follow all our news, you can subscribe to the alerts system or to one of our different systems to provide you with all that is new.