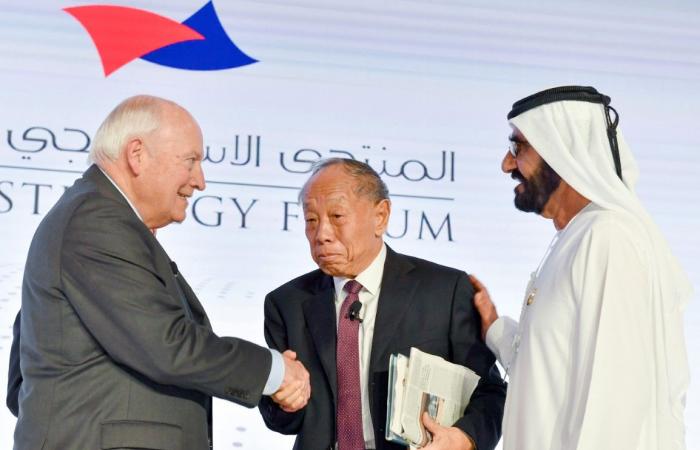 You are now following the details of the 'World is witnessing a new phase of political, economic and technological transformations,' Mohammed bin Rashid news and now we leave you with the details

Mohamed Nass - Dubai - The 12th Arab Strategy Forum, ASF 2019, held under the patronage of His Highness Sheikh Mohammed bin Rashid Al Maktoum, Vice President and Prime Minister of the UAE and Ruler of Dubai, today outlined a comprehensive list of the greatest challenges and opportunities facing the region and the world over the next decade in the run-up to 2030.

His Highness Sheikh Mohammed bin Rashid said, "The world is witnessing a new phase of political, economic and technological transformations that bring new challenges and opportunities ahead of us. We need to work together to explore the impact of these transformations on people, the main pillars of humanity’s development process throughout history."

He added, "Foreseeing and analysing the future is and will remain the major tool that enables us to remain ahead of the race and adopt the best solutions to build an integrated vision for the future.

The next decade brings us challenges full of contradictions. Establishing an open dialogue is our hope towards building a brighter future where potential and capabilities are directed to serving humanity."

He concluded, "Dubai and the UAE will continue to provide the platform that brings together global expertise for the benefit of mankind."

The annual gathering kicked off with an opening keynote from Mohammad Al Gergawi, President of the Arab Strategy Forum, who expressed optimism that the Arab world will become a major contributor to the growth of the world economy in the coming decade, despite its below-par performance in recent years.

"We are on the verge of a new global economic reality. How can we be a part of this new economic reality? The Arab world is capable of building a bright future, especially since our region now has increasing strategic importance and possesses huge human potential. It has a great future, provided that we take advantage of the upcoming opportunities," he said.

The event’s highlight was the concluding session, moderated by Sean Cleary, Chairman of Strategic Concepts and Founder and Executive Vice-Chair of the FutureWorld Foundation, former US Vice President Dick Cheney and former Chinese Foreign Minister Li Zhaoxing engaged in what the moderator called a "candid political exchange" on the role the two global economic powerhouses will play in the world order by 2030.

In the first session of the day, Nick Allan, CEO of Control Risks, outlined a comprehensive geopolitical risk map for 2020 that identified five key threats to global security.

In the second session, Cleary told ASF 2019’s packed audience that the centre of economic gravity is shifting away from G7 states as the rise of China, India and Southeast Asia will move the power balance in a new direction by 2030.

The refreshingly honest and heated panel discussion titled ‘The Future of Islamism in the Next Decade’, moderated by Faisal J. Abbas, Editor-in-Chief of Arab News, resulted in a call to establish an ‘Arabosphere’ to carry the identity of the Arab and Muslim population into the future.

Dr Vikram Mansharamani, Harvard University lecturer and author of Boombustology: Spotting Financial Bubbles Before They Burst, then took to the stage for a session titled ‘Is the World Heading Towards a Global Economic Recession?’ He announced that the world could be looking at a cyclical recession within the next three years, with performance across nearly 10 indicators showing alarming similarities to the period prior to the technology boom in the late 1990s that was followed by a significant global downturn.

A panel discussion titled ‘Economic Transformations in the Arab Region in the Next Decade’, moderated by Zeina Soufan from Dubai TV, saw Abdulrahman Al Hamidy, Director-General and Chairman of the Board of the Arab Monetary Fund, declare that the greatest challenge currently faced by the Arab world is its 18 percent average unemployment rate, which sits nine percent higher than the rest of the world. The panel outlined a major challenge facing the Arab region being the fact that Arabs represent 8.5 per cent of the global population, yet Arab economies contribute only 3.4 percent of global gross domestic product.

These were the details of the news 'World is witnessing a new phase of political, economic and technological transformations,' Mohammed bin Rashid for this day. We hope that we have succeeded by giving you the full details and information. To follow all our news, you can subscribe to the alerts system or to one of our different systems to provide you with all that is new.