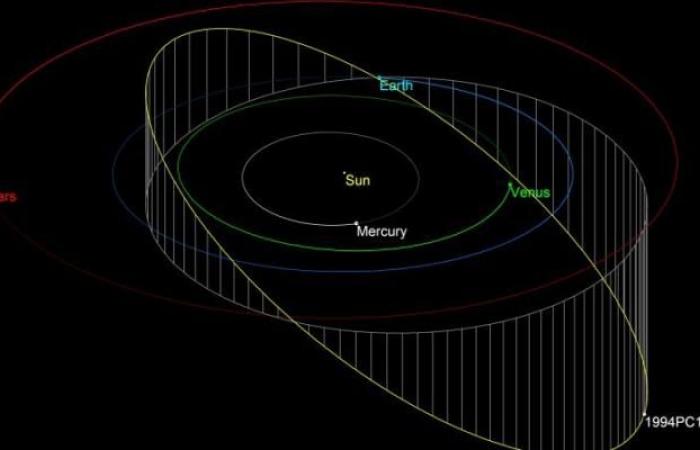 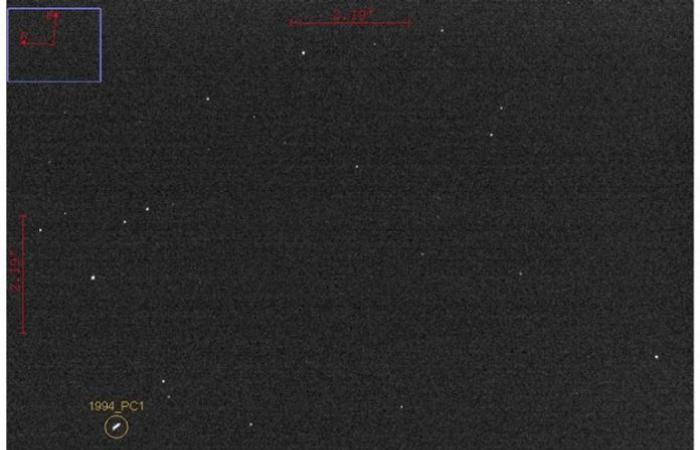 The International Astronomy Center in the Emirates, through the Astronomical Seal Observatory, was able to photograph the asteroid “1994 PC1”, as it passed, Tuesday, near the Earth.

The asteroid is only about one kilometer in diameter, and it was discovered in 1994, and it is classified among the group of potentially hazardous asteroids (PHA).

The International Astronomy Center said in a statement that Al-Ain News received a copy of it that the asteroid passed at a distance of only 1.93 million kilometers from Earth, which is a relatively small distance, and it is about 5 times the distance of the moon from the Earth, and its speed during its passage near the Earth reached 20 kilometers in one second.

The center is broadcast on

For the passing moments, it is a compilation of seventeen images, each image is only 10 seconds long, and the asteroid appeared as a small line moving between the stars.

The center explained that the asteroid had a brightness of 10.2, and this passage was the closest pass of the asteroid from Earth since it passed 89 years ago in 1933.

Scientific authorities are interested in following up the passage of asteroids from Earth, to ensure the accuracy of the calculations that indicate the danger of approaching asteroids, according to the Toronto scale.

The Toronto scale refers to the name of a Canadian city in which a large number of scientists met and set standards that combine the energy that can result from an asteroid collision with Earth, and the probability of the collision, and they agreed to represent this with numbers from zero to 10.

The number zero on this scale indicates that there is no possible chance of this happening, and the number 10 indicates a high probability of a serious collision that could cause an event similar to the one that occurred 66 million years ago, and caused the extinction of the dinosaurs.

The Center for Near-Earth Object Studies (CNEOS) of the US space agency, NASA, is the most active scientific body in providing information about the approach of asteroids, in support of the Agency’s Planetary Defense Coordination Office.

And the US agency had conducted a study of all the asteroids of the dangerous group, which are known to be dangerous on Earth.

She said that during the next 100 years, the chance of a collision with the Earth will be very difficult, and despite that, on November 23, they launched the spacecraft “rotated” into space, to target an asteroid 11 million kilometers from Earth, 10 months from now. , in an operation aimed at deviating its path, and the goal is to test the possibility of conducting a similar process in the future, to avoid any space objects from colliding with the planet Earth.

These were the details of the news From the sky of the Emirates.. Imaging the closest pass of... for this day. We hope that we have succeeded by giving you the full details and information. To follow all our news, you can subscribe to the alerts system or to one of our different systems to provide you with all that is new.