From “Blood and Tears” .. Scientists are developing concrete for construction... 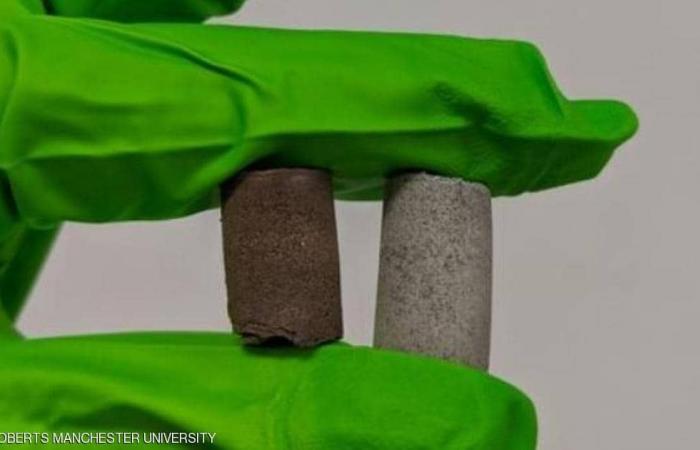 To address this challenge, scientists from University of Manchester In Britain, a concrete-like material is made from a mixture of “simulated regolith” from Mars or the Moon, a protein found in human blood, with another compound found in human urine, sweat and tears, according to the study, which was recently published in the journal Materials Today Bio.

Scientists say that this material is stronger than ordinary concrete, and will be suitable for construction work in extraterrestrial environments, such as MarsIf astronauts donate blood bags.

Experiments were conducted using regolith simulations of the Moon and Mars (which is the upper layer of dirt and debris on the surface of these worlds), which indicates that this regolith can be a valid building material, but it still needs a material capable of sticking it, this material replaced by the human body.

Scientists have found that a compound found in human urine called urea helps plasticize concrete, making it less brittle and more flexible, and ultimately resulting in a more solid material that can better withstand mechanical stresses.

The scientists revealed that a protein called albumin, found in human blood plasma, can bind concrete to each other using a simple manufacturing technique, as the team used human serum albumin to produce compounds of extraterrestrial regolith.

The addition of urea (present in tears) made the material more rigid, increasing the compressive strength up to 39.7 MPa.

Dr Ald Roberts, from the University of Manchester, who worked on the project, says the new technology has significant advantages over many other construction techniques proposed on the Moon and Mars.

“Scientists have been trying to develop viable techniques to produce concrete-like materials on Mars, but we never stopped thinking that the answer might be inside us all the time,” he added.

Scientists estimate that with a crew of six astronauts, more than 500 kilograms of high-strength astrocrete could be produced over the course of a two-year mission on Mars.

It is interesting in this discovery, as scientists say, that it relies on a mechanism that was used in the Middle Ages, when the blood of animals was mixed with “slurry” or building materials, as the process of “coagulation” of blood helped to bind these materials.

Here, Roberts says: “It is exciting that one of the great challenges of the space age was inspired by medieval technologies.”

The scientists investigated the basic bonding mechanism and found that blood proteins cleave, or “coagulate”, to form an extended structure with interactions known as “beta plates” that tightly hold the substance together.

These were the details of the news From “Blood and Tears” .. Scientists are developing concrete for construction... for this day. We hope that we have succeeded by giving you the full details and information. To follow all our news, you can subscribe to the alerts system or to one of our different systems to provide you with all that is new.