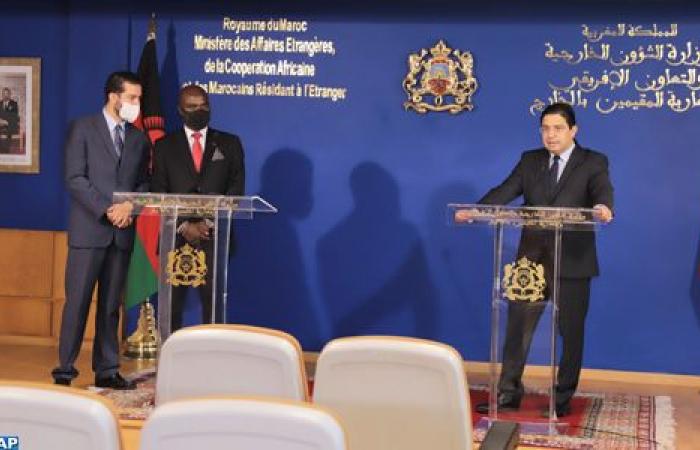 In a press briefing after the signing of these agreements, Mr. Bourita indicated that these are 4 “important” memorandums of understanding which strengthen bilateral relations and consolidate the legal framework of the partnership between Morocco and Malawi.

“We have established a roadmap of cooperation for the years to come”, notably with the increase in the number of scholarships granted to students from Malawi in Morocco, both in academic institutes and in vocational training centers, a- he noted, specifying that the number of these scholarships should rise to 100 per year.

Cooperation in the field of youth and sports was also mentioned as a priority area of ​​cooperation between the two countries, the Moroccan minister said.

There is a broad convergence of views between Morocco and Malawi on regional and international issues, stressed Mr. Bourita, reiterating “Morocco’s willingness, in accordance with the instructions of His Majesty King Mohammed VI, to accompany Malawi in this important phase of its history and to give all the support to the action of its president Mr. Lazarus Chakwera to strengthen the stability and development of the country ”.

For his part, Mr. Nduwa Mkaka said that “it is a great day” in the history of bilateral relations, noting that the two parties are giving birth to a new relationship oriented towards the future and based on mutual respect.

While thanking the Kingdom for this partnership, Mr. Nduwa Mkaka said he was confident that these agreements will be beneficial to both peoples.

*The article has been translated based on the content of Source link by http://www.mapexpress.ma/actualite/activite-gouvernementale/maroc-malawi-signature-quatre-accords-cooperation-couvrant-divers-domaines/
. If there is any problem regarding the content, copyright, please leave a report below the article. We will try to process as quickly as possible to protect the rights of the author. Thank you very much!

These were the details of the news Morocco-Malawi: Signature of four cooperation agreements covering various fields for this day. We hope that we have succeeded by giving you the full details and information. To follow all our news, you can subscribe to the alerts system or to one of our different systems to provide you with all that is new.