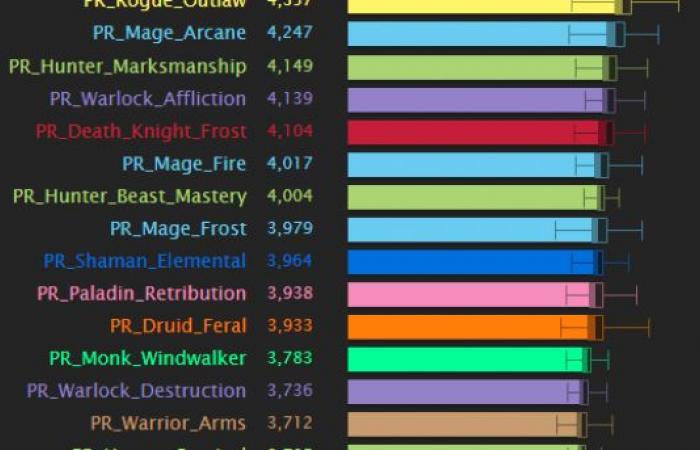 Despite the immense success of Mythic Plus dungeons, raids are still considered to be the greatest challenge in WoW. Whether this is due to the larger number of players, the high level of difficulty or the bigger bosses, you can argue about that. What is certain is that next Wednesday, December 9th, the gates of Nathria Castle will open and countless heroes will embark on the new raid in the days and weeks that follow. Of course, having fun comes first, but for most of them, success should not be left by the wayside. And to kill bosses, you need strong damage dealers. But which class has how much DpS and how important other factors are is an eternally controversial topic where there is no fundamentally right or wrong. Above all, of course, because a raid is a complicated thing and a lot of small things decide between victory and defeat.

Nevertheless, at least the pure DpS can be broken down into easily understandable numbers. A distinction has to be made between simulations and logs. The latter are numbers actually achieved in a raid, while the former is what would be possible in a perfect test environment. And since there are logically no logs from the raid (except from the test server, where there was hardly any class balancing), let’s take a look at the logs.
These were created by Simulationcraft and show what DpS values ​​the individual game styles could achieve if they were to beat a single boss for about five minutes. Movement, target changes or the like are completely ignored. That never happens in a raid, but the numbers can still give you a very good guide to what which spec could theoretically do. Still, it shouldn’t be given too much importance. Nevertheless, we want to take a look before we take a look at the real values ​​achieved in Schloss Nathria in the coming weeks.

The DpS values ​​achieved according to the simulation of the damage distributors looked as follows:

According to the simulations, the difference between the top and bottom is quite big. The Unholy Death Knight does 30 percent more damage than the Devastation Demon Hunter in theory. In practice it will look a little different. Because points such as mobility or survivability also have a passive effect on the damage dealt. In addition, no boss is permanently standing still in the raid and you also have to pay attention to other things.

Nevertheless, these numbers looked better in the past – in other words: closer together. It can therefore be assumed that we will also get some balancing adjustments this time after the first week in the new raid. At least, as long as the numbers in the real raid don’t develop in such a way that they automatically slide together due to the boss mechanics. As good as the start of Shadowlands has gone so far, we wouldn’t be surprised if the developers manage it well.

Supports buffed – it only takes a minute. Thank you!

All readers receive daily free news, articles, guides, videos and podcasts on World of Warcraft, Pokémon Go and other favorite games. So far we have financed this site through advertising and kept it as free of paid items as possible, but since COVID-19 this has become increasingly difficult. Many companies are cutting or cutting their advertising budgets for 2020. Budgets that we unfortunately have to rely on if we want to offer buffed free of charge as usual in the future.

For this reason we turn to you now. As a buffed supporter, you can support us so that we can continue to offer our content in the usual form for free, without introducing a paywall or publishing misleading news. Every contribution, large or small, is valuable. Supports buffed – it only takes a minute.

Read these interesting stories too PC

WoW Shadowlands: Which pact for which class? 11/23

WoW Shadowlands: Which pact should I choose for my class or specialization? Here are some suggestions for you. PC

WoW: In the week from December 9th there is a special variant of the PvP arena. Here all information about the event!

WoW: The bonus week for PvP battlefields begins on December 9th and invites you to a happy fight for experience points and badges of honor

These were the details of the news WoW: DpS in Shadowlands – that’s what Simulationcraft says for this day. We hope that we have succeeded by giving you the full details and information. To follow all our news, you can subscribe to the alerts system or to one of our different systems to provide you with all that is new.