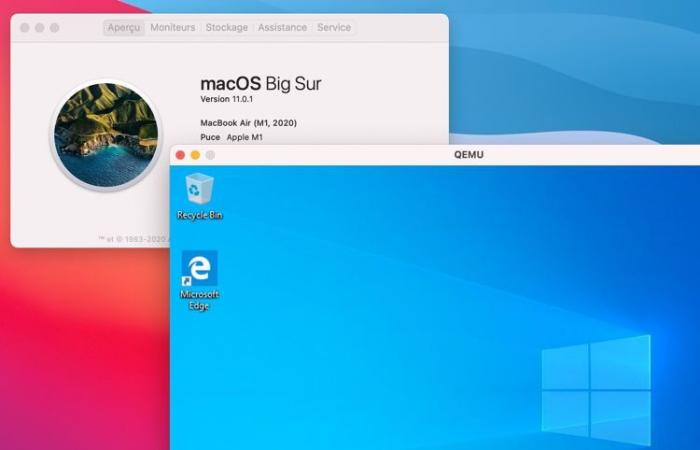 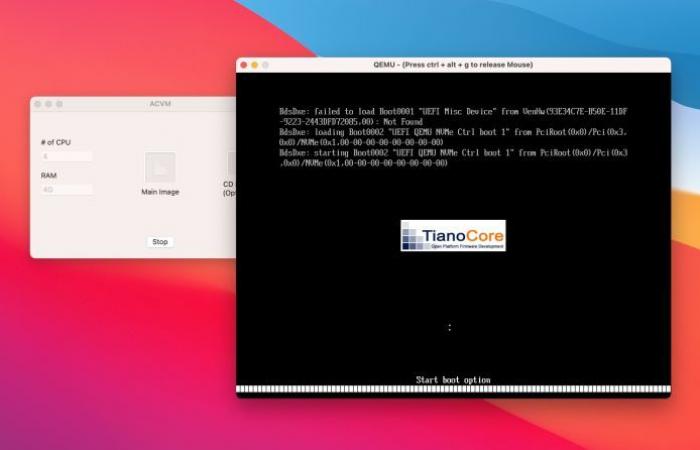 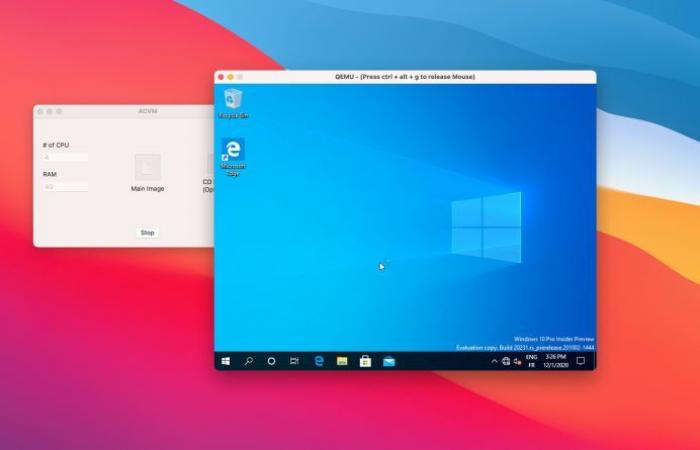 Craig Federighi said it, technically, nothing prevents running the ARM version of Windows on a Mac Apple Silicon. The community has taken him at his word and already offers hacks to take advantage of Microsoft’s system on a Mac M1. A full tutorial was posted yesterday so you too can post a photo of Windows 10 running on your new Mac on Twitter. Virtualization is based on the macOS hypervisor and a special version of the free software QEMU.

The guide involves installing Xcode, compiling QEMU, and typing various command lines. Too complicated to just play with Windows on a Mac M1? Developer Khaos Tian simplifies it all with ACVM, a small GUI app (actually a wrapper for QEMU) to upload to their GitHub profile.

After opening ACVM, we select the number of cores and the amount of RAM we allocate to the virtual machine, we drag the Windows ARM disk image onto the “Main Image” box, and click on “Start” . But wait, where can we find this Windows ARM disk image, Microsoft not selling this version? On the Microsoft site, of course, in the section dedicated to the Windows Insider program.

Microsoft provides its beta testers with a preview Windows 10 for ARM. This version is by nature experimental, and therefore not recommendable for everyday use, but for the hack in question, it does the trick. Signing up for the Windows Insider program is free.

Let’s go back to the mini-tutorial: once we have downloaded the preview of Windows ARM (a .VHDX file of more than 10 GB) and that it has been dragged to the “Main Image” box, just press “Start”. The Windows 10 virtual machine then starts up, with a few non-blocking error messages, and you can configure the system in a classic way. There you go, Windows 10 ARM on Mac Apple Silicon! You can use the various preinstalled applications, navigate the OS, etc.

However, one important thing is missing from this virtual machine, namely an internet connection. Despite several attempts by following this other tutorial, I have not succeeded in installing the essential network drivers, the virtual machine crashes when installing these drivers (this is the error KMODE_EXCEPTION_NOT_HANDLED which is listed and unresolved at this time), but others have succeeded.

Some GeekBench* scores, not yet tuned (like topology and whatever) about Windows on M1:
GB5 https://t.co/ifUGPnpTDI
GB4 aa64 https://t.co/jpCfcNlRRc
GB4 XtaJIT (x86) https://t.co/nfUImwJmz8

*: I don’t like GB for technical reasons, but the score is provided for curiosity

a score of 1,288 points in single-core and 5,449 points in multi-core (with the 8 allocated cores and 4 GB of RAM). Scores to compare with 1,730 and 7,500 points on macOS. In other words, there is a loss of power within the virtual machine, this is normal, but the performance remains very satisfactory … and even superior to that of a Surface Pro X, the Microsoft device which runs natively Windows ARM.

It should be remembered that this fairly easy to use hack arrives only two weeks after the release of the Mac M1. Thanks to the motivation and ingenuity of the community, we can expect more successful virtualization solutions quickly. What push Microsoft to market Windows ARM?

These were the details of the news Already an easy hack to run Windows 10 ARM on a Mac Apple Silicon for this day. We hope that we have succeeded by giving you the full details and information. To follow all our news, you can subscribe to the alerts system or to one of our different systems to provide you with all that is new.