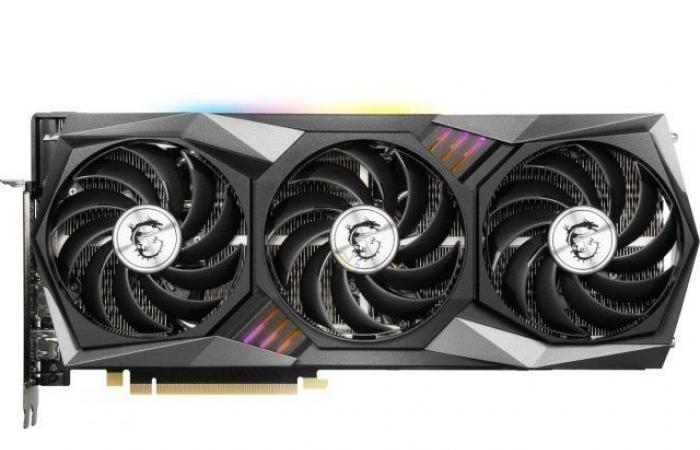 In the course of the day, the NDA for tests of Nvidia’s first ampere advance in the middle class, after the high-end segment with the Geforce RTX 3090, Geforce RTX 3080 and Geforce RTX 3070 was served. Tomorrow the starting shot for the Geforce RTX 3060 Ti will be given in stores. This includes numerous custom designs, some of which have already been spotted in online shops, forums and the wild in the past few days and weeks.

Most recently, three models from Nvidia board partner MSI have joined the line-up, which were briefly found in the catalog of the Swiss online retailer Digitec, including pictures and key data. Specifically, MSI is initially serving the RTX 3060 Ti in the versions Gaming X Trio, Ventus 3X OC and Ventus 2X OC. According to the listing and product series, you can already guess the respective price range in which the GPUs will move. While the Gaming X Trio appears as the most powerful custom model from the Taiwanese manufacturer, the Ventus 2X OC brings up the bottom of the line-up.

On the data sheet, however, it can initially keep up with the Ventus 3X OC. According to Digitec, both Geforce RTX 3060 Ti models work with the same clock rates, but the difference is the significantly narrower cooling solution of the Ventus 2X OC. As the name suggests, the Ventus 2X OC is equipped with only two fans, while the Ventus 3X OC has three fans. Accordingly, the thermal headroom for overclocking also logically decreases beyond the factory clock.

The latter is relatively sobering and the minimal increase in clock rate compared to the proposed boost reference value of 1.8 percent (1,695 MHz, +30 MHz) for the Ventus 2X OC and Ventus 3X OC is more likely to be used for marketing purposes. With the competition, however, it looks little different. Gigabyte also sets the limit for its own lower-priced OC custom models, according to Leak at that brand. At least in the case of the RTX 3060 Ti Ventus 3X OC, the Ventus models are powered by a single 8-pin power connector.

The same should probably also apply to the Ventus 2X OC, but the situation here is a bit uncertain. The photos of the Ventus 2X OC used by the dealer show two 8-pin power connections, which videocardz.com, who report on the custom models they saw, would be more than unusual in reality, since the power supply would then fall on the one that was actually higher up Ventus 3X OC including a better cooling solution looks sparse. It is therefore assumed that images from the RTX 3070 Ventus 2X were simply used as placeholders at that point.

In fact, the MSI Geforce RTX 3060 Ti Gaming X Trio will be equipped with two 8-pin power connections. And it is not only in this area that there is significantly more. Visually, the temporary MSI top-of-the-range model, the RTX 3060 Ti, is more obvious thanks to several RGB elements, while the custom cooling protrudes over two slots. The MSI Geforce RTX 3060 Ti Gaming X Trio is also much faster than its siblings from the Ventus series. At its peak, it works with up to 1,830 MHz, which is an increase of 9.9 percent compared to the reference values. According to videocardz.com, the rumor mill speaks of a recommended retail price of 470 US dollars for the MSI mid-range flagship. This would exceed the Nvidia MSRP by $ 70.

The Non-X variant, which will also be available in stores soon, is likely to be a bit cheaper. The only difference is the slightly lower clock rates of the MSI Geforce RTX 3060 Ti Gaming Trio.

PCGH Plus: A few milliseconds can distinguish between victory and defeat – at least in esports. “Reflex” is Nvidia’s new silver bullet against latency in games. The article comes from PC Games Hardware 12/2020.
more …

All readers receive daily free news, articles, guides, videos and podcasts about current game hardware and their favorite games. So far we have financed this site mainly through advertising, but since COVID-19 it has become increasingly difficult. Many companies are cutting or cutting their advertising budgets for 2020. Budgets that we unfortunately have to rely on if we want to continue to offer PC games hardware in the usual form free of charge.

Advertising: Discover the best graphics cards for gamers at Alternate

Shortly before the release of Nvidia’s Geforce RTX 3060 Ti, there is new benchmark data that is directly behind AMD’s Radeon RX 6800.

A leaker has shown the complete lineup of the manufacturer Gigabyte for the upcoming Geforce RTX 3060 Ti.

13:40
Nvidia Geforce RTX 3090 in the test: Founders Edition and Zotac Trinity in the video

These were the details of the news Three custom models from MSI including key data viewed for this day. We hope that we have succeeded by giving you the full details and information. To follow all our news, you can subscribe to the alerts system or to one of our different systems to provide you with all that is new.