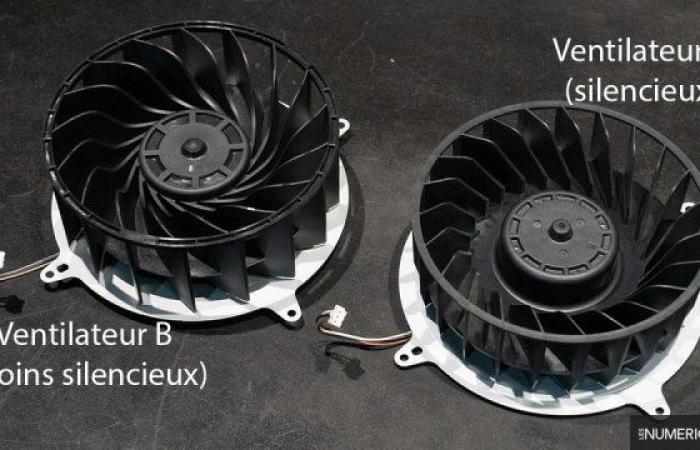 Compared to the start of the penultimate console generation at the end of 2013, the current consoles also focus on completely different topics than just gaming performance. Back then it was about the difference in performance between Xbox One and PS4, their online features and, at least with Microsoft, TV, TV, TV. Leap into the year 2020: Today, the actual gaming performance feels like a sideline. Above all, the volume and temperature development receive a lot of attention from many testers and players.

While the Xbox Series X does particularly well in these disciplines, the Playstation 5 is also considered pleasantly quiet and cool. But as more and more tests on the console appeared and joined the opinions of consumers, the attentive observer noticed that there were different statements and measurements about the fan performance of the PS5.

By unscrewing its own model and comparing it with other unboxing videos – including the official Sony video – the French magazine Les Numeriques found out that the Japanese company apparently uses different fans that differ in terms of the number and shape of the fan blades. This decision on the part of Sony ensures that the volume of the console after some playing time is only 39 dB for some copies, while it is at least 43 dB for others.

What looks like a tiny difference at first glance can make an audible difference, especially for sensitive ears. Customers also have no way of finding out which fan model was installed when purchasing the console. If you want to be clear about this, you have to remove one of the two side wings to have a look at the fan.

Buy PS5 and Xbox Series X: Microsoft is considering another way of publishing due to delivery problems

In an interview, Xbox boss Phils Spencer speaks about how the delivery bottlenecks for Playstation 5 and Xbox Series X could be cushioned in the future.

New benchmark tests of the PlayStation 5 and Xbox Series X show which of the two next-gen consoles has the edge in terms of performance.

Ubisoft claims to have closed bugs and added optimizations for DirectX 12 to Watch Dogs Legion in patch 2.20.

Antialiasing modes at a glance: Fight against pixel crawling

PCGH Plus: Anti-aliasing in games is old hat. But even if technologies have existed for decades, they are subject to change over time. The article comes from PC Games Hardware 03/2018.
more …

Back 1
2 Volume of the PS5: Sony installs different fan models

These were the details of the news Volume of the PS5: Sony installs different fan models for this day. We hope that we have succeeded by giving you the full details and information. To follow all our news, you can subscribe to the alerts system or to one of our different systems to provide you with all that is new.