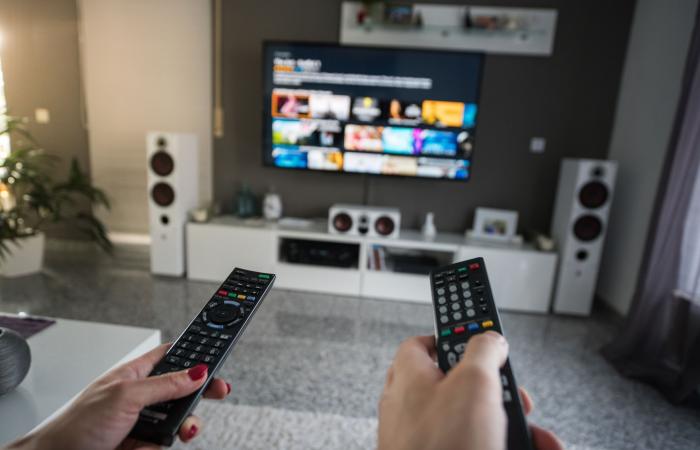 Are you looking for a new and affordable television? Then the Black Friday week should be the best time for it. Retailers such as Amazon, Media Markt and Saturn are reducing their television sets particularly sharply during this period. TECHBOOK will find the best bargains for you in terms of quality and price.

Inexpensive televisions are of top quality

The times when a good television set had to cost 2,000 euros are long gone. There are now devices for a few hundred euros on which you can not only watch TV properly, but also use all the important smart functions. It is very clear that expensive OLED TVs can of course deliver an even better picture. The question that every user has to ask is: Do I really need the best possible picture or is a good to very good one enough for me? If you are not exactly an absolute cineast or plan to get the last percent of power out of your upcoming next-gen console, you will usually do better with a cheap television.

The selected devices have everything that is currently expected from a television. In addition to the ultra-sharp 4K UHD resolution, they are all equipped with smart functions. Netflix, Amazon Prime, Sky and other streaming services can therefore be watched directly on the device.

The Medion television from Aldi with a screen diagonal of 55 inches comes at a top price. Smart functions, Netflix and Amazon Prime Video apps and a media portal are just as much a part of it as ND Triple Tuner and HDR image. All in all, a highly functional entry-level model in the 55-inch range at an absolute competitive price. The only downer: First of all, only Aldi Süd customers can enjoy it. The device will be in stores tomorrow.

The Sony KD-XH8096 Bravia is available at Amazon within the Black Friday week in five sizes cheaper – 43, 49, 55, 65 and 75 inches. The television runs on Android TV – one of the best currently available smart TV systems that promises a high level of app support. It has been available since the end of March 2020. This model is also a 4K TV with LCD. When it comes to connections, users have a little more choice. For example, there are four instead of three HDMI connections, Bluetooth and AirPlay 2 are also supported by the television. Sony also advertises compatibility with the PS4. The sound, however, is not outstanding. It is therefore advisable to couple an external music system or a soundbar. But the picture convinces with rich colors and good contrasts. Owners of the Sony KD-XH8096 Bravia can even record TV programs if they wish.

The prices on Amazon are between 478 euros and 999 euros, depending on the size. The popular 55-inch size currently costs 555 euros and thus 94 euros less than the next cheapest offer on the Internet.

With the GU-TU8509, Samsung offers a television with particularly narrow bezels that is very cheap on Black Friday. The 55-inch device displays in 4K and, thanks to HDR10 and Dynamic Crystal Color, offers a high-contrast and colorful image for an LCD television. For the Smart TV function, Samsung uses Tizen with its own surface. This gives users access to common streaming services, for example. The TV signal is fed in via a triple tuner. The Samsung television offers automatic format adjustment, an integrated media player and, if desired, child safety. It can also be controlled by voice via Amazon Alexa or Samsung’s Bixby. The television has three HDMI inputs, two USB ports and a digital and cinch output. There is also support for Bluetooth and WLAN.

If you include the shipping costs, the Samsung GU-TU8509 normally costs from 628.84 euros. MediMax offers it for Black Friday for 486.42 euros if buyers take it with them directly in one of the Germany-wide branches. When shipping, another 29.95 euros are added.

This Grundig television has a 50-inch 4K UHD screen and, thanks to HDR HLG, displays images with a high level of contrast. The “Fire OS” operating system, which was developed by Amazons, runs on the Smart TV. Accordingly, the television also has access to the voice assistant, which can also be controlled with the supplied voice remote control. You can access the Internet with the device via a WLAN connection or Ethernet connection. There are numerous connections available, including three HDMI and two USB ports, but users have to do without Bluetooth. The television has an integrated triple tuner and is comparatively energy-efficient.

Outside the Black Friday week, retailers asked for the Grundig 50 GUB 7022 around 358 euros. It is currently available for 289.52. That makes a saving of 19 percent.

The Samsung TU7079 television celebrated its premiere in April 2020. The 55-inch device is currently 389 euros, even below the 400 euros mark. 4K UHD and Edge LED lighting ensure a high-quality, sharp picture on the TV. Full streaming fun is guaranteed with Amazon, Netflix and YouTube, Maxdome, ARD, DAZN and Co. The Samsung TU7079 is also a good entry-level model for avid gamers, which does not burden the wallet beyond measure. In addition, the TV is compatible with Alexa and Samsung’s own Bixby voice assistant. The device also has a Bluetooth module and is equipped with the in-house Smart TV Tizen system. Only the connections are somewhat limited: two HDMI and only one USB port are available in addition to the common CI + slot, the digital and the antenna connection.

The price at Saturn is currently very cheap. The Samsung television costs 388.95 euros here. An additional EUR 29.90 is charged if buyers want the device to be delivered. If we include the delivery, this results in a price of 418.85 euros, which Amazon also charges for the device.

The Hisense A7100F is also one of the very current models with its market entry in April 2020. Users currently have to pay just 333 euros for the 58-inch television. Hisense is one of the largest television manufacturers alongside Samsung and LG and has equipped its 2020 model with a slim housing as well as 4K and HDR10 +. The television has a total of three HDMI ports, two USB interfaces, an optical digital output as well as Ethernet, WLAN and Bluetooth. Hisense has also integrated a triple tuner. Instead of Android TV or webOS, however, the Chinese manufacturer relies on its in-house operating system called VIDAA U. The app selection is therefore somewhat more specific than with the standard systems. The Hisense A7100F still supports apps such as Netflix, YouTube, Amazon Video and Co. While the image on the LCD panel is convincing, the smart TV has a bit of a problem with sound output. Voices can be clearly recognized, but the sound lacks the depth of space that it needs for a real cinema feeling. Here, users should ideally retrofit external speakers or a soundbar.

The KD-49XG9005 proves that it doesn’t always have to be a giant TV. If you don’t have that much space or prefer to live a bit minimalistically, you will get a 49-inch TV with premium equipment here. The TV has Sony’s X1 Extreme image processor and runs on Android TV. Version 8 is installed ex works, an update to Android TV 9 is available. The system can be individually expanded with apps for popular streaming services, games and more. The LED backlit screen offers excellent colors and clarity thanks to 4K resolution. Moving images are very fluid thanks to Sony’s “X-Motion Clarity” and still razor sharp.

May it be something more? Then you will find the latest top TVs for Black Friday here.

Which TV manufacturers have affordable devices on offer?

Many manufacturers play in the lower price segment. Some produce devices specifically for this purpose, others offer older models at a lower price. The differences are often less in the technology than in the appearance and the user interface. Here you can be guided by personal preferences. Examples of manufacturers who also offer affordable televisions of decent quality are:

Also interesting: you have to be quick with Black Friday bargains

What TECHBOOK pays attention to when selecting offers

When choosing a bargain, the editorial team pays attention to whether it is really a good discount. Often the specified before prices are only the recommended retail price. This is then often well above the real price for which the television is currently available in stores. In this way, a higher discount can be faked. TECHBOOK checks on price comparison sites and other sources whether the previous price is right and whether the device has ever been cheaper in the past. Only the best bargains land in our selection!

These were the details of the news Aldi is sending 55-inch TV into the race on Black Friday... for this day. We hope that we have succeeded by giving you the full details and information. To follow all our news, you can subscribe to the alerts system or to one of our different systems to provide you with all that is new.