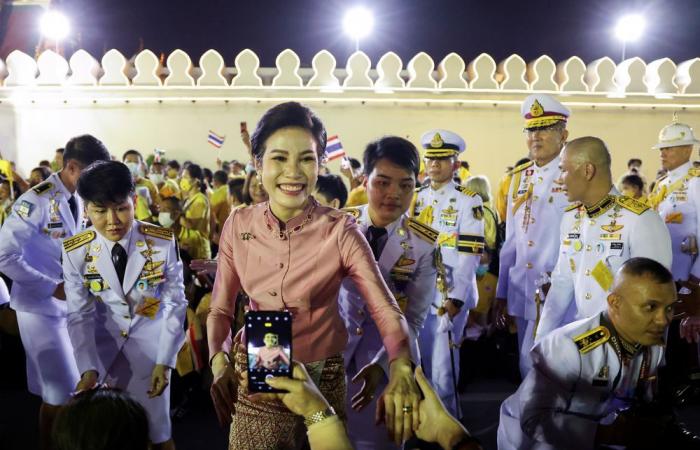 In Thailand, normality has served for months – years, even – as a synonym for scandal, always orbiting around the figure of its controversial monarch, Maha Vajiralongkorn. The latest incident is the leak of intimate images of the royal consort, Sineenat Wongvajirapakdi, the result of the hidden battle for power between the factions of the court.

The biography of the victim shows the debauchery that reigns in the Palace, where decorum belongs to another time. In August 2019 the king, just a month after his wedding to Queen Suthida, made her the first concubine in nearly half a century. Sineenat had joined the national security apparatus years before, after starting a romantic relationship with Vajiralongkorn, performing the functions of security guard, pilot and paratrooper before being appointed general by himself; a trajectory very similar to that of his adversary due to the affections of the head of state.

Just two months after the ceremony, Sineenat was repudiated and stripped of her titles on charges of “disloyalty” and “disobedience.” The details of what happened are unknown, beyond the text published in the official Thai government gazette. “The royal consort is ungrateful and behaves improperly. She is also not satisfied with the title that has been awarded to her, doing everything possible to rise to the height of the queen.

The penultimate twist came at the end of October this year, when Sineenat left the Bangkok prison where she had been held for months. A day later he was already taking to the skies to Germany, with his titles restored without explanation, to join Vajiralongkorn in the Bavarian hotel that he occupies entirely with his entourage and where he usually resides.

The revelation of these images shows that the battle is not over. Some came to light on the Facebook page of Pavin Chachavalpongpun, a Thai dissident living in Kyoto. The British journalist Andrew MacGregor Marshall, who https://twitter.com/zenjournalist/status/1330561551145852933?s=20 He narrated how last August he received “a mysterious SD card with 1,443 photographs that had been extracted from 3 Koi iPhones [apodo de Sineenat]”.

“Many of the images are photos she took of herself and dozens of them are sexually explicit,” she continued. This shipment, made from a false address, took place shortly after Sineenat’s release, “bitterly opposed by some factions of the Palace favorable to Queen Suthida”, for which the journalist considered that the maneuver could have entailed ” an effort to sabotage her return as consort. “

It is not the first time that intimate photographs have been used as ammunition in the surroundings of Vajiralongkorn. When in 1996 he disowned his second wife, Yuvathida Polpraserth, images of him were sent to embassies and various media. In 2007 the protagonist was his third wife, Srirasmi, after the appearance of a domestic video in which she looked naked during the monarch’s birthday party.

Photographs of the current queen were also leaked a few years ago, as well as the king’s niece, Ploypailin Jensen. What happened “reflects that there is an ugly power struggle in the Palace due to Vajiralongkorn’s complicated sex life, and the civil war is likely to get progressively worse as Suthida and Koi compete for status and attention,” MacGregor said. When it comes to the king of Thailand, the strange thing would be if nothing happened.

*The article has been translated based on the content of Source link by https://elpais.com/gente/2020-11-24/ultimo-escandalo-en-la-corte-de-tailandia-difunden-fotos-intimas-de-la-consorte-real.html
. If there is any problem regarding the content, copyright, please leave a report below the article. We will try to process as quickly as possible to protect the rights of the author. Thank you very much!

These were the details of the news Latest scandal in the court of Thailand: they spread intimate photos of the royal consort | People for this day. We hope that we have succeeded by giving you the full details and information. To follow all our news, you can subscribe to the alerts system or to one of our different systems to provide you with all that is new.