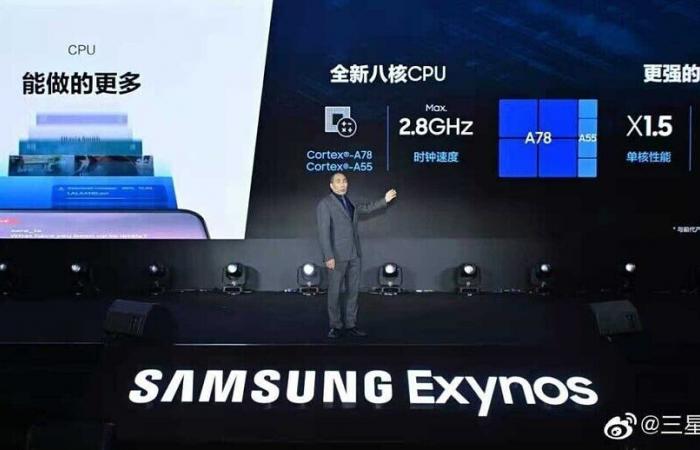 Samsung’s Exynos chipsets have lagged behind their counterparts for several generations. While this applies to SoCs in various price ranges, news about Samsung’s flagship processors, which lag behind their competitors from the Qualcomm camp, has caught the most resonance. The Exynos 990 from earlier this year was also overwhelmed by the Snapdragon 865, but Samsung has been trying to change that dynamic. At an event in China today, Samsung’s semiconductor division announced the Exynos 1080, which powers the next generation of high-end Samsung smartphones.

The Samsung Exynos 1080 SoC has an octa-core CPU design in a 1 + 3 + 4 configuration. It is made using a 5nm EUV-based FinFET process that is expected to make the chips 25% smaller and 20% more energy efficient than the 7nm EUV process used to make the Exynos 990.

For the past five years, Samsung has been using its custom Exynos M cores which couldn’t compete with ARM’s Cortex-A cores. This resulted in the Korean giant eventually abandoning its special research program and dropping its plans to develop the Exynos M6 core. Instead, they decided to rely entirely on ARM’s Cortex cores for the Exynos 1080.

The new CPU configuration will likely put the Exynos 1080 on par with its Qualcomm and Huawei counterparts. Samsung claims that the new chipset has a 50% increase in single-core performance and a 100% improvement in multi-core performance compared to the Exynos 990.

In addition to the modern CPU design, the Exynos 1080 also has a Mali-G78 MP10 GPU. According to Samsung, the new GPU offers 2.3 times (130% higher) performance compared to the Mali-G77 MP11 GPU of the Exynos 990. In addition, the Exynos 1080 is equipped with a neural processing unit (NPU) for prediction tasks, preloading of Apps and other AI applications as well as an AI-powered ISP for enhanced photography and videography.

The Exynos 1080 supports up to six cameras with a maximum resolution of 200 MP. The processor also enables 10-bit 4K video recording for greater vibrancy, as well as the ability to edit HDR 10+ videos on the smartphone itself.

In terms of connectivity, the Exynos 1080 supports Wi-Fi 6 and Bluetooth 5.2. When it comes to 5G, the chipset supports frequencies below 6 GHz as well as mmWave with maximum download speeds of up to 5.1 Gbit / s and 3.7 Gbit / s, respectively.

Finally, the Exynos 1080 overcomes the limitations of the Exynos 990 with a refresh rate at higher resolutions. It supports WQHD + displays with a refresh rate of 90 Hz compared to 60 Hz for the latter and a refresh rate of up to 144 Hz for Full HD + resolution. This leaves room for speculation that Samsung may be working on the rumored Exynos 2100, which will likely support 120Hz WQHD + displays to scroll really smoothly on its 2021 flagships. The speculation has not yet been confirmed so please take it with a pinch of salt.

Vivo is partnering with Samsung for Exynos 1080

As previously reported, Vivo has teamed up with Samsung to source the Exynos 1080 chips for its smartphones. Earlier this year, Samsung supplied Exynos 980 and 880 to Vivo to help them get closer to rival mobile semiconductor manufacturers like Huawei. The previous report also suggested that Xiaomi and OPPO could become potential consumers of Exynos 1080 too, but that hasn’t been announced yet.

Earlier schedules suggest that Exynos 1080 smartphones will hit the market in early 2021. We’ll have to wait and see if Vivo will provide SKUs before Samsung launches the Unpacked 2021 event in mid-January, which will announce the Galaxy S21 series.

These were the details of the news Samsung Exynos 1080 with Cortex A78 CPU, Mali G78 GPU announced for this day. We hope that we have succeeded by giving you the full details and information. To follow all our news, you can subscribe to the alerts system or to one of our different systems to provide you with all that is new.