Crash Bandicoot 4 composer about making music for the legendary franchise 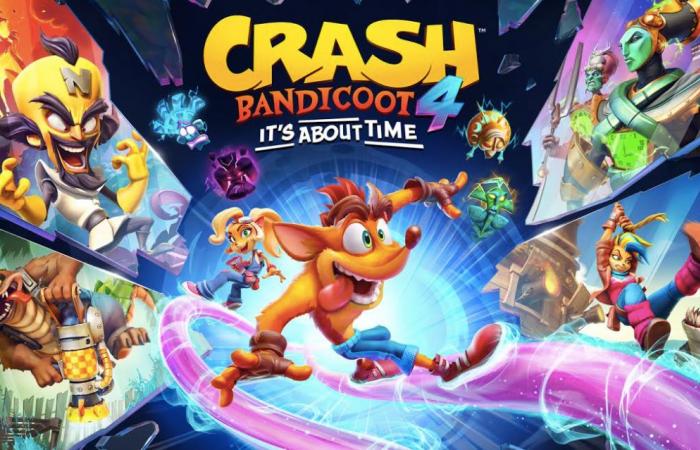 After working on the soundtracks for mega franchises like Grand Theft Auto, Killzone, Total War and Splinter Cell, composer Walter Mair was brought in to write new music for Activision’s Crash Bandicoot 4: It’s About Time. The music in Crash 4 does a good job of staying true to the origins of the franchise – you’ll hear lots of marimbas and percussion instruments – while also updating the music for a more modern feel. We recently spoke to Mair about a number of other topics related to the music of Crash 4.

In our interview, Mair talks about how he was tied to Crash 4 in the first place, how much access he had to the development team and what the collaboration process with Toys For Bob was like and the varied instrumentation with which he achieved the game.

Mair composed unique music for every setting and character, and he went to some interesting places to find the right sounds for each. For Dingodile, Mair used an awkwardly played tuba and double bass to describe the character, while Mair used electric guitars and bass guitars through massive stacks of guitar amps and a drum kit to create the music for the N.Gin boss fight.

Mair also shared that he used primitive instruments like the bone flute and fur drums for the prehistoric levels of Crash 4, and you can hear some of them in the videos embedded in this story.

After Crash 4 went unavailable for about a month, Mair pondered the reaction to the game and music which was generally positive. “The fans enjoyed how the music was composed to be more dynamic and to reflect the unique worlds and different sections of gameplay within the levels,” said Mair. “The off-beat carnival level was an outstanding musical experience for many.”

Mair also said that people shared their own covers of songs, including full-on-metal tracks. “There is absolutely brilliant material online and I love every single piece of it! This is a great honor and exactly what this amazing franchise deserves – to live on and see the many interpretations of the music, ”said Mair.

You can read our full interview below.

How did you get into Crash 4 in the first place?

As a huge fan of the franchise, I was over the moon when I heard from the Toys For Bob studio that I had been invited to audition for Crash Bandicoot 4: It’s About Time. The next phase was critical and so I locked myself in my recording studio developing new sounds and instrument combinations to create a quirky sounding world that would suit this new crash adventure.

How much access did you have to the Crash 4 development team and how was the collaboration process?

I was given access to the title at an early stage of development. I had the pleasure of meeting the Toys For Bob team in their San Francisco studio. Each subteam provided me with updates on their latest development so I could see firsthand what the animations would look like, what objects and colors the level design would be, and what characters the studio would introduce or bring back to this exciting new experience.

From then on I was in regular contact with the studio and the audio team. Toys For Bob wanted the player to have a nicer, more dynamic music experience, so there was a lot of back-and-forth motion with the audio team to dial in what worked for each level and gameplay area. Threading the needle, being inventive and fresh while staying true to the established crash musical tone can be a challenging goal, and the team has provided great feedback – sometimes we went a little too far and then rewound it. There was a lot so we created a helpful system for tracking music progress and sharing notes and assets. Toys For Bob and Beenox audio teams also helped remix music, including remixes in N.Verted mode. It’s been great to work with people who are so interested in music and bring their own musical skills to the creative process.

On a higher level, can you talk about the challenges of staying true to the roots of the series while making your own mark on it?

The folks at Toys For Bob were absolutely amazing as they gave me the free hand to research and experiment with different instruments and ideas while staying true to the keynote and feel of crash music. First we tried different approaches – recording instruments live and mainly using synthesizers and electronic instruments. For Crash 4 we wanted to take the soundtrack to the next level, so I went for a hybrid approach where we recorded most of the instruments live and then tweaked them with analog and digital effects. A recorded saxophone would result in a quirky synth sound that still contains the shortness of breath that you would hear in a real saxophone performance. I also experimented with synthesizers and built in my modular synthesizer rig, which was responsible for many of Cortex’s textures and sounds.

To tie the music in with previous tracks and add a bonus for the fans who have played the franchise for decades, I’ve also brought back some of the longstanding themes. I also included the heavy use of marimbas, memorable melodies and playful compositions to anchor the music as a crash experience while at the same time taking it to new terrain through more sound shaping and instrumentation to represent the unique locations.

While I was composing a new main theme for Crash 4, you’ll notice a hint of earlier themes in some cutscenes. For example, when Cortex walks on the screen and we hear a synth-laden rendition of his subject, which is then abruptly interrupted when Tawna takes the stage and her new subject comes in.

Crash’s adventures in the new game take place in a variety of different locations – what instrumentation did you use to capture this?

It was so much fun that every setting and character got their own music. I recorded a brass band with guitars and drums for Dingodile. A clumsily played tuba and a double bass describe the character that Crash helps in the game.

The music for the first boss fight against N. Gin was something very special – I was given the task of writing music for a giant robot that plays gigantic drums behind massive amplifiers that fire large sound waves at the beat of the crash music. The music had to capture the mood of the scene and be brave, daring and … epic! So I recorded electric guitars and basses running through huge stacks of guitar amps and a large drum kit that was accompanied by fast synth movements. We also slipped into N. Gin’s original music to connect with the franchise story.

For the levels set in Wasteland, I wanted to record raw and “heavy” sounds. Equipped with field clerks, I took a recording team to a quarry, where we smashed stones and metal objects with sledgehammers and large wrenches. These sounds were then treated with effects and became the backbone of a drum beat or a massive stomping effect.

The prehistoric levels received their own unique soundscape by recording primitive instruments like the bone flute or fur drums. These sounds, combined with orchestral colors and the fast crash-style marimba runs, give the score a unique sound that is equally at home in the crash universe. We’ve also juxtaposed the playful crash music with a prehistoric theme to the super-epic, cinematic chase on the Dino Dash level. This is a good example of times when we stylistically broke new ground in music.

Percussion instruments are a big part of the Crash series – what did you do to make sure you really nail this essential part of the franchise?

Absolutely, percussion is a great element to speed up the pace and add an element of forward momentum to get the player through the level. I recorded a very wide range of drums. From the simpler handcrafted instruments for the prehistoric levels to industrial sounds recorded in a quarry to improve the wasteland levels. The score also regularly uses full drum sets and electronic drums. The drums used for the city levels, in particular, offer that old-school 80s vibe that goes so well with the retro sounds of synthesizers that accompany the beat elements. There are also levels where more than one drum kit is played at the same time and we weave and weave electronic and real drums in and out for added craziness if we really want to change the sound.

What do you hear from fans about the music after Crash 4 was out a bit?

Rarely have I seen the kind of support shown by the amazing fans of Crash. I got tons of messages from fans every day complimenting the music. Fans enjoyed how the music was composed to be more dynamic and to reflect the unique worlds as well as different sections of the gameplay within the levels. The off-beat level “Carnival” was an outstanding musical experience for many. The entire level – platforms, obstacles, ghost musicians, playable instruments – was synchronized with the beat, creating a synergy between music and gameplay. And, of course, they loved hearing nods to established franchise music themes.

Many even send me cover versions of the themes and level music. They interpret the melodies very differently and produce full metal tracks with videos that you can find on YouTube. There is absolutely brilliant material online and I love every single piece of it! This is a great honor and exactly what this amazing franchise deserves – to live on and see the many interpretations of the music.

These were the details of the news Crash Bandicoot 4 composer about making music for the legendary franchise for this day. We hope that we have succeeded by giving you the full details and information. To follow all our news, you can subscribe to the alerts system or to one of our different systems to provide you with all that is new.