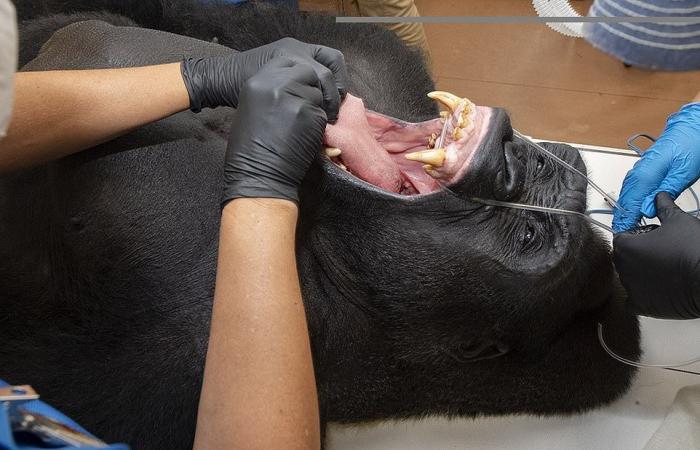 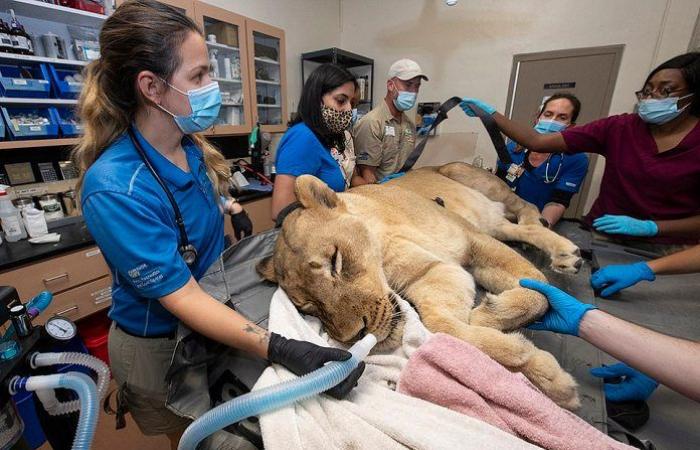 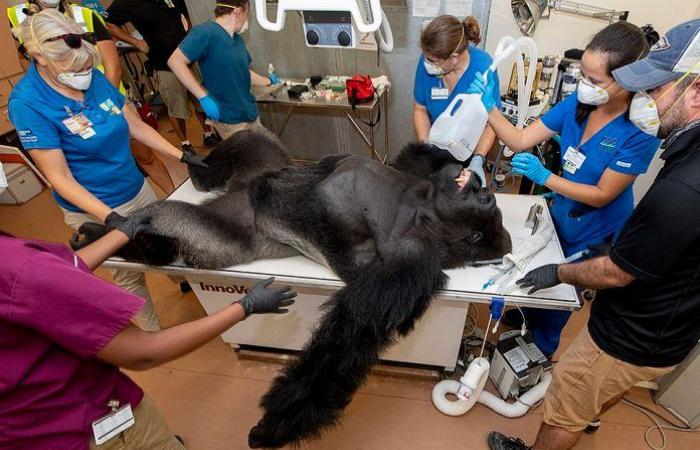 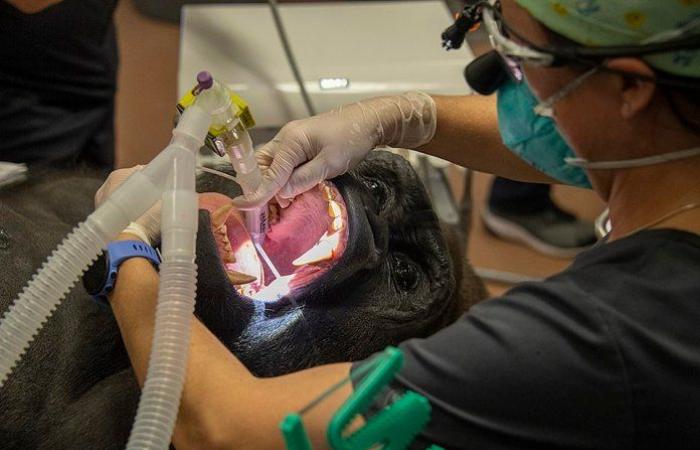 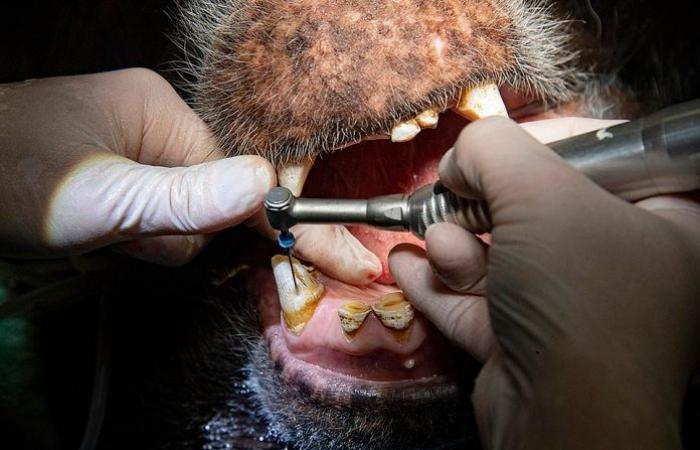 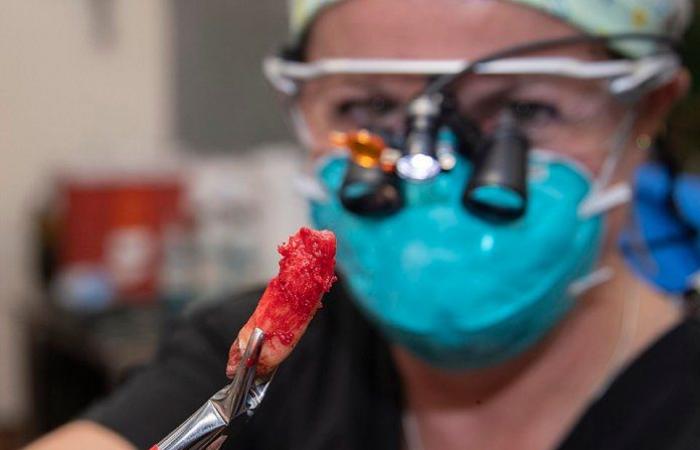 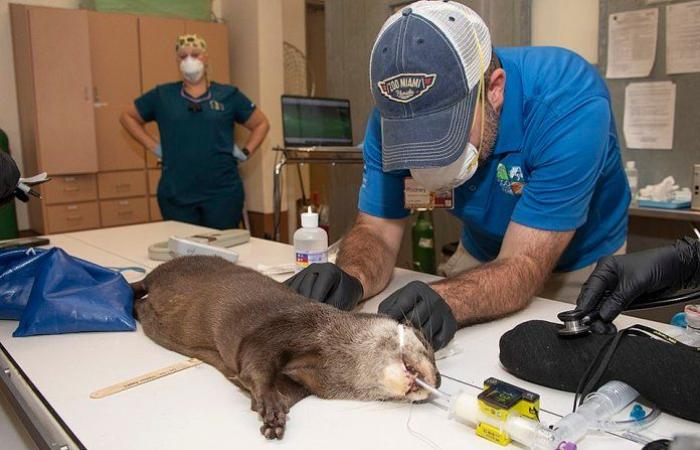 Dental health is just as important to animals as it is to humans.

This week, the furry residents of Miami-Dade Zoological Park and Gardens, also known as Miami Zoo, went to the dentist.

Various interventions were performed during the tooth week, from cleaning to root canals. Patients included a lion, gorilla, chimpanzee, tapir, aardvark, and otter.

The most common problem was removing accumulated tarter as well as cracked or broken teeth that needed repair or extraction.

All animals were fully sedated for both their comfort and the safety of the dentist.

Barney, a 27-year-old gorilla, has a tooth extracted during Dental Week at Miami Zoo

“We have never woken up an animal during a procedure,” said Zoo Ambassador Ron Magill. “You will be carefully monitored by an anesthesia team. If they show signs of awakening, they will be given extra anesthesia to calm them down completely. “

Since animals generally do not complain of toothache, veterinarians often refer to this as “silent suffering”.

If something is discovered, the disease or infection can be so advanced that it is debilitating or even fatal. 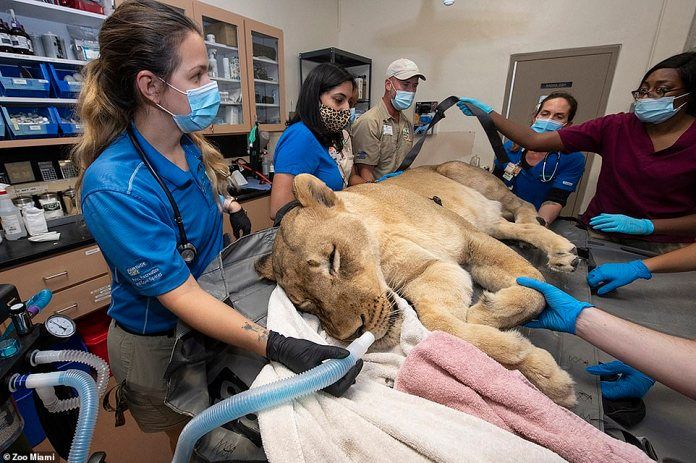 Kashifa, a 10-year-old lioness, was well sedated before her tooth was extracted. “We have never had an animal wake up during a procedure,” said Zoo Ambassador Ron Magill Sedation lasts about three to eight hours, the dosage depending on the size and age of the animal

If a problem is diagnosed, the zoo’s vets will either resolve it themselves or, depending on the severity, see a veterinary dentist.

“Dental health is a key component of the Animal Health Department’s prevention program at Miami Zoo,” said Magill, who took photos of the unusual occurrences. “A variety of problems, ranging from gum disease to broken teeth, can lead to critical care issues that can lead to serious infections and even death without treatment.” Veterinary dentist Jamie Berning and her veterinary technician Jill Bates traveled from Columbus, Ohio to Miami to perform procedures on a variety of animals 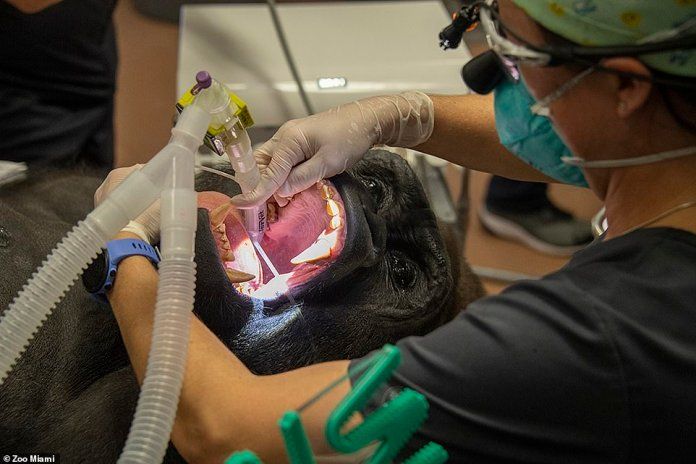 The most common problem was removing accumulated tarter, cracked or broken teeth that needed repair or extraction

This week, veterinary dentist Jamie Berning and her veterinary technician Jill Bates traveled from Columbus, Ohio to Miami to perform procedures on a variety of animals.

Barney, the zoo’s 27-year-old gorilla, Hondo, a 26-year-old chimpanzee, and Kashifa, a 10-year-old lioness, all had their teeth pulled.

The procedures, which lasted between two and seven hours, were spread over three days.

Sedation lasts about three to eight hours, the dosage depending on the size and age of the animal.

Dr. Berning was able to treat two to three animals a day. 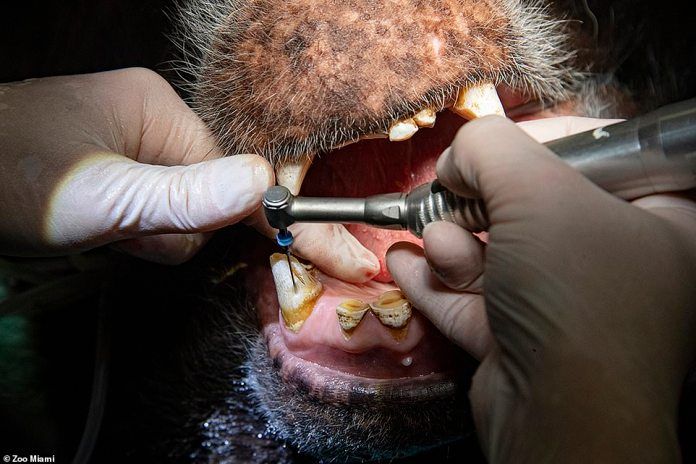 Hondo, a 26-year-old chimpanzee, also had a tooth pulled 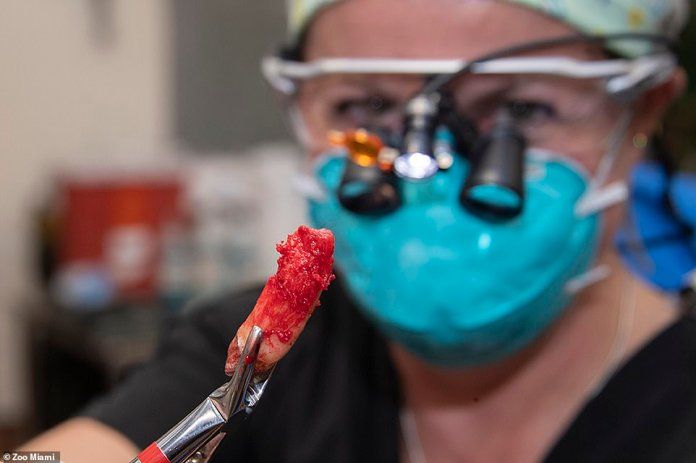 Dr. Berning holds up the tooth she removed from Hondo

According to Magill, all patients have returned to their living spaces, “certainly much more comfortable after the exceptional care they received”.

The Miami-Dade Zoological Park and Gardens opened in 1948 and is the largest zoo in Florida.

The only subtropical zoo in the continental United States is home to more than 3,000 animals in nearly 750 acres.

Earlier this month, an elephant at the Miami Zoo received much-needed medical attention. 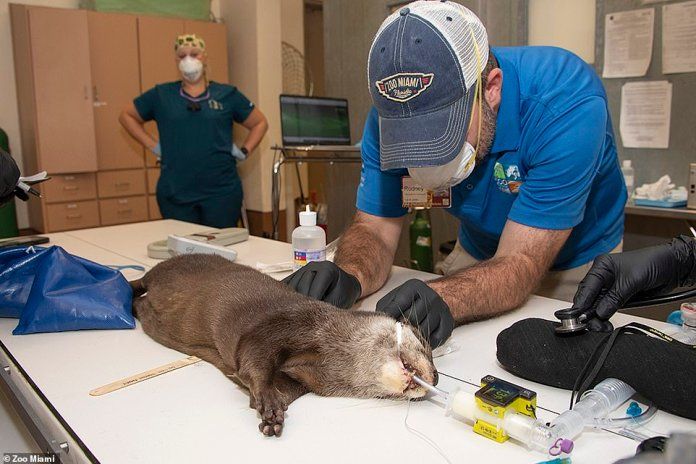 An otter receives a dental exam during Dental Week at Miami Zoo. Other patients were a tapir and an aardvark

Doctors at the zoo examined Ongard, a 10-year-old Asian elephant who injured his tusk while exploring its habitat.

Ongard volunteered to check out his tusk, according to WSVN News 7, and was “very cooperative” during the process.

It came to the zoo from a zoo in Melbourne, Australia in 2018.

These were the details of the news The Miami Zoo-based dentist pulls a gorilla tooth and completely cleans... for this day. We hope that we have succeeded by giving you the full details and information. To follow all our news, you can subscribe to the alerts system or to one of our different systems to provide you with all that is new.