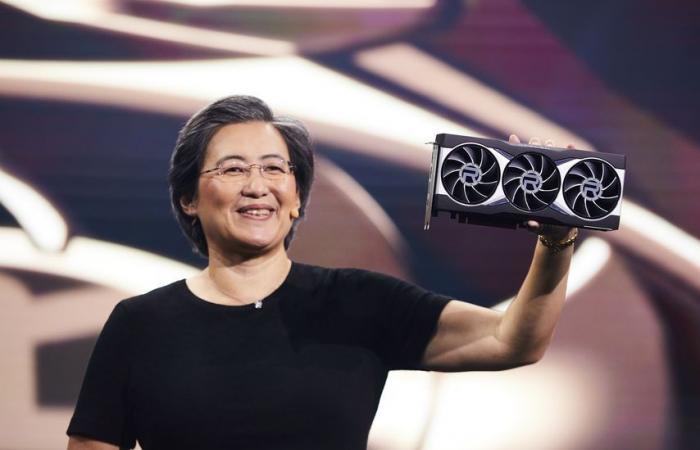 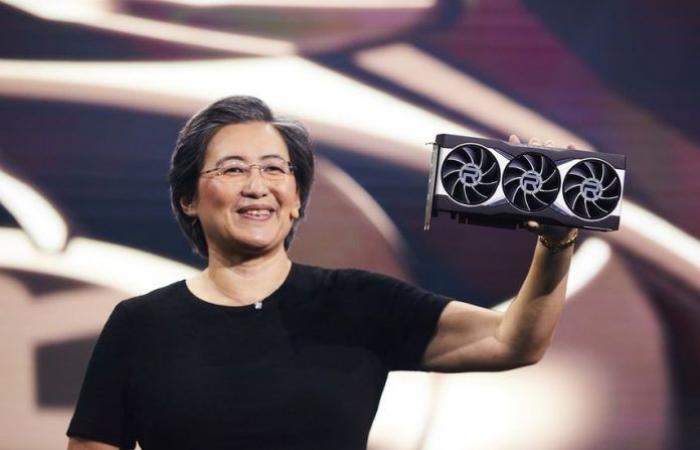 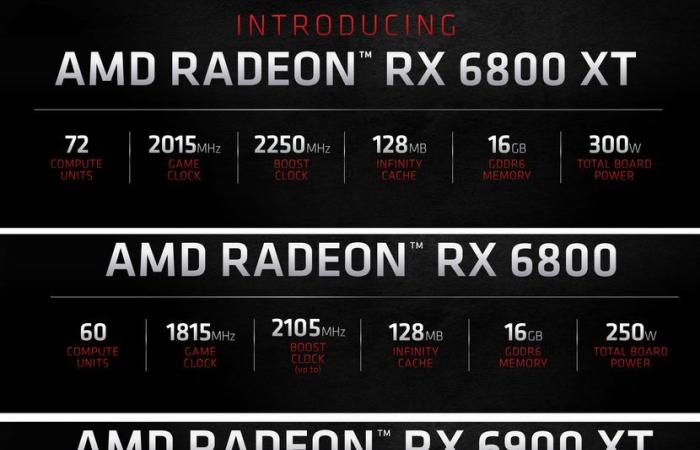 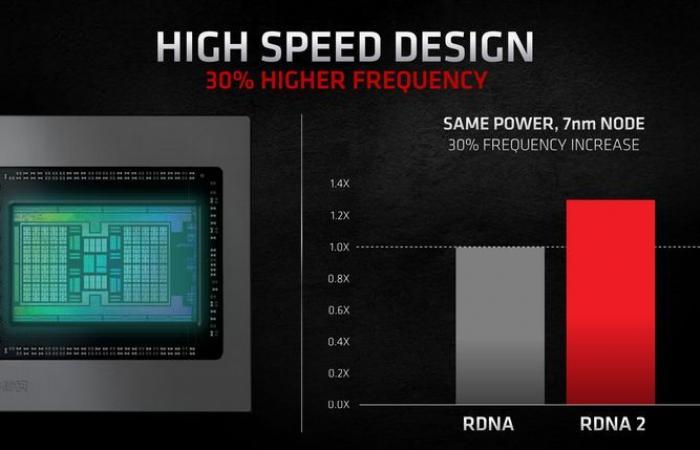 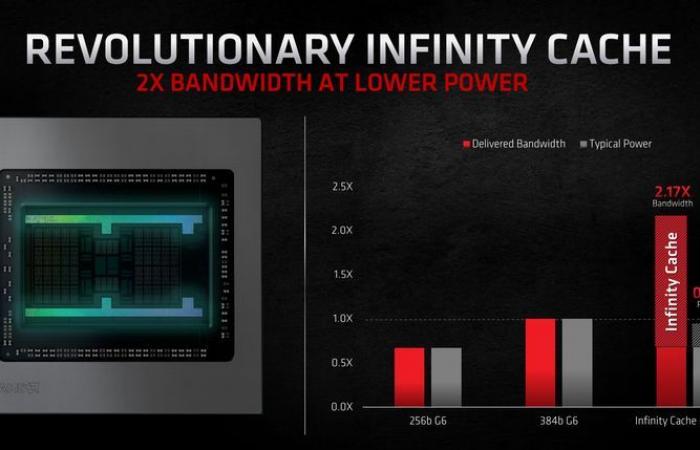 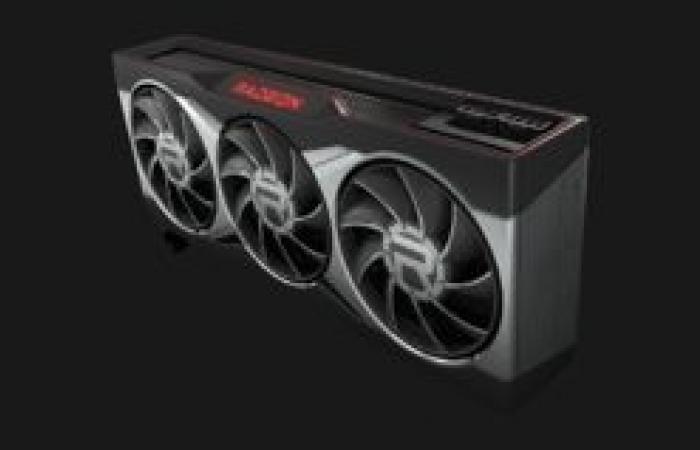 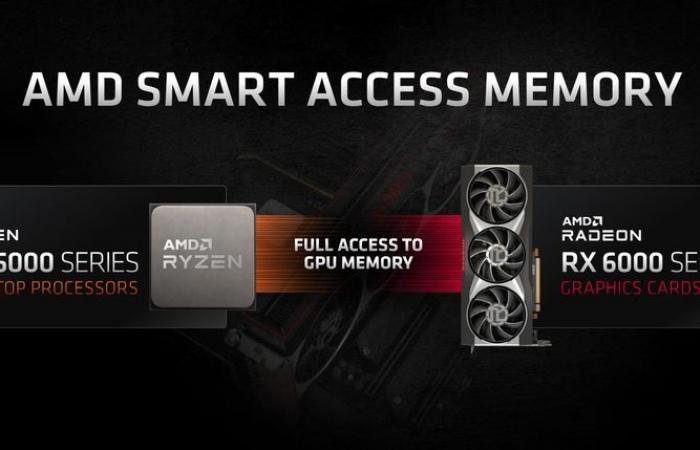 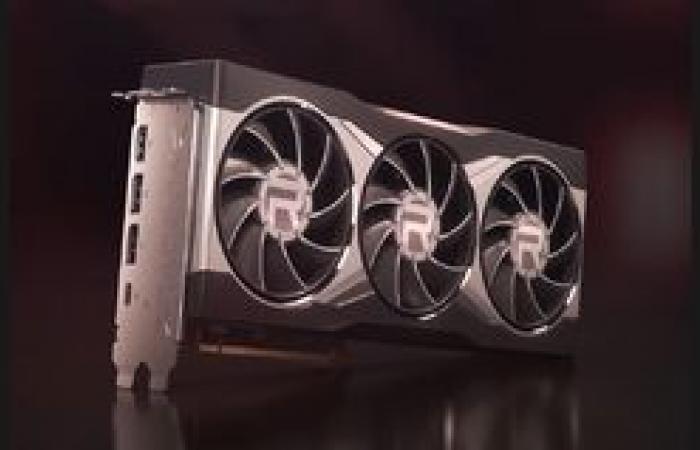 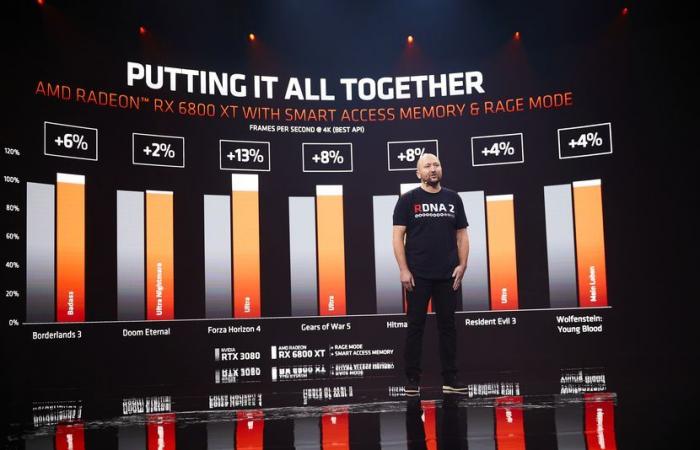 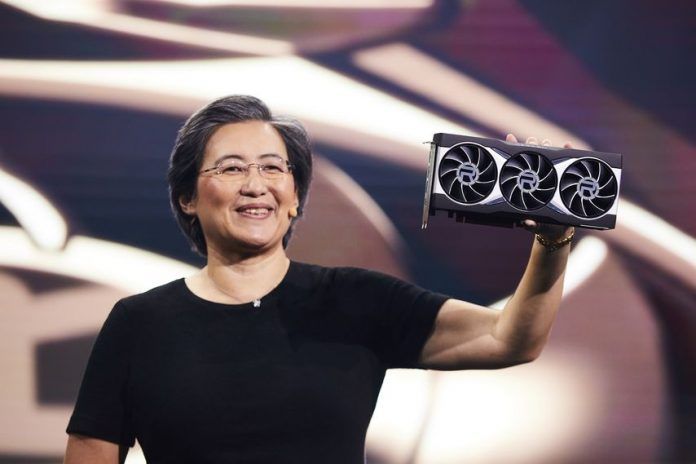 In September, barely its conference on Ryzen 5000 processors ended, AMD already announced its next deadline: October 28, for the presentation of its Radeon 6000 graphics cards. The 28 was yesterday, and the brand was as expected. at the rendezvous, for a virtual event which unveiled three new products. But if the Radeons “Big Navi” have revealed some of their characteristics, they also kept a part of mystery, in particular on the technologies which they will implement.

To read also | Buying guide: the best graphics cards for your pc

But let’s start with the basics: the specifications. Over 25 minutes of conference, AMD presented the Radeon RX 6800, 6800 XT and 6900 XT, each having in its viewfinder a product from the competition. The first thus aim to compete with the RTX 2080 Ti or the RTX 3070, more recent and which are located in the same perimeter of performance. To do this, they will be able to rely on 60 Compute Units (the fundamental blocks in the RDNA architecture), 128 MB of Infinity cache, 16 GB of GDDR6 memory associated with a 256-bit bus, and theoretical GPU frequencies announced between 1815 and 2105. MHz. On this basis, the second card is granted a CU and frequency bonus to fetch the RTX 3080 (72 CU, GPU between 2015 and 2250 MHz). Finally, the RX 6900 XT and its 80 CUs will have the difficult task of confronting the RTX 3090, queen of the new NVIDIA range.

From its first figures, we can already express three remarks: the first is AMD’s wish to finally come back to its competitor, by presenting a range that covers the entire spectrum of the new RTX Ampere. This hadn’t happened for a long time, so it was worth pointing out. We will see when the tests of its cards are published, if the brand’s hopes come true.

Second element to note: the frequency values ​​of “Big Navi” GPUs are experiencing a spectacular jump. Even if the Boost values ​​are undoubtedly subject to variation, the Game values ​​(more pragmatic) remain high, especially if we consider that the engraving process has not fundamentally changed (7 nm TSMC). The RX 6800 XT is thus given for a Game frequency of 2015 MHz. A figure significantly higher than the 1755 MHz of the previous RX 5700 XT. We remember that NVIDIA had marked the spirits with a similar advance between its Maxwell and Pascal chips, but the manufacturer had then been able to take advantage of improved engraving fineness, going from 28 to 16 nm. Without this favorable context, it will be interesting to see what technical levers have enabled AMD to make such progress.

Finally, a last surprise concerns the memory system. Instinctively, one could imagine that the RX 6800 XT and 6900 XT will be disadvantaged by a lower bandwidth than the competition, but it is the opposite that AMD seems to support, with as argument the gains brought by its Infinity technology. Cache, straight from his work on Ryzen chips. AMD did not see fit to detail how it works, but in mind, it is easy to imagine resizing the cache, so that it is used more often, synonymous with better performance and less bandwidth. passing to the upper hierarchical level of the memory system.

AMD is also highlighting its Smart Access Memory technology: the latter would be based on more direct communication between the processor and the GDDR6 memory of the graphics card, in order to promote performance in the game. You must of course be equipped with a Ryzen 5000 chip, and a compatible motherboard to take advantage of it (B550, X570 for the moment). Even if the gains are still to be explored (beyond what AMD announces), the principle of a greater synergy between Ryzen processor and Radeon graphics card is clearly an advantage compared to the competition. An asset all the stronger as Ryzen products are increasingly finding the favor of the crowds. 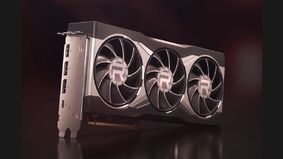 While NVIDIA has inaugurated some innovations in the design of its graphics cards (12-pin connector, original ventilation system), AMD seems to have chosen to stay in a classic register: the three cards thus have two external 8-pin PCI-Express connectors, and 4 outputs on the rear bracket: 1 HDMI, 2 DisplayPort and 1 USB Type C. Finally, cooling side, there is a large radiator surmounted by 3 axial fans. A design already seen 1000 times, and which should not reserve big surprises.

In this regard, it is good to remember that the devil, in this type of conference, often hides in what is not said, and from this point of view, one can wonder about the ray tracing performances of the new maps, which were not mentioned at all, or on the lack of exploitation of AI principles. Clearly, these will be important differentiators between AMD and NVIDIA on this generation. A few months ago, we could have considered ray tracing technology as secondary, and the quality of DLSS rendering questionable. But NVIDIA has made huge strides in both of these areas. DLSS 2.0 is today bluffing efficiency, whether by its visual quality or by the gains of frame rate that he authorizes. As for ray tracing, its integration into the latest consoles from Sony and Microsoft will undoubtedly accelerate its adoption. Efficient hardware support for this type of rendering is therefore very likely to become a major asset.

Either way, the raw performance shown by AMD looks solid (although it should be noted that the results presented by AMD for its 6900XT received a few boost, with Radeon Rage and Smart Access Memory enabled). As for their prices, the RX 6800, 6800 XT and 6900XT are respectively announced at 579, 649 and 999 dollars (excluding taxes), slightly below the launch prices of their competitors. However, these figures are not very important for the moment, as they will be dependent on available stocks, as the example of the launch of the RTX 3000 recently showed us. The two slower cards will be available in principle from November 18, when the queen of this generation “Big Navi” hits our shelves a few weeks later, on December 8.

To read also | Ryzen 5000: takeaways from the AMD conference

*The article has been translated based on the content of Source link by https://www.gamekult.com/actualite/radeon-big-navi-amd-signe-son-retour-sur-le-marche-des-gpu-haut-de-gamme-3050832993.html
. If there is any problem regarding the content, copyright, please leave a report below the article. We will try to process as quickly as possible to protect the rights of the author. Thank you very much!

These were the details of the news Radeon “Big Navi”: AMD signs its return to the high-end GPU... for this day. We hope that we have succeeded by giving you the full details and information. To follow all our news, you can subscribe to the alerts system or to one of our different systems to provide you with all that is new.