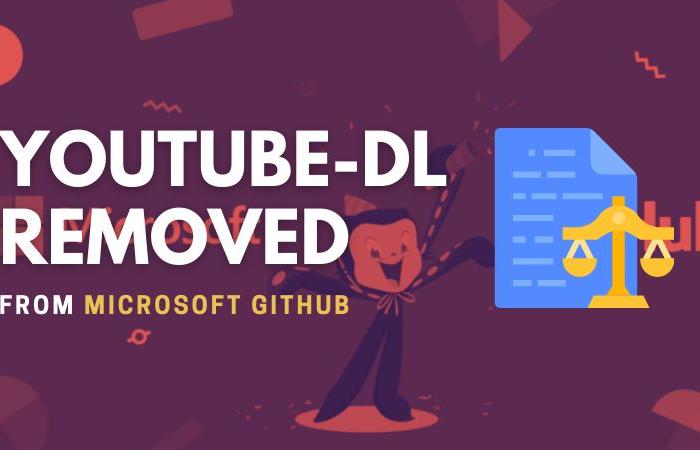 The open source youtube-dl project is one of the best tools for downloading videos from YouTube and many other video hosting websites.

But the existence of this project is currently in jeopardy. The Recording Industry Association of America, Inc. (RIAA) posted a notice on GitHub on October 23, 2020 against youtube-dl and its forked repositories.

Microsoft’s GitHub immediately met the requirements and within 24 hours the official youtube dl and its split repository were disabled as a DMCA deactivation.

What is a DMCA takedown?

If the rightful content owner (video, audio, text) believes that a particular website is using (or allowing others to use) the content without permission (violating the rights of the content owner), the owner can send a DMCA deactivation notification to the hosting service.

After receiving the DMCA deactivation notification, the hosting service can deactivate / delete the website (or the entire website).

There is also a contraindication where the other party can contest the shutdown.

“The clear purpose of this source code is to (i) bypass the technological safeguards used by authorized streaming services such as YouTube, and (ii) reproduce and distribute music videos and sound recordings from our member companies without permission for such use. We notice that the source code on GitHub is described as a “command line tool to download videos from YouTube.com and some other sites.”

The letter mentions how youtube-dl’s GitHub repository mentions that it is a program for downloading videos from YouTube.

Youtube-dl’s README had mentioned downloading videos from Justin Timberlake, Taylor Siwft, etc. in the command usage examples. This was also used in the notice to take action against youtube-dl.

Microsoft’s GitHub has checked the letter / turned it into a DMCA notice and disabled youtube-dl and seventeen other repositories mentioned in the letter.

John Bergmayer, Legal Director at Public Knowledge, says that it is not a claim that youtube-dl is hurtful work, but the RIAA claim is that it is illegal.

What is youtube-dl in store?

The youtube-dl team should certainly file a counter-complaint as it does not provide users with any copyrighted content directly.

But there are a few things you should make sure of:

youtube-dl is used by many other tools and websites to download videos from YouTube and other video hosting websites.

This may sound like piracy, but it may not always be the case. Some video artists make their videos available under the Creative Commons license for others to use that work.

Downloading such copyright free videos via youtube-dl shouldn’t be a problem.

Many people around the world have limited internet connections. Downloading educational videos so they can access them later without using up bandwidth is a real use of such a tool.

Was it fair to turn off youtbe-dl?

I’m surprised at how quickly Microsoft GitHub took action on this case. You pinched so easily.

Imagine a bunch of DMCA trolls sending notifications to other projects under the pretext of copyright. This is one possibility. Remember how a patent troll tried to extort money from GNOME’s Shotwell image viewer program.

I hope that the youtube-dl team will counteract the takedown and not give in to the pressure.

I know this is an open source project and its code can be hosted on an alternative GitHub website like GitLab. However, RIAA is a powerful organization and can pressure other code hosting websites to remove YouTube DLL repositories. The repeated shutdowns can also lead developers to abandon the project.

I’ve always wondered why YouTube isn’t giving video artists the option to make their videos available for download either for free or for a fee.

What do you think of the entire episode? Do you think the takedown is correct? Express your views.

These were the details of the news Microsoft GitHub Disables the open source project youtube-dl for this day. We hope that we have succeeded by giving you the full details and information. To follow all our news, you can subscribe to the alerts system or to one of our different systems to provide you with all that is new.