Expedia Group’s CEO on the future of travel and why big... 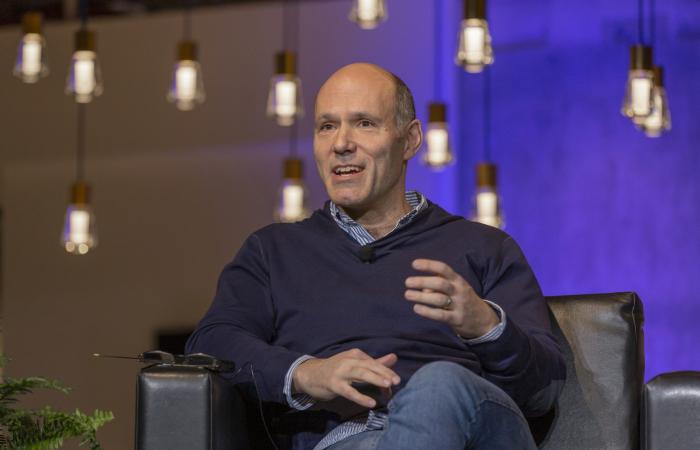 “The day they announce a vaccine that people really believe in will be our highest booking day in history.”

That was Peter Kern, the CEO of Expedia Group, the Seattle-based online travel giant, who spoke at the GeekWire Summit this week.

In this episode of the GeekWire podcast, we present highlights from our conversation with Kern about the future of travel and big cities, as well as his thoughts on virtual travel. In addition to the flagship Expedia.com, the Expedia group also includes major travel brands such as vrbo, Orbitz, Hotwire, Trivago, Hotels.com and Egencia.

But we started with the big news of the day, the US government’s antitrust complaint against Google. The case highlights the difficult position Expedia and many other companies are in, competing with Google while relying on and paying the search giant to direct customers to their services.

Listen below and read on to find edited highlights. Subscribe to the GeekWire podcast on any podcast app. Our full conversation and other GeekWire Summit sessions are available upon request exclusively to attendees of the virtual event, which runs on Tuesdays and Thursdays through October 29th. Register here.

Todd Bishop: Can you provide your reaction to the Justice Department complaint against Google?

But Google is what Google is until it is something else. And we have to stick to the rules of the game as they exist. So we always have to do what we have to do to optimize against the rules of the game. But I am very happy that the government is finally doing something. And hopefully it creates a fairer marketplace for us, which is all we want. We have no ax against Google except that we don’t think the market is fair. That’s all we want Whether this has hurt us and whether we have been harmed by it in the past is another discussion. But we want fair competition and we think we will win on fair competition. And that’s what we’re looking for.

TB: Incidentally, we should note that in its statement today, Google described the action as “deeply flawed” and “doubtful” and that users are using Google because they choose to do it, not because they are forced to or because they do it can. “T find alternatives. It was noteworthy in the recent antitrust report by the House Judiciary Committee that they made this very clear in their allegations. Quoting anonymous market participants, they said that when traveling online, Google “is deceptively distracting internet traffic from its vertical competitors, forcing them to pay more for search engine monetization and advertising, and that its vertical competitors provide their inventory feed to to fill the ads that allow Google to access the valuable inventory data of the relevant vertical service providers. “Is that about right from your point of view based on what you see?

Peter Kern: I think there is definitely the truth in all of these statements. I think Google would say they do what the consumer wants, they always tell us that. It makes a better auction or it makes better information. We believe that through their practices they inevitably make it harder for the people who paid to give them the right to keep making it harder for us. And it’s a prisoner’s dilemma no matter how much you participate or not, and what that means for your own business as you try to change the dynamics of their auctions and other things. So I won’t go into the details. That wasn’t my quote. But I think the government has a lot of the right problems and no doubt it is backed by a lot of market participants who give them input. And again, our goal is just a fair fight. We have no ax against anyone we do business with or any of our competitors. We just want a fair fight.

TB: Let’s talk about travel, the essence of your business. At the start of the pandemic, things were basically shut down. We are still seeing huge restrictions on traveling across borders. We saw some recovery in air travel and a little in hotels. And obviously vacation rentals came as a surprise, including vrbo, owned by the Expedia Group. Can you give us an impression of your sketch of where Reisen is today? And where do you see it in the next 12 to 18 months in the context of COVID-19?

Peter Kern: The good news is that travel is finding a way people really want to travel. I wrote a note to our staff over the weekend that it is easy to be pessimistic but if you asked me and said there was going to be a global pandemic with this death rate etc and this transmission rate etc you know you, what would travel be, I would have guessed it would have been much worse than what we see and observe in the world. And I think that’s because people are finding a way, whether they’re driving an hour away from home or flying domestic or whatever, they’re finding ways to change venues and get a break from their daily routine.

I certainly think that having these parameters set at the beginning is better than expected. We’ve definitely seen that the alternative market for vrbo is strong. And I’m sure our friends at Airbnb see similar strengths. Even our friends at [Booking Holdings] have seen their alternative business strengthen. So that was a relative silver lining or use case, let’s say that’s very attractive right now.

The hotel industry has followed the trends of the world. When places open more they grow, when places close they tend to contract a little. But I kept it. The air was tougher, mostly because the foreign country is gone, but I think people are more comfortable with air travel. It is pretty safe. All of the science suggests that it is very safe to be a modern airplane. If you follow the protocols. And safer than many of the things people do every day, be it a bar, gym, restaurant or office.

I think as far as we go, I don’t think we’re going anywhere great until a vaccine comes out. And hopefully people all over the world will trust and embrace it and probably still abide by a number of safety rules etc.

I don’t know when it will be announced. But the day it announces a vaccine that people really believe in will be our highest booking day in history. In fact, many people have booked trips for the next summer. On the cruises trips were booked for summer trips, next year, etc. Because people want to make sure they got their trip booked asap. Again I think it’s a testament to the spirit of people traveling and going away and wanting to see things and I think that’s the best predictor of our future no matter how long this pandemic stays with us.

TB: I know you’re a big fan of big cities too, you grew up in New York and have obviously spent time in many European cities. What is the future of the big cities in all of this? Is there also the status quo back?

Peter Kern: I think so. … Cities are extremely compelling. They convince with their energy, for the employment opportunities, for all kinds of things. I don’t think people really want to work from home 24/7, you know, five days a week or whatever. I think people need offices, they need interaction, they need interaction to drive creativity and a lot of things. I think this is kind of a reactionary moment where people are scared, maybe they have young children, maybe they are in a situation where they just think it’s worse, but people really think cities are Problem, that’s why the pandemics are a problem that cities exist? I do not believe that.

I think people choose cities for what they give and cities give a unique thing, the restaurants, the museums, the sights, the whole. And I just think they’re coming back. If I were a bettor, I’d sell Connecticut real estate and buy New York apartments. There is a moment when everyone is running because they want space and they want outside and they want some freedom. And I understand. I’m in Wyoming. I’m lucky now. But I think it will look just like traveling. I think cities will come back.

TB: So just to push back a little. Amazon has launched a virtual tourism service with Amazon Explore. This is where you can make fun of a geek. Because I experienced Quebec City, I’d never been there from a tour guide’s selfie stick. She went around and showed me the place, lived one on one. It was pretty cool. No, that wasn’t real. And I understand what you are saying But now it was better than nothing. And I was wondering why Expedia – one of the Expedia brands – doesn’t do that.

Peter Kern: Well I think if you look around you don’t need Amazon for that. There is tons of content from museums, guides and other things. I sent one to my team that I saw. The National Gallery in London has published their Live Art Talks. And I saw one on Caravaggio and Canaletto. And all it did for me, and I bet you, is that I want to go there. It didn’t make me see any more of them. I wanted to get on a plane and go to London. Quebec City is beautiful. I suppose you saw this and said, “Boy, I should go to Quebec City sometime.” Is this a good way to encourage travel? For sure. Is this a substitute for travel? I do not believe that.

For some people, it might be better than nothing. And in the land of the pandemic, it can be better than nothing. And the reason we haven’t overwhelmed ourselves is because we focus on the things that are important to long-term travel, not a temporary slip, not a pandemic moment. I certainly don’t think that virtual travel, whatever the form, will take the place of travel. Will it be advertising for travel now? Will we sometimes share videos or do some things for our customers to motivate them? Sure, this might be a very reasonable idea, but the idea that it will replace it must lead to a different view of what humanity is all about and what people need and want. And at least I’m not ready to do this after having been on the planet for so many years.

[The full interview with Kern, and other GeekWire Summit sessions, are available on-demand exclusively to attendees of the virtual event. Learn more and register here.]

Podcast produced by Curt Milton. The theme music is by Daniel LK Caldwell.

These were the details of the news Expedia Group’s CEO on the future of travel and why big... for this day. We hope that we have succeeded by giving you the full details and information. To follow all our news, you can subscribe to the alerts system or to one of our different systems to provide you with all that is new.