The first satellite to reach Earth’s orbit is equipped with artificial... 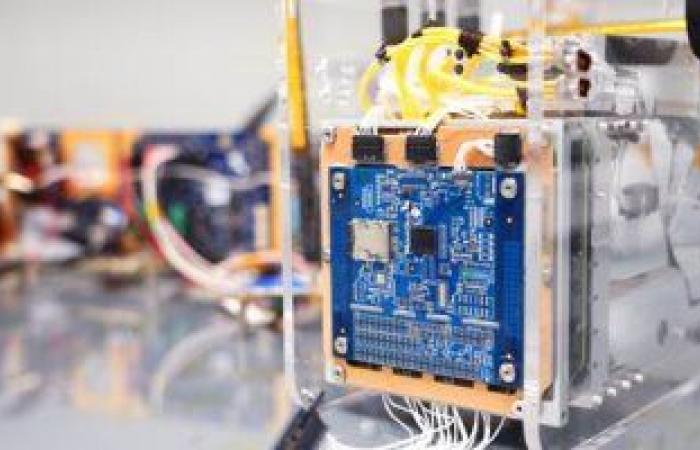 Despite the widespread availability of AI technologies in all aspects of contemporary life, from enhancing our understanding of space to browsing entertainment videos on mobile phones; However, AI applications have not been widely used in orbital space.

This continued until September 2, when a small satellite the size of a breakfast cereal box was launched using one of the space missiles along with 45 similar satellites in Earth orbit. The satellite, called PhiSat-1, is currently flying at an altitude of 329 miles (530 kilometers), at a speed of 17,000 miles per hour (27,500 kilometers per hour), in a sun-synchronous orbit.

(The word “satellite” might lead one to believe that it is roughly the size of a home refrigerator or school bus, but this satellite can in fact be placed in a backpack).

The PhiSat-1 satellite contains a new hyperspectral thermal camera and enables AI-based processing capabilities thanks to the Movidius ™ Myriad ™ 2 optical processing unit from Intel, which is currently used in many smart cameras, and even in aircraft without Pilot assigned to take selfies, valued at $ 99. PhiSat-1 is one of two satellites launched on a mission to monitor polar ice and soil moisture levels, as well as to test inter-satellite communication systems with the aim of creating a future network of unified satellites.

The first problem that the Myriad 2 processor helps solve is how to deal with large amounts of data generated by high-resolution cameras such as the cameras used in the PhiSat-1 satellite. “The ability of sensors to generate data increases by 100 times with each generation, while our capacity increases,” said Gianluca Furano, director of data systems and computing on board spacecraft at the European Space Agency, which led the collaborative effort to launch the PhiSat-1 satellite. To be downloaded three, four or five times in each generation. “

Clouds cover about two-thirds of the surface of our planet at all times, which leads to many useless images of clouds being captured, saved and sent over the broadband link to Earth, to be saved and reviewed by a scientist (or algorithms) hours or days later, and then deleted. in the end.

Furano explained this idea by saying: “Like the heroic knights in American western films, the use of artificial intelligence in orbital space provides us with the necessary solutions.” The idea that the working group came up with was to use processing techniques on board the satellite to identify and ignore low-resolution images due to clouds, thus providing about 30% of the capabilities of broadband communication.

The emerging Irish company, Ubotica, developed and tested AI technologies on the PhiSat-1 satellite, collaborating closely with Cosine, the camera manufacturer. Together with the University of Pisa and Singerguez to develop a comprehensive solution. “Outer space is the ultimate human endpoint,” said Ubri Dunn, Chief Technology Officer at Ubotica. “Myriad’s first-stage processor was specifically designed to provide amazing computing power with the least amount of energy possible, which is very well suited for use in space applications.”

However, the Myriad 2 processor is not designed for use in orbital space. Computers in spacecraft typically use dedicated processors that can resist cosmic rays that can lag two decades from cutting-edge commercial technologies, according to Ubrey Dawn. Until recently, AI was not an option.

For this reason, Dawn and the Ubotica team made a diagnosis of cosmic ray effects on the Myriad processor by running a series of tests to see its ability to withstand any errors that might occur or withstand the factors of wear and tear.

About that, Furano said, “Never before has the European Space Agency tested a very complex processor to see its ability to resist radiation. We doubted that we could properly test it, and we had to start from scratch preparing a manual on how to conduct a comprehensive test and diagnose the capacity of this processor.” .

The first test, which was held at the headquarters of the European Organization for Nuclear Research (CERN) at the end of 2018, involved exposing the processor to radiation beams for 36 continuous hours, which represents “test conditions under extreme pressure,” according to Dawn. However, the results of this and the two tests afterwards were “positive for us.” The Myriad 2 processor passed these tests without any modifications.

Soon, this low-power, high-efficiency optical computational processor was ready for use outside of Earth’s atmosphere. But he had another challenge.

AI algorithms are usually created and “trained” using huge amounts of data to give them the ability to “learn”, and thus distinguish between images of clouds in this case. And because the camera used was completely new, the team did not have any data for this case, according to Furano, who said: “We had to train our application on artificial data that we extracted from our current space missions.”

It took four months to integrate and test this system and programs, despite the participation of 6 different institutions in the process from different parts of Europe. “We were very proud of our ability to install all the devices and equipment on the satellite with high speed and flexibility, during this short period of time,” said Max Bastina, PhiSat Project Manager at the European Space Agency. Regarding the development of the spacecraft, Furano believes that the timetable for completing the project is a real “miracle”.

“Intel has provided us with additional support, which is a much-needed Myriad processor to enable the AI ​​technologies on PhiSat-1 to use the CVAI technology we have developed, which is very much appreciated by us,” said Obry Dunn.

Unfortunately, a host of events unrelated to the project – exemplified by the delays related to the space rocket, the spread of the Covid-19 virus, and the unfavorable summer winds – led to the team being delayed for more than a year before the satellite’s ability to operate in outer space was known. It was planned.

The launch on September 2 from the launch pad in French Guiana – the first of its kind to launch a satellite operated by Ariane Space – took place quickly and without any errors. In order to carry out the first verification of its work, the satellite saved all the images and recorded the decisions made by the AI ​​about the detection of clouds for each image, which allowed the team working on the ground to verify that the computer worked as expected.

After waiting and waiting for three weeks, Bastina was able to say: “We have succeeded in entering space history.”

The European Space Agency announced that the joint team “unveiled the first devices for monitoring the Earth from orbital space to be accelerated using artificial intelligence techniques.”

By sending only useful pixels, the satellite will now “improve the use of broadband communications and significantly reduce the overall costs of connecting to the Earth” – as well as save scientists’ time on the planet.

Looking forward, the use of small, low-cost, AI-augmented satellites has many benefits, especially when equipped with the ability to run multiple applications.

“Instead of allocating devices on the satellite to perform a single function, it became possible to switch networks to perform tasks inside and outside the satellite,” said Jonathan Byrne, Director of Intel Movidius Technologies. Don called this “satellite as a service.”

Much of this potential will be tested shortly, as the European Space Agency cooperates with Eubotica to develop the PhiSat-2 satellite, which in turn will carry a Myriad 2 chip, to launch it into Earth orbit. The PhiSat-2 satellite “will be able to run AI applications that can be easily developed and installed, as well as validate and operate them on board spacecraft while in flight using a simple user interface.”

These were the details of the news The first satellite to reach Earth’s orbit is equipped with artificial... for this day. We hope that we have succeeded by giving you the full details and information. To follow all our news, you can subscribe to the alerts system or to one of our different systems to provide you with all that is new.