Unveiling of a new iPhone with ultra-fast chip from an ASML... 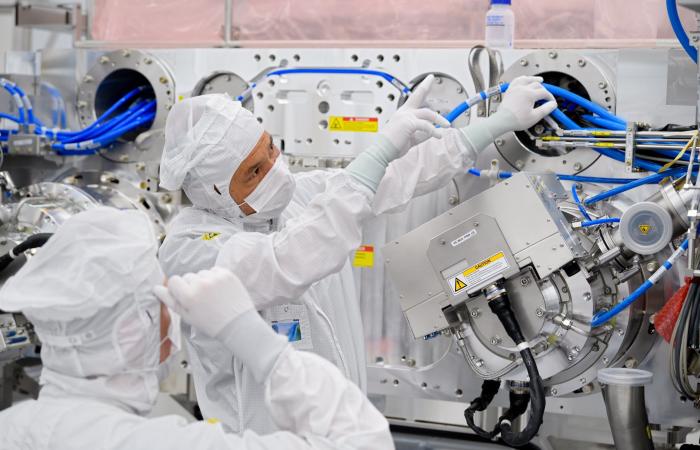 The time has finally come: This evening at 7 p.m. Apple is expected to announce that the iPhone with a chip from ASML’s latest chip machine will go on sale in November. This chip is a true technological masterpiece from Veldhoven, that obscure little village in the shadow of the Dutch city of Eindhoven. You have achieved something that no other tech company in the world can achieve.

China is not allowed to buy the machine as US President Donald Trump fears the technology will be used for military purposes. This is frustrating for the Chinese, who are pioneers in ultra-fast data communication over 5G and their telecommunications company Huawei. Apple may have outperformed Huawei after installing this latest ASML machine (which costs up to 100 million euros) in its factories.

The ASML machine, which is sold under the code name ‘NXE3400’, uses extreme ultraviolet light (EUV for short) to make the chip. EUV is a type of light that of course cannot exist on earth, according to ASML spokesman Sander Hofman. The reason is that it is so fragile that it is absorbed into the air immediately after it is formed. However, it can be found in space.

Vacuum space in the chuck

For this reason the light is generated in a vacuum space inside the machine. It is created by shooting laser light at a drop of sheet metal. This causes it to evaporate. This evaporation then releases light of various wavelengths, including extreme ultraviolet light, which has an extremely short wavelength of 13.5 nanometers.

The light is reflected by a series of mirrors in the machine and shone through a mold. (A BBC article published yesterday incorrectly stated that the EUV also passed a lens. This is impossible, Hofman explains, because the lens material would absorb the extreme ultraviolet light.) This shape is the blueprint for the circuitry chip that are burned onto the lens.

How exactly does this burn process work? This is another complicated process. The chip is made of silicon. The machine applies a photosensitive layer. The EUV light that shines through the mold onto the layer then burns the pattern of the circuits onto the chip.

The picture above shows how this works. The violet ray is the EUV light. This light was radiated through a mold until patterns appear in the light. (You cannot see it with the naked eye.) The disk is made of silicon covered with a light-sensitive layer. The small rectangular planes on the plate are all separate chips that are irradiated by the EUV beam.

One hundred layers for 8 billion circuits

The chip that came with the iPhone 12 is made up of one hundred extremely thin layers with separate patterns (all of which are burned in with EUV) to perform separate digital processes and commands.

In total, the chip has 8 billion circuits (transistors) that are electrically activated to transfer millions of zeros and ones. Because the chips in the NXE3400 are so sophisticated, the amount of current flowing through them that activates them is much less than chips made with other types of chip machines.

An article published yesterday by the British BBC broadcaster said that the chip in the new iPhone enables the processing of enormous amounts of data that have previously reached the phone via the cloud.

This means that you can record and edit movies on your phone, for example, as it can handle large files and the processing power is extremely high. You don’t even need files from a virtual network anymore.

That’s good news too. After all, data traffic via the cloud – and thus also via data centers – consumes more than a hundred thousand times the amount of energy required for data processing on the device itself.

These were the details of the news Unveiling of a new iPhone with ultra-fast chip from an ASML... for this day. We hope that we have succeeded by giving you the full details and information. To follow all our news, you can subscribe to the alerts system or to one of our different systems to provide you with all that is new.