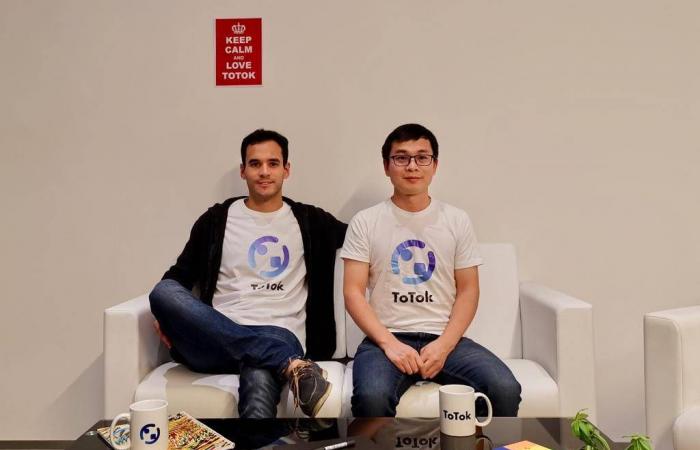 Thank you for reading the news about ToTok app founders 'disappointed' by Google warning notification, ask users to ignore it and now with the details

Aden - Yasmine El Tohamy - The co-founders of free video calls app, ToTok, responded to Google and Apple's removal of the popular app from their online stores, again, and asking users to delete the app as it allegedly spies on users.

In a statement issued on Thursday, co-founders Giac and Long said that they were disappointed with the app being removed from Play Store and App store, urging users to ignore the Google notification.

They added that the ban was yet another attack on the company and reiterated that the app was safe to use, and that the company was committed to safeguarding the privacy and security of its users.

We have been informed that some of our Android users are being solicited by Google to delete ToTok from their phones.

We invite you to ignore the Google notification and continue to enjoy ToTok, which is entirely safe and secure. This is an automated response notification when Google temporarily removes an app from their store. We are working collaboratively to rectify perceived technical deficiencies and hope to have the app reinstated shortly.

ToTok is free, fantastic, and legitimate. ToTok was allowed as a pilot project as we met all the UAE requirements to operate in the country. We much appreciate the opportunity you're giving us to serve you.

Having always been driven by ethical principles of honesty, transparency and fairness, we will continue to serve you and keep developing even better products and services.

Furthermore, strong in our innocence, we are considering all forms of engagement including potential legal action to protect our company from any form of defamatory and unwarranted aggression.

With reference to the recent removal of ToTok from the Google Play Store and the Apple App Store, we, the ToTok co-founders, want to express our deepest concern and disappointment for yet another attack perpetrated against our company by those who hold a dominant position in this market.

First of all, we want to inform all our new users with Samsung, Huawei, Xiaomi and Oppo phones, that ToTok remains available in their phone maker's app stores. All other Android users can install the ToTok app safely from our official website (click here).

We see no legitimate reason for this new ToTok ban.

After connecting tens of millions of users across hundreds of countries and becoming one of the fastest-growing apps globally, a storm of false accusations and outright lies triggered the ban by Apple. Despite the strong blow, the love and loyalty of our community remained intact as we kept experiencing a robust growth on Google Play and other app stores.

Eventually, this could not last.

Once again, the future of our company is at risk due to the unwarranted actions of Apple and Google, those on whom the worldwide developer community relies on, and whose dual role as competitor and operator of the app stores should, after yet another case, raise some concerns among regulators.

The sudden removal of our app from the two app stores, in the absence of any evidence, speak clearly about the lack of impartiality and fairness of Apple and Google towards the developer community and, ultimately, towards their and our customers.

Resolute in our innocence, over the past few weeks, we have taken great pains to ensure adherence to Apple and Google policies and requirements and we are firmly convinced of being in technical and contractual compliance with all of our obligations.

We have always been committed to safeguarding the privacy and security of our users by aligning our app to industry best practices (private CA system; all data is strongly encrypted by AES256; all transmission channel is well protected by RSA2048; call data is double encrypted by private protocol beyond the encryption channel) and complying with local and international applicable laws.

Being devoted to transparency, we have also invited Apple and Google teams to meet us and visit our office in person, in the hope of clearing any existing concerns.

Making things worse, over the past months, we have witnessed the proliferation of ToTok clone apps. Apps without any apparent working functionality that, mimicking our brand logo and name, have deceived unsuspecting users, exposing their data and stealing their money. Despite their manifest fraudulent nature, these apps have been approved and made free to circulate on the app stores, highlighting, once again, the evident flaw in the app approval process, which is used by the two giants as a tool to impose their control over the market.

In spite of injustices, and driven by our ethical principles, we will continue to serve our community at the best of our capabilities, maintaining users' privacy and security as our top priorities. There is no end to security enhancement, and we are always working to improve it in addition to building many other new user features.

Our openness, honesty and transparency are the reasons why ToTok has such a vibrant and loyal user community globally. We will keep communicating directly with our community on any updates, concerns, and facts.

These were the details of the news ToTok app founders 'disappointed' by Google warning notification, ask users to ignore it for this day. We hope that we have succeeded by giving you the full details and information. To follow all our news, you can subscribe to the alerts system or to one of our different systems to provide you with all that is new.