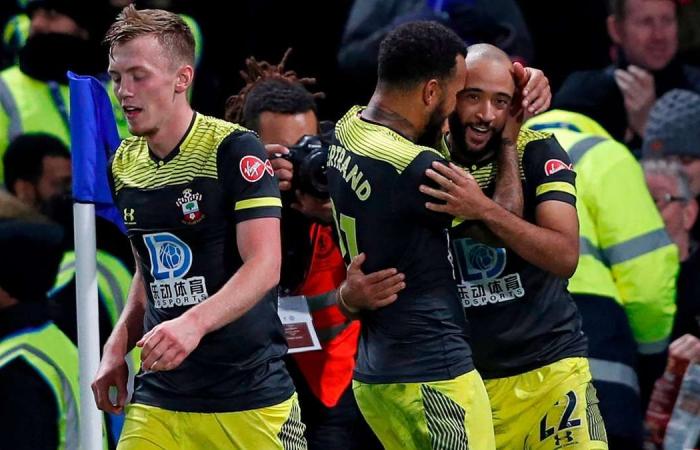 Hind Al Soulia - Riyadh - Frank Lampard has demanded Chelsea find answers to their problematic home form after falling to a shock 2-0 defeat to Southampton at Stamford Bridge on Thursday.

Lampard's young side kicked off on the back of a tactically inspired victory away to his mentor Jose Mourinho's Tottenham Hotspur that banished temporarily the bad memories of the home defeat by injury-ravaged Bournemouth.

But this Boxing Day clash saw another south coast side in Southampton enjoy success at Stamford Bridge against Chelsea, who have now lost five of their last seven Premier League matches.

Michael Obafemi put the Saints ahead in the 31st minute with the second Premier League goal of his career and Nathan Redmond made it 2-0 to the visitors some 17 minutes from time.

"Teams are making it difficult here," Lampard told the BBC. "We are not making enough chances, we were at the beginning of the season. We are being asked a different question at home. At the moment we are not answering them. We do not manage to pick up that final pass.

"Against Tottenham we had space to make runs and today we had none. It changes things. We did not do it right today. I think If at the start of the season we would have been happy where we are. We are good away but we have to make it difficult to come here."

Redmond believes the win is testament to Southampton's ability to stick together as a team following a start to the season that saw them mired in the relegation zone.

"It was a great team effort and we stuck to the game plan," he said. "It's always good to win on the road. I think it’s that cliche of sticking together. We know they have good players but so do we and it came down to hard work.

"We know it is going to be tough but we stuck together. When you are in the moment of the game, you are so focused of keeping the ball. It was a great team goal and sums up what we have been working on. All teams go through spells and it’s important to stick to game plans, especially away from home. We took the momentum from last week and added to it."

While Southampton pulled away from the bottom three, Norwich City sunk to the foot of the table after a 1-0 defeat away at fellow strugglers Aston Villa.

Conor Hourihane scored the only goal of the game at Villa Park to move Villa within one point of safety following 17th-placed West Ham United's 2-1 defeat at Crystal Palace.

Robert Snodgrass had given West Ham the lead in the 57th-minute at Selhurst Park, only for Cheikhou Kouyate to level against his former club 11 minutes later. Jordan Ayew then scored a goal-of-the-season contender when he danced through the West Ham defence and chipped his finish over goalkeeper Roberto in the final minute of the game.

These were the details of the news Frank Lampard seeks answers to poor home form after Southampton shock Chelsea for this day. We hope that we have succeeded by giving you the full details and information. To follow all our news, you can subscribe to the alerts system or to one of our different systems to provide you with all that is new.

PREV The three-way hook against the bombers as the end of trading...
NEXT FilGoal | News | Faraj Amer: We are negotiating...