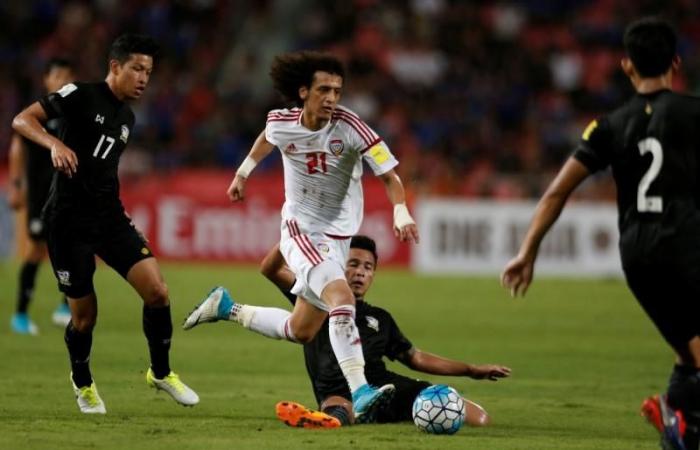 Long-time followers of European football, and football transfer rumors, will recognize the old — and long-past funny — joke about the Dutch midfielder linked for years with a move to Old Trafford. It never happened. But the joke lives on in the world of social media.

The closest equivalent to Schneider — in terms of transfer rumors — in the Middle East is UAE superstar Omar Abdulrahman, who has consistently been rumored to be on the way to… well, anywhere in Europe really.

Ever since he first marked himself as an exceptional talent over a decade ago, he has been hyped as potentially being the first GCC player to “make it” in one of Europe’s major leagues — or, indeed, a minor one.

Neither has happened. But, again, the story lives on in the world of social media. That big move, it seems, constantly beckoning the bushy-haired midfielder.

On Monday, there were reports that the Indian Super League (ISL) club Atletico de Kolkota (ATK) is interested in the man Emirati fans affectionately call “Amoory.”

In truth, there was little substance to these rumors — not least because of salary issues —but that did not prevent online speculation about the possibility of Al-Jazira’s Abdulrahman making a move east, instead of that long-anticipated move west.

Some fans were incredulous, others excited. Many journalists who have covered his career at close quarters simply dismissed the suggestion.

For many of us who have hoped for a European adventure for this unique footballer, there is an element of sadness to the latest rumors. With all due respect to the ISL, not to mention the Arabian Gulf League itself, it was not long ago that Abdulrahman was being linked with a move to the dizzy heights of the Premier League, the Bundesliga or La Liga.

Now aged 28, and slowly regaining his fitness after a serious injury, it seems the window for that groundbreaking move has now closed. But it was a window that, for Abdulrahman, opened earlier, and for longer, than most Gulf-based players could even dream of.

Abdulrahman was born in Saudi Arabia to parents of Yemeni origin, and between the ages of nine and 14 he was part of Al-Hilal’s youth set up. He moved to the UAE at the age of 15, joining Al-Ain in 2005, along with his brothers, Mohammed and Khalid.

Straight away he stood out, both at Al-Ain and as part of various age groups for the UAE national team, often under the avuncular eye of coach Mahdi Ali.

He was instrumental in the UAE’s qualification for the 2012 Olympics in London, where he excelled against Uruguay, Senegal and Great Britain. A watching Wayne Rooney even heaped praise on the young Emirati.

It was then that the “Go west, young man” campaign began. A trial at Manchester City led nowhere, but teased the possibility that he might, at some point, end up at the Abu Dhabi-owned club, or even one of its rivals.

As he progressed, along with many of his Olympic teammates and coach Ali, to the senior squad, glory beckoned. Omar was sensational at the 2013 Gulf Cup in Bahrain, scoring in the final as the UAE beat Iraq 2-1 after extra time to win the competition for only the second time.

He was 21 then, and a move to Europe at that point would have given him plenty of time to adjust to a new culture, maybe even at one of the less-glamorous clubs or leagues. Time was still very much on his side.

But Abdulrahman was excelling with Al-Ain, where he would end up winning four league titles, three President’s Cups and one League Cup.

Adored by the fans, enjoying his football, and with a clear sense of loyalty to the club and its management, you could hardly blame him for wanting to stay put. But. He was clearly capable of playing at a higher level. A brave decision at that point could not only have altered the path of Abdulrahman’s career, but set an example for other GCC footballers.

As it stands, the peak of his career — so far, at least — came in early 2015 at the AFC Asian Cup in Australia.

Watching him take on the continent’s best was a pleasure for those of us present. After every match, more and more local fans would wait to get an autograph and selfie with Abdulrahman. The media were smitten too. “Why have you kept this guy a secret?” they would ask his proud coach. “Will he go to Europe? Would he consider a move to Australia even?”

In the quarterfinals against Japan in Sydney, the UAE heroically held on for 1-1 draw and a penalty shootout after it looked like the reigning champions would simply overwhelm them in the closing stages.

First up was Abdulrahman. A few casual steps, an absurdly cool Panenka penalty, and the UAE were in the lead. The golden boy had set his nation on the road to arguably its greatest-ever result, achieved just a few minutes later.

On the morning of the semi-final against hosts Australia in Newcastle, a local publication printed the rallying cry “Stop this Man” above a photo of Abdulrahman. He was now an international superstar. Sadly the UAE lost the clash 2-0, with the main man marked out of the match by a well-organized Australian team. The UAE would go on to finish third and Abdulrahman, though not officially the player of the tournament, was undoubtedly its biggest revelation.

This, it seemed, was it. The clamor for a move to Europe was at its peak. There were rumors of interest from Germany (as well as for his UAE teammate — the competition's top scorer Ali Mabkhout). Now aged 24, surely the stars had aligned for Abdulrahman.

Weeks later, though, he signed a new big-money contract with Al-Ain, and hopes of a move to Europe were dashed. But the links would continue — especially after Abdulrahman was crowned Asian Footballer of the Year in 2016.

Instead, there was a loan move to Saudi Professional League club Al-Hilal in 2018, which at least raised hopes that Abdulrahman might be part of an AFC Champions League-winning team — something that had eluded him up to that point.

Al-Hilal did indeed claim the 2019 continental title, but without Amoory. A serious injury just five matches into his Saudi adventure put an end to his time there — and to his chances of playing for his country in the 2019 AFC Asian Cup, hosted by the UAE.

A return to the UAE and Al-Jazira at the start of the 2019-20 season saw him reunited with close friend Mabkhout. Now approaching 29 and with football brought to standstill because of the coronavirus crisis, both remain firmly on familiar ground, and Europe is seemingly a distant dream.

But what about Asia? His stint at Al-Hilal did not work out, but there could be time for one last move in a career that has delivered plenty, but promised so much more? If history is anything to go by, the answer is no. Abdulrahman is going nowhere. And that is not, as some may suggest, due to a lack of ambition. The UAE’s finest player of the last decade is fiercely patriotic and loyal, and — quite simply — he has always looked happiest at home. Only he will know if that big move to Europe was ever really on the cards.

Many will be disappointed that Omar Abdulrahman never gave it a shot abroad. Crucially, he may not be among them. Perhaps it is time for the rest of us to just let him be.

These were the details of the news Emirati star Omar Abdulrahman’s long-anticipated European move seems ever more unlikely for this day. We hope that we have succeeded by giving you the full details and information. To follow all our news, you can subscribe to the alerts system or to one of our different systems to provide you with all that is new.